And so another year approaches its conclusion and the pandemic seemingly isn't done with us yet. I had to self-isolate after a positive test myself for a couple of weeks (no symptoms, though) but if there's one thing that doesn't interrupt, it's blogging, so everything went smoothly here. But now it's time for what's becoming a traditional look at the paleontological discoveries of the past year that didn't get covered here but are worthy of at least a brief mention.

When we think of vertebrate fossils, the first thing that pops to mind is almost certainly going to be a skeleton of some kind, or perhaps just part of one. But there are also such things as ichnofossils - fossilised remains of how an animal affected its environment that no longer include any physical part of the animal itself. Perhaps the most obvious of these are fossil trackways - footprints of long-gone animals preserved in mud or other soft material that has since turned to stone. A study published this year examined the tracks left by two species of fossil horse. One of them, a one-toed close relative of the living species inhabiting southern Canada during the Ice Ages, turned out to have been galloping at around 34 kph (21 mph), which is quite fast for its small size (perhaps it was running from something). More significantly, however, the three-toed Miocene horse Scaphohippus was using a relatively unusual gait called the "rack" typically only seen in specialised domestic breeds today.

At the dawn of the Miocene, South America had been an island continent for many millions of years, allowing many strange forms of mammal to evolve that were not found elsewhere. Few of these survived the creation of the Central American land bridge, allowing more familiar creatures from the north to replace them. Some of those that did, such as the ground sloths, failed to make it through the Ice Ages, but there are exceptions still around today - descendants of ancient and peculiar animals that first originated in South America.

Among these are the armadillos, a group that was already well-established by the Early Miocene and with many living species, including one that has successfully colonised parts of North America. Miocene armadillos were perhaps more varied than those alive today, largely due to the existence of the glyptodonts.

Mouse Lemurs in the Mangroves 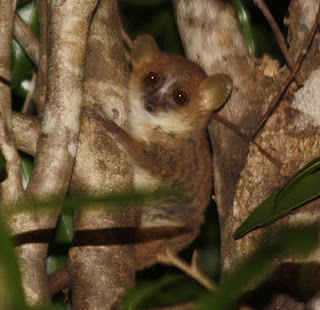 Well over 6,000 species of mammal have currently been described, many of which have only been confirmed as distinct species in the last few decades. There is undeniably a trend in the 21st century towards "splitting" of species along comparatively fine dividing lines, but it's also the case that this has been supported by advances in genetics and the like that have made it easier to tell when two groups of animals really are different, and not interbreeding.

But the corollary to this is that many of these species look extremely similar. It's often the case that, once a new species has been described on the basis of genetics, we can point to physical differences between it and whichever species we split it off from. But these are necessarily minor differences, perhaps previously thought sufficient to justify a designation as a subspecies, but more likely not noticed at all. Given the physical similarities, we'd expect that their diet, behaviour, and so on would also be similar - they are, after all, very close relatives.