Dolphin Snouts: The Long and the Short of It

On the whole, you would probably expect to find dolphins in the sea. This is, indeed, where the vast majority of them are, at least in the wild. But not all of them.

That's because there are also a small number of freshwater dolphins, living in particularly large river systems. Strictly speaking, though, only one of these, the Amazonian tucuxi, is really a dolphin, in the sense of belonging to the dolphin family. The others are slightly different sorts of animal.

There is, for example, a subspecies of finless porpoise that lives in the Yangtze River in China. You may, perhaps, recall that this river was also home to the baiji, a freshwater 'dolphin' that has recently been declared to be almost certainly extinct. (It is, incidentally, still waiting on formal confirmation of that fact, but it's hard to imagine that the outcome will be anything else).

The baiji, however, while related to the 'true' dolphins, was instead a slightly different kind of animal, one more adapted to a freshwater life. Apart from the baiji, there are also three more of these 'river dolphins', one of them living in the Amazon, alongside the tucuxi, one living in the Ganges and the Indus, and one that... um... doesn't live in rivers.

Caprines: Goats Among the Volcanoes

While most goat-like animals today are grazers, subsisting on relatively large quantities of low-quality forage, it's thought that their ancestors were originally browsing animals, defending small patches of high quality food in otherwise inhospitable and craggy terrain. In the west, the most familiar surviving "resource defenders" of this kind are the chamois of Europe. While the exact evolutionary relationships of chamois aren't entirely clear, they are part of a broad cluster of species that is otherwise crammed with grazing animals, such as "true" goats and sheep.

Not so their counterparts in Asia, which form their own distinct evolutionary line, one that never appears to have given rise to true grazing animals. It is these species, not the chamois, that probably most resemble the ancestral goats from which all others evolved.

Is a Platypus a Mammal? 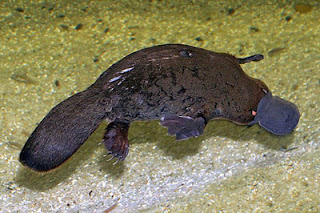 Oh, you wanted more than that? Well, let's see what I can do.

I've been asked this question a couple of times recently, and I was somewhat surprised on both occasions. Yet why should I be? When I conducted a very brief straw poll at work this week, I discovered that most people I spoke to weren't sure, with all but one of those saying "probably not". (I had one response of "definitely not, because they're marsupials", an answer that's wrong on so many levels I'll ignore it from here on in). Only one was confident of the correct answer.

It's all very well for me to say "what else could it be?" because, if I'm honest, I spend a lot of time on this blog pointing out that porpoises aren't dolphins, rabbits aren't rodents, musk deer aren't deer, and so on. If a porpoise can be its own kind of thing, without being a dolphin, then why can't a platypus also be its own kind of thing - albeit at a higher level of strangeness?

Giving Birth While You're Asleep 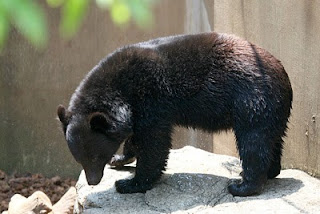 A number of mammals living in temperate environments hibernate during the winter, or when food is otherwise scarce. The great majority of them are small animals, such as rodents, which normally have a high metabolic rate, and need to eat constantly to fuel their bodies. While hibernating, their body temperatures drop to virtually that of their surroundings - effectively making them temporarily cold-blooded. They do, however, have to wake up from time to time, if only to relieve themselves, and possibly have a light snack.

Bears, on the other hand, cannot really be described as "small mammals". Yet most of them do seem to hibernate. That hibernation is, however, rather different to what, for example, hamsters, are doing. In fact, it's sufficiently different that it's been argued that bears don't really hibernate at all. To be honest, it's a matter of definitions, of what exactly you consider the word 'hibernate' to mean. Today, most zoologists seem to consider 'hibernation' to be a perfectly good word for what bears are up to, although it's certainly possible to come up with a stricter definition.