Dolphin Snouts: The Long and the Short of It

On the whole, you would probably expect to find dolphins in the sea. This is, indeed, where the vast majority of them are, at least in the wild. But not all of them.

That's because there are also a small number of freshwater dolphins, living in particularly large river systems. Strictly speaking, though, only one of these, the Amazonian tucuxi, is really a dolphin, in the sense of belonging to the dolphin family. The others are slightly different sorts of animal.

There is, for example, a subspecies of finless porpoise that lives in the Yangtze River in China. You may, perhaps, recall that this river was also home to the baiji, a freshwater 'dolphin' that has recently been declared to be almost certainly extinct. (It is, incidentally, still waiting on formal confirmation of that fact, but it's hard to imagine that the outcome will be anything else).

The baiji, however, while related to the 'true' dolphins, was instead a slightly different kind of animal, one more adapted to a freshwater life. Apart from the baiji, there are also three more of these 'river dolphins', one of them living in the Amazon, alongside the tucuxi, one living in the Ganges and the Indus, and one that... um... doesn't live in rivers.

Sometimes called the La Plata dolphin, but these days more commonly as the franciscana (Pontoporia blainvillei), this animal actually lives in brackish estuarine and shallow coastal waters off southern Brazil, Uruguary, and northern Argentina. It is, like all the other river dolphins, a fairly odd animal, one that's so peculiar that it is considered the only member of its family, and not closely related to anything else. (The closest relative it does have is probably the boto - the river dolphin living in the Amazon).

There are a number of things about the franciscana that make it appear odd. For one thing, it's unusually small for a 'dolphin', with even the very biggest males being less than six feet long. It also has an incredibly long snout, with a large number of small, pointed teeth - over a hundred in each jaw.

So where did this animal come from, if there are no other species in its family? As is so often the case, the answer is that while there may be no other close relatives alive today, there are a number of fossils. While there aren't exactly a huge number of these, either, there are enough to know that the family appears to have arisen some time during the Miocene epoch, and that its species once also lived along the west coast of South America, and even off the east coast of North America.

All of these fossils share the unusual features that today distinguish the franciscana from the various other kinds of dolphin. All, that is, except for one: Brachydelphis mazeasi. This animal lived about 7 million years ago, off the coasts of Peru and Chile. The reason it's so odd is that it, for a member of a group distinguished by having an unusually long snout, it has an extremely short one - almost like that of a porpoise.

So odd is this, that it has been questioned whether Brachydelphis is really a member of the franciscana family, or even a river dolphin at all. Over the last ten years or so, there has been a general movement back towards 'yes, it probably is', based on the sort of fine detail in the shape of the periotic and incus bones that I can't be bothered to describe. But even so, how does it relate to the rest of the family, and what is it doing with that short snout?

There might, just maybe, be another short-snouted fossil member of the family. But the fossils for this aren't in a great condition, and, moreover, the animal in question lived off the coasts of Belgium and the Netherlands, which is hardly where you'd expect them. So it may well be something else entirely. Now, however, we have some new fossils, in fairly good condition, that may shed some light on the matter. 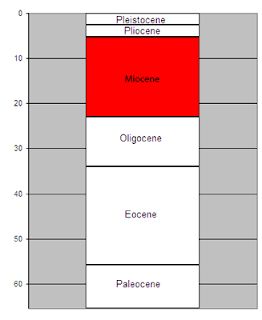 The two fossils are skulls, recovered from marine deposits near the coast of Peru, dating back about 9 million years. They belong to a small dolphin-like animal, slightly larger than the living franciscana, and have recently been described by Olivier Lambert and Christian de Muizon. What's interesting about them is that, judging by a number of features in the skull bones, they are very closely related to the mysterious short-snouted species. So much so, indeed, that they have been placed in the same genus, and named Brachydelphis jahuayensis. And, yet, they have a long snout.

This does help clear up the question of relationship; if this is a very close relative of B. mazeasi, and yet has the sort of snout you'd expect of a member of the franciscana family, it's much easier to see how the former could be related to the latter. But if they're that closely related, why is one of their more obvious features so different?

There is some reason to suppose that the known skulls of the short-snouted species belong to juveniles, based on such things as how well closed the bones in the skull are - they only tend to really fuse into a single structure in adults, something that's even more dramatically the case in humans, with our unusually large brains. Since the new fossils seem to be adults, we have a better idea of how many of the weird features of the short-snouted form are just due to it being younger.

For instance, not only does B. mazeasi have a short snout, it also has relatively few teeth - just 22 on each half of the upper jaw, compared with 34 in the new fossils. That may not sound very surprising, given that the jaw is, after all, shorter. But, actually no; dolphins don't tend to grow extra teeth as they age, even though the snout does generally get longer - the teeth just get further apart. Granted, they don't always have exactly the same number in every individual of a species, but 22 is quite a lot less, proportionally speaking, than 34.

With so few teeth, it's likely that the snout genuinely was short, even in fully grown adults. Why we can't be sure why this was, the researchers who described the fossils do offer a plausible explanation. They compare the two forms to living species with similar snouts, and numbers of teeth. While B. jahuayensis has far less teeth than the living franciscana it had about the same as, say, a bottlenose dolphin. The short-snouted species, meanwhile, is much closer to a porpoise.

The researchers suggest that the long-snouted form fed in the way that most dolphins, and, in particular, river dolphins, do today: they snap at fish, skewering them with their sharp teeth before swallowing them. Although the rule isn't hard and fast, cetaceans with shorter snouts tend to feed in a different way. Rather than snapping at fish, they suck them into their mouths, and swallow them whole. This is generally how the larger whales feed, and it t doesn't require so many teeth. Indeed, some of the best suction-feeders, such as the beluga, have very few teeth at all.

So, maybe, they suggest, the short-snouted form evolved to suck up prey, rather than grabbing it. And it's possible that the reason the longer-snouted form has fewer teeth than the living franciscana is because it evolved from a short-snouted species, and hadn't fully reversed the trend to get back to 'grasping' food capture. We can't be certain of this; we'd need a much better understanding of the structure of the mouth and throat than we have at present to confirm it.

But it's at least possible that we're seeing an evolutionary experiment here. And, moreover, seeing the outcome of that experiment failing in the longer term.