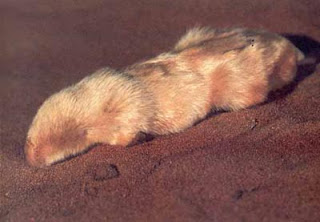 So, I finally reach the end of the mini-series on mole-like mammals. I've looked at the moles themselves, two different kinds of mole rat, and the golden moles of Africa, and that leaves just one group. But its perhaps both the strangest and the least studied of them all.

As you can see (sort of) from the picture, these animals look remarkably like the golden moles. There's probably a good reason for that; like most golden moles, they burrow their way through dry, sandy soils, and they have a very similar lifestyle. Yet, apart from both being mammals, they are entirely unrelated. These animals dig through the sands, not of Africa, but of Australia. For these are the marsupial moles (Notoryctes spp.)

The marsupial mole family contains just two species, imaginatively named the northern and southern marsupial moles. They're pretty much impossible to tell apart just by looking at them, and for a long time it wasn't clear that they were two separate species at all. They live only in the deserts of central and north-western Australia, where they like especially sandy soils, and feed primarily on ants and termites.

Should I Stay or Should I Go? 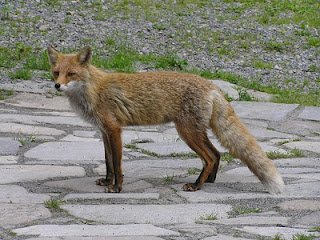 Although they are hardly alone in this, mammals are noted for their care of their offspring. Yet many of them are solitary animals, and the young leave home as soon as they are able to survive on their own, so that the only groups seen are when a mother is caring for her children. But, of course, many mammals live in herds, packs, or other groups, with at least some individuals staying with their parents once they grow up.

But, even in herds, some animals do leave home, to establish or join new groups elsewhere. How do they make this decision as to whether to leave or stay? For many, its a fairly simple rule: the males leave, and the females don't. That means that a herd or other group is dominated by a core of females descended from a single matriarch, while the males have generally come in from outside. Initially, in most cases, the males wander about looking for a new group, perhaps together with one or two other young males in a similar situation, until they eventually find someone that will take them in. This ensures that they don't end up mating with their own female relatives, and keeps the gene pool as wide as possible. 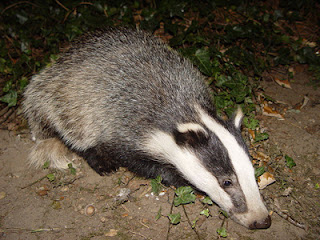 The European badger (Meles meles) is a very familiar animal across Europe, the animal we immediately think of when we think of "badgers". Its distinctive black-and-white face markings make it instantly recognisable, but, in fact, it has quite a range of different appearances, with variations in size, fur colour, and skeletal anatomy that allow it to be divided into a number of subspecies. This variation has been the source of some confusion when it comes to separating this species from its closest relatives.

It used to be thought that the European badger could be found throughout almost the whole of Europe and Asia, avoiding only the tropics, deserts, and the depths of Siberia. As a result it was called, quite reasonably, the "Eurasian badger". Over the last decade, that view has changed. Firstly, it became clear that the badgers of Europe and Asia were different enough to be considered separate species, and then that the badgers of Japan were likely different from those elsewhere in Asia. The suggestion has a venerable history; it was first made in the 1840s, but subsequently ignored when scientists decided that Eurasian badgers were really just one species that happened to be quite variable in appearance.

How Black Bears Trekked to Ontario

The Pleistocene is the geological epoch immediately before our own. It ended just ten thousand years ago, a time so recent on a geological timescale that the modern epoch isn't even visible on the chart of the Age of Mammals shown below - its effectively just the line at the very top of the column. It's hardly surprising therefore that, for the most part, the animals alive in the Pleistocene are the same ones that are alive now, barring those that have gone extinct over the course of human history.

The Pleistocene, however, represents the Ice Ages, when vast glaciers covered much of the landmass of the northern hemisphere (rather less so in the south, though, because Australia and Africa, in particular, don't get as close to the south pole as Europe, Asia, and North America do to the northern one). It ends with two events that occurred roughly at the same time: the warming of the world at the end of the last Ice Age, and the dawn of human agriculture. In the case of North America, humans only arrived at the very end of the Pleistocene, meaning that it represents the last time that the continent was untouched by human hands.

Swimming in Sand: the Golden Moles 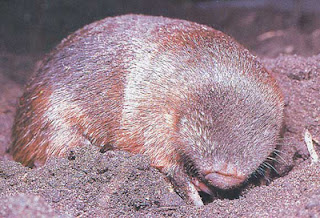 As we've seen with the moles and the two types of mole rat, spending one's entire life underground requires a number of unusual adaptations. However, because it has the great advantage of making you difficult for predators to find, it is a lifestyle that has evolved more than once among the mammals - and there are also subterranean reptiles, and even amphibians. The moles and mole rats are the best studied subterranean mammals, but they aren't the only ones. There are a lot of animals we could consider to fit this description, depending on exactly how broadly we want to define "subterranean", but I'll conclude this mini-series by looking at just two, which, like the moles and mole-rats, include particularly extreme adaptations.

The first are the golden moles. They inhabit southern Africa, often in much the same areas as the African mole rats, but the two types of animal don't seem to compete much. That's probably because, while the mole rats are herbivores, the golden moles are carnivores, feeding off various invertebrates, such as insects, earthworms, and spiders. That obviously makes them seem more like the true moles, but, in fact, the two groups are really not related at all.

Indeed, they are about as far from the true moles as its possible to be, while still being a placental mammal. Exactly what their closest relatives are has been debated, but they're probably the tenrecs, shrew-like animals now found only on Madagascar, and some rather odd African animals with a remarkable resemblance to otters.

There are at least twenty one species, most of which don't have particularly memorable names, but one of them was only discovered in 2000, so there's no particular reason to assume we've found all of them yet. The first genetic survey to figure out how the different species relate to one another was only conducted last year, and differs in a number of points from what we previously thought based on their appearances. This sort of thing isn't very surprising, especially when you consider that they all look pretty much the same anyway, so that we were relying on some fairly minor points of difference.

So what do they look like? As the name suggests, most species are golden in colour, and, of course, they all have the generally compact body form that truly underground animals all tend to. But, even ignoring the colour, they do look rather different from true moles. That's because they don't burrow in the same way. Moles have spade-like forefeet and very powerful arms, to shovel soil out of the way. Golden moles, however, have much narrower forefeet, that look more like picks than spades.

The forefoot generally has just two functional toes, each ending with a long claw, although those that burrow in sand have three or four. In addition to the claws, the animal uses its head like a wedge to force its way through the earth, something that probably helps in looser soil. But it also means that, even more so than moles or African mole rats, the animal's eyes are likely to get grit and dirt in them. So, like the blind mole rats, golden moles have tiny eyes - just 1% the size of the head - that are entirely covered in hairy skin, and likely to be useless for anything beyond merely detecting the presence of light. So far as I can tell, there has been no research on whether they can even do that much, although it would be a useful ability for an animal that is going to be much safer in the dark, so I'd guess it's quite likely.

Perhaps the strangest feature of the golden moles, however, are their ears. The malleus, or hammer bone, of the middle ear is, in many golden moles, truly enormous. Relative to their body size, some species have the largest mallei of any mammal - in extreme cases being somewhere between sixty and a hundred times heavier than you would expect. In most cases, they are heavier simply because they are bigger, with a huge spherical or elongated head, but in the desert golden mole (Eremitalpa granti), at least, the bone is also remarkably dense. All of this apparently helps them to detect vibrations in the ground, and even work out the direction they are coming from, so that they can run for cover in the very deepest parts of their tunnels.

Golden moles tend to dig relatively shallow tunnels, just beneath the surface. Indeed, in the case of the desert-dwelling species they are effectively swimming though loose sand, using their pick-like claws in a kind of butterfly stroke. The tunnels have to be shallow, because that's where all the tasty insects are, but they also dig much deeper passages for protection, and its then that they use their relatively normal-looking hindfeet to kick up molehills on the surface. In addition to those they use to hide from predators, such deep passages can also end in breeding chambers, or latrines, making it hard for other animals to scent their spoor or find their young.

They seem to breed whenever they feel like it, rather than having a defined breeding season, and to give birth to small litters of no more than about three pups. Like most subterranean animals, other than the African mole rats, they are solitary animals, leaving their mother's nest as soon as they can. At least some of them are adapted to survive at a wide range of temperatures, including the ability to lower their body temperature and hibernate, if it gets really cold - as it sometimes does, for example, in the Drakensberg Mountains.

Although the group as a whole is well-adapted to a range of different habitats, from sandy desert to sphagnum-covered swampland, many individual species have highly specialised requirements, and that puts them at risk from encroaching human activity. Five of the species are considered endangered, but two further species are known from only a single specimen each, which doesn't exactly bode well. Indeed, one of those, the Somali golden mole (Calcochloris tytonis) isn't even a complete specimen - scientists just found a bit of one in the pellet of a barn owl in 1964, and have never seen another since.

Leaving that aside, the most endangered species that we definitely do have information on is De Winton's golden mole (Cryptochloris wintoni), which inhabits coastal sand dunes in the Namaqualand strandveld of South Africa. Or at least, it did, because, despite having tried, nobody has seen one since the 1950s, and its habitat has been largely destroyed by diamond mines. Our lack of knowledge of golden mole genetics may mean there are more species than we have found so far, but our own activity may also mean that there are rather less.