The species of the dog family can, broadly speaking, be placed into three main subgroups: the wolf-like dogs (including, for example, coyotes), the true foxes (that is, those related to the red fox of the Northern Hemisphere), and the South American, or "false" foxes. However, there are a few species whose placement in the family tree is rather less certain. One of these is the grey fox of the eastern US, but there's another that's so peculiar it was once placed in a subfamily all of its own, as if it weren't really a fox at all.

The bat-eared fox (Otocyon megalotis) lives in eastern and southern Africa, although, interestingly, not in between. They can, for instance, be found in far northern Zambia and Malawi, and in far southern Mozambique, but that's as close as the two populations get. Which, to save you the trouble of getting out a map, is a gap of about 1,000 miles or so. Given their complete lack of contact with one another, it is perhaps unsurprising that the two populations are considered separate subspecies.

Modern genetic analysis has shown that bat-eared foxes probably are real foxes, albeit ones whose ancestors diverged from the line that led to all the other true foxes very early on. It has to be said, though, that that isn't 100% certain, and it's possible that the divergence was so early that they just go at the base of the tree, not closely related to anything.

The mole family includes over 40 species, found across the Northern Hemisphere. They are, of course, most noted for living underground, burrowing their way through the soil in search of worms and similar food. But, in fact, this is by no means true of all members of the family.

Indeed, we can divide the lifestyles of these animals into three broad categories. First, there are the truly fossorial moles, meaning those that spend virtually their entire lives underground. This is the case for about three quarters of the living species, including the familiar ones that so annoy gardeners. But there are also the semi-fossorial "shrew-moles", that do quite a lot of digging, but spend much of their life above ground, retreating to their burrows primarily to sleep, and perhaps to supplement their surface diet. And, finally, there are a few species in the family that are semi-aquatic, spending their time swimming in rivers, even if they, too, have burrows to rest in.

It's generally thought that it's the shrew-moles that most resemble the earliest prehistoric members of the family. That, in other words, while moles may always have dug holes, the specialised features that allow them to spend their whole lives below the soil took some time to evolve. Which is probably what you'd expect anyway, especially since the closest relatives of moles alive today are the shrews and hedgehogs.

Monkeys in the Snow 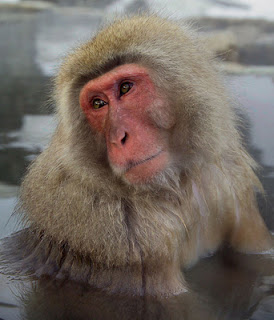 When we're considering how an animal interacts with its environment, and the other life around it, diet is understandably one of the most important features we look for. That isn't to say that there aren't other important factors, too - what eats the animal, when and where does it sleep, how fast does it breed, does it physically alter its environment, and so on. But what sorts of things the animal eats is fairly high on the list.

But that's not always as simple a question to answer as one might like. If the animal is an extreme specialist, then it's not such an issue - it eats whatever it eats and that's that. But most creatures have at least some variety in their diet, and, in practice, not all of them will be eating exactly the same mix of foods. In most parts of the world, for instance, diet will change with the seasons. In temperate environments, different foods are available throughout the year, with fruits and seeds, for example, being most available in the autumn, and insects being more readily available in summer than in winter. Even in the tropics, there are usually wet seasons and dry seasons, which affect both the plant life and the creatures that feed upon it, which, in turn, affects the carnivores.

Then there are animals that inhabit different habitats across their range. Here, diet can be affected simply by where you happen to live. In turn, what, and how much, food is available can affect other aspects of the animal's behaviour. For example, it may affect how they interact with others of their kind, how big an area they need to forage in if they are to keep themselves healthy, and such things as birth rates and mortality.

How Not to be Eaten

Animals, on the whole, want to avoid being eaten. There are a number of ways of achieving this, including being well armed or armoured, or just being too large for most predators to bother with. For relatively small and inoffensive animals, however, we're left with being difficult to find, and being good at escaping when you are detected.

But even this can cover a range of different strategies, or combinations of strategies, not least because there are a lot of different predators out there, and what may be good for escaping from one may be less effective against another. Moreover, if every animal evolved to avoid, say, the open grasslands in favour of forest cover, then there'd be an awful lot of potential food out there going begging. Inevitably, something would evolve to take that risk. There's always a pay-off involved.

It's as a result of things like this that there are so many species of small mammal, with subtle differences between them that are not always obvious to the casual observer. To understand the predator-prey dynamics of a particular habitat, we really need to look at a whole range of creatures. So many, perhaps, that it's beyond our ability to easily analyse in its entirety, but we can at least take a stab at a manageable group of species in one particular place, trying to see what makes them different, and why what works for some does not always work for another.