Bovids and Bovines - What Makes a Cow? 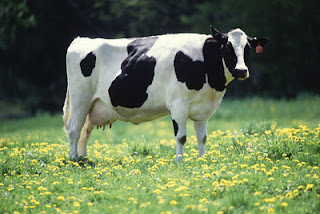 The cattle family, Bovidae, is the largest and most diverse of the various families of big herbivorous mammals, with only the deer family coming close to it in number of species. The majority of its members are antelopes of one kind or another, and it also includes goats and sheep, as well, of course, as the cattle themselves. Given the number of species within it, and the fact that a bison, say, has a number of obvious differences from a gazelle, there have been various attempts down the years to group its members into subfamilies or other smaller groupings.

However, opinions have differed as to quite how this should be done. How many significant sub-groups are there, which of them are deserving of the rank of "subfamily", and which animals go with which? Even with modern techniques for analysing genetics and coming up with computer-generated metrics of relatedness, the answers to these questions are not entirely clear. Partly that's because the first two questions at least are essentially arbitrary, and partly because we haven't really got enough samples from some of the more obscure species to really nail the family tree down. There could be anything up to sixteen subfamilies, or just two, or somewhere in between.

How Fossil Rodents Met Their Doom

A large part of palaeontology consists, as you might expect, of looking in detail at the fossils that are dug up. This can tell us a lot about the animal and how it lived. By analysing the shape of the teeth, we can get some clue as to what sort of things the animal ate, and from the shape and proportions of the limbs and other body parts we may be able to infer other details of the lifestyle. If it's a carnivore, for example, did it chase its prey, or pounce on it from hiding and overwhelm it with sheer physical force? If the former, it should have long, relatively slender limbs suitable for running, if the latter, we'd expect powerful limbs with attachments for strong muscles.

When it comes to fossil mammals, teeth are often the best guide. For one thing, being small, and made of material even harder than bone, they are more likely to be preserved, even if the entire rest of animal is missing. For another, for most mammals, the precise shape of the cheek teeth (molars and premolars) is highly distinctive, giving us clues as to how one particular species is related to others. Even if we did find, say, an isolated rib, it might be difficult to tell what it once belonged to, and it probably wouldn't tell you much about the animal in question even if you could - beyond, perhaps, some clue as to its size.

Mammals of a Tropical Island Chain

There are, at last count, well over 5,000 known species of mammal on the Earth. Many of these inhabit large regions, or particular patches within continents or large islands. Visit even one of the more desolate reaches of land on a major continent (unless it's Antarctica), and there will probably be quite a few species of mammal that live there - although, certainly, you'll find more in a tropical rainforest than the depths of the Sahara.

But smaller islands are a somewhat different matter. Islands tend to have less land-dwelling species than areas of equivalent size on the mainland, due to the difficulty of crossing the water to get there. Obviously, this is less true of things like dolphins or seals, for which almost any coast will do, should they bother to approach one at all, and it can also be affected by how long humans have lived on the island, and what animals of their own they have brought with them - intentionally or otherwise.

France, for example, has something like 90 species of wild land-dwelling mammal. Yet, nip across the English Channel, and Great Britain - ninth-largest island in the world - has only 52. And that's including things like grey squirrels, which do live wild, but are nonetheless a relatively recent human introduction. To be fair, there used to be more before hunters killed them and cities and farmland expanded to cover pretty much the whole of England, since we used, for example, to have wolves. And, yes, Britain is physically smaller than France, but even so, it's a noticeable difference.

A great many species of mammal exhibit some degree of sexual dimorphism, whereby one sex is larger than the other as a an adult. Usually, this is the male, something we see in our own species, where men are, on average, taller, heavier, and more muscular than women. In many animals, of course, the differences between males and females are more dramatic than they are in humans, as we can see, for instance, by comparing stags and does, or male and female seals.

The typical reason for this appears to be that larger males are better able to drive of rivals for their mates' affections, and are also able to demonstrate their fitness and ability to obtain food - and thus, hopefully, the quality of their genes - to those same mates. But it isn't always this way round, since there are a number of species where it is the female that is larger, perhaps since it makes it easier for them to care for and defend their young. (Indeed, outside of mammals and birds, this is by far the more common arrangement). Clearly, which influence wins out, and which sex ends up the larger, depends on the species concerned.

But is there some pattern to this, some rule of thumb we can use to predict which sex will be larger, and, if so, by how much? Working in the aftermath of World War II, German ornithologist Bernhard Rensch thought that there was. In 1950, he formally proposed what has since become known as Rensch's Rule. This states that, if the males are larger, sexual dimorphism will be most extreme in the largest species in any given group, whereas, if the females are larger, it will be most extreme in the smallest species.