This is, by my count, the 300th post to appear at Synapsida. Which means that, once again, it's time to look back over the last 100 posts to see what has, and has not, been covered, and where I might be going next. Which, considering that I pick the topic for over half my posts on the same day on which I write them, is likely to be a bit vague, but there you go.

The blog has been running for almost six years now, and has settled into a typical audience of between 200-300 hits per day (whatever the heck that means in terms of actual readers). The most frequently used tags over that period have been behaviour and evolution, although this may just reflect how I tag things. Biogeography, for instance, may well have cropped up in all sorts of posts that I didn't specifically note as such.

Looking back over the last 100 posts, carnivorans have probably been the most common animals covered, although there are also plenty of rodents, not to mention cetaceans, bats, primates, and all the rest. As I mentioned last time, my coverage of the main mammal families has been, if not entirely comprehensive, at least pretty broad. Since then, and ignoring posts on fossil beasts, I think I've added four more families to the list of those with a headline mention, all of them either small or obscure (or both): hyenas, degus, cheirogaleid lemurs, and echidnas.

But still no pigs.

The Sound of Squirrels 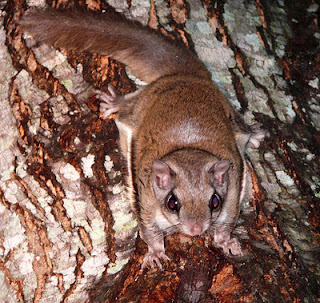 It is, of course, well known that bats and cetaceans use ultrasound to help them navigate the world using sonar. However, there is no particular reason why animals should always make sounds that happen to be in the range of human hearing (and, arguably, some good reasons why they might not want to). So, taking the usual definition of ultrasound as anything higher than 20kHz - the approximate upper limit for the hearing of a young, physically fit human - it shouldn't be too surprising that other mammals use ultrasound for purposes like communication. Or, in the case of shrews, for actual echolocation.

There has been significant laboratory research on the use of ultrasound by mice and rats since at least the 1970s, but it has also become clear that they are far from the only rodents to make sounds beyond our hearing range. Last year, I talked about the potential use of ultrasound for sexual seduction among hamsters (and, to be honest, didn't reach much of a conclusion) and we also know that, for example, baby voles call to their mothers ultrasonically if they become separated.

In the case of squirrels, though, we know rather less, and much of what we do know applies to various kinds of ground squirrel. As recently as 2013, however, it was discovered that flying squirrels also use ultrasound, presumably for social communication. Indeed, the sounds were quite complex and varied, not mere repetitive squeaks, implying that they might impart rather more information that one might think at first glance.

Over the last few months I have looked at the various species of cow-like bovine, including such creatures as yak, bison, and water buffalo. But we've known, since at least the 1950s, that there are also a number of other animals that are more closely related to cattle than they are to other kinds of bovid. Although the choice of terminology is ultimately arbitrary, these are commonly considered to be members of the subfamily Bovinae, and thus can also be described as "bovines".

They are not, however, physically very cow-like, and so are instead described by the more generic term "antelope" - which really just means "any bovid that's not obviously some kind of cow, sheep, or goat". The great majority of antelopes are therefore not "bovines" in any sense, belonging to their own distinct subfamilies. The majority of those that are are commonly referred to as spiral-horned antelopes. While all bovines are said to have some degree of spiral growth pattern to their horns, it's only in these antelopes that it's really obvious, with multiple turns of the spiral clearly visible to the observer.