The Red Queen and the Court Jester

What is the primary driving force behind evolution? If an animal is well suited to its environment, and able to reproduce effectively, then why does it change over time? Why, in short, don't humans still live up trees, where monkeys are still perfectly happy today?

There are two broad types of explanation for what drives evolution: they're called the Red Queen and the Court Jester. It's important to note that there's no reason why they can't both be responsible. Indeed, it would be astonishing if they weren't. The debate, then, hinges on which is more important, and when.

The Red Queen hypothesis, first formalised in the 1970s, is named for the character in Through the Looking Glass, who had to run as fast as she could, just to stay still. The idea is that no animal (or other living organism) is alone, and, if you don't evolve, the creatures around you will, and you'll be doomed. One species may be very good at eating a particular type of plant, for instance, but if another species gets slightly better at doing the same thing, if the first species doesn't improve, it will be out-competed and go extinct. You always have to be better than your competitors, and they have to try to be better than you, leading to a constant drive for change - towards better adaptation to your environment and chosen food source, whatever that may be. 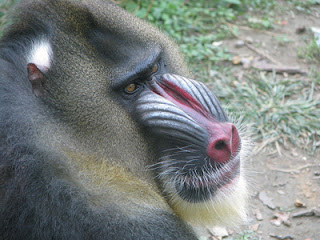 There are a number of colourful primates, but one of the more instantly recognisable is surely the mandrill (Mandrillus sphinx) whose adult males have strikingly blue and red faces. Under a strict definition, mandrills aren't really baboons, but they're very closely related to them, and the difference is pretty academic. Given that only the adult males have these extreme face-markings it's not surprising to learn that they are there mainly to advertise their masculinity and fitness as a potential father to female mandrills.

A study from 2005 confirmed that, yes, indeed, female mandrills find males with bright red noses to be particularly sexy. Oddly, though, until now nobody appears to have looked at what the bright blue patches on either side of the nose are for. In the new study, Julien Renoult and co-workers confirmed that the blue colour is more intense in dominant males, just as the red is. Indeed, it seems that what's really important is the contrast between the two. This suggests that, in the distant past, mandrills developed the red nose as a measure of their fitness, and the redder the nose, the more females liked them. So the noses of dominant males became ever redder... but there's only so red a nose can get. When some males began to develop a contrasting colour elsewhere on the snouts, the redness of their noses became more obvious, and, over the course of evolution, the bright blue/red contrast we see now developed.


The most successful body plan within the weasel family has been that for which it is best known: the small, slender, agile carnivore that feeds on prey too small for larger predators to bother with. In Europe and Canada, the best known such animals are probably common weasels and stoats, both remarkably widespread animals across the temperate regions of the northern hemisphere. But, of course, they are far from alone, just two among a total of fourteen currently recognised species of what, for lack of a better term, we can call "true weasels".

In North America, common (or "least") weasels and stoats are found in Canada and in the northwestern and northeastern corners of the US; they generally do not venture into warmer climes, as they do in many parts of Europe and Asia. That's because, in America, there is another species of weasel better adapted to those regions. This is the long-tailed weasel (Mustela frenata), and it, not the common weasel, is the one best known in most parts of the USA.

The Time of Horned Rodents

The rodents are the most successful order of mammals, with literally thousands of species worldwide. There are a number of reasons for this success, but one of them concerns the arrangement of the jaw muscles, which are modified to improve their ability to gnaw with their powerful, chisel-like teeth.

The muscle in question is the masseter, a muscle that, in humans, runs from the forward part of the cheekbone down to the back of the jaw, and which is important in chewing - it is often particularly large in herbivores, for example. It has two parts, one deep and one superficial, and in rodents, one or both of these parts extend much further forward than normal, reaching up onto the side of the snout. Generally speaking, in squirrel-like rodents, its the superficial part of the muscle that does this, in guinea pigs and their relatives, its the deep part, and in mouse-like rodents, it's both. Because the shape of the skull has to be modified to allow for these attachments, it is possible to tell which of the three possible arrangements even a fossil species had.

But there is one rodent species alive today that doesn't have any of these features. (Actually, mole rats don't have the full muscle arrangement, either, but we can tell from the shape of their skulls that their ancestors once did). That animal is the mountain beaver (Aplodontia rufa), and it's only found along the Pacific Coast of North America. Despite the name, it is not particularly closely related to real beavers, and it doesn't look much like them, either, looking more like some kind of giant vole. Indeed, its a burrowing animal that doesn't like water, and usually only ventures above ground at night.

The First Dolphin in the Amazon

In most of these posts, I tend to include a cladogram - a tree-like diagram showing how different animals are related to one another. But how do we know, and how are these things constructed?

Consider the dolphin family. We know that this is a true evolutionary group of animals - that is, it contains all of the descendants of some original common ancestor. We also have a pretty good idea of how it relates to other, similar, groups of animals, such as the porpoise family. But quite how the different types of dolphin are related to one another is less clear. I mentioned previously, when discussing the discovery of the burranan dolphin, just how confused we are about how bottlenose and spinner dolphins (among others) are related. But that is by no means the only unresolved issue in trying to sort out the dolphin family tree.

The tucuxi (Sotalia fluviatilis) is unique among members of the dolphin family in that it doesn't live in the sea. Instead, it lives only in freshwater, in the wide reaches of the Amazon River and its larger tributaries. It's not quite the only dolphin that habitually swims upriver, and, indeed, there are freshwater "dolphins" that aren't really members of the dolphin family at all, but it's the only "true" dolphin that avoids salt water altogether. Which makes it a pretty odd animal.