Perils of the Big Snooze 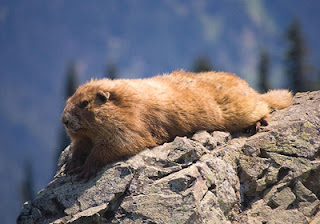 There are over 280 recognised species of squirrel, only a little over a half of which spend any significant time up trees; the others include an array of more or less ground-dwelling species, from chipmunks to susliks. They live in almost every terrestrial habitat imaginable, from tropical rainforest to semi-desert. One of the few habitats they don't live in is, unsurprisingly, polar ice cap, but, even then, there's one group of squirrels that at least gets sort of close.

These are the fifteen species of marmot (Marmota spp.), most of which inhabit mountainous regions, often above the tree line. Marmots are the largest of all squirrels, being at least twice the weight of, say, prairie dogs. However, the weight of marmots isn't necessarily the easiest thing to quantify, because it changes so much over the course of the year, which is in turn due to their need to bulk up before entering hibernation. And the reason for hibernation in marmots? Well, that brings us back to the crappy habitat.

Although there is, perhaps, more variety amongst seals than one might at first expect, when it comes to colouration, there isn't all that much to distinguish the different species. The majority are brown or grey, often with black or pale splotches of some kind. I've already described one exception, the harp seal, but arguably the most distinctive of all seal coat patterns belongs to its close relative, the ribbon seal (Histriophoca fasciata).

Male ribbon seals are black, or very dark brown, with clear, wide bands of pure white fur around their necks, shoulders, and just above the hips. Females are medium-brown with light tan stripes, so the pattern is less striking, but it's still present, and in the same shape. Neither sex is born like this; even once baby ribbon seals shed their pure white fur at around a month of age, they are initially plain in colour, only fully developing the stripes by the time they are two years old.

Over the last two and a half years, I have talked about a range of mammal species found across the Pliocene world. So far, I have only looked at the continents, and the various animals that lived on land. But the Pliocene seas were, of course, equally teeming with animal life. Much of this naturally consisted of either fish (most famously the giant "megalodon" shark) or invertebrates of various kinds. Sea turtles also existed, including some quite large ones, but, in keeping with the scope of this blog, I'm going  to focus on the mammals.

While we often tend to think that prehistoric animals tended to be larger than those alive today, this, was however, rather less true of whales, which have grown more or less steadily in size over the course of their evolution, perhaps in part to make it increasingly difficult for anything else to eat them. So, for example, the Pliocene killer whale (Orcinus citoniensis) was around 4 metres (12 feet) in length, barely more than half that of the modern species - although still quite impressive on a human scale. 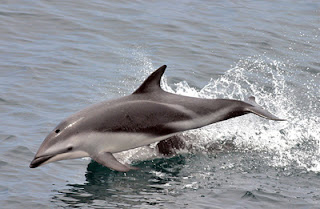 If you look at any really detailed description of the physical appearance of a mammal species, you will find a lot of intricate information on the shape of the teeth (especially the molars and premolars) and the dimensions of the skull. There will also be discussions of the shape and proportion of the limbs and the exact colour of the fur, as well as any horns or antlers it might have. And there's a high probability that there will be quite a lot of information about the shape of its penis and the size of its testicles.

Obviously, reproductive anatomy is an important field if we want to really understand how an animal functions and behaves. Testicular size, for example, can tell us about its mating strategies. This is because the rule is not simply "the bigger the animal, the bigger its gonads". In order to gather a harem of receptive females around itself, a male has not only attract them to itself with suitably impressive antlers (or whatever) it also has to fight off rivals, and it's going to have to be big and muscular to do that. But if the females are sexually promiscuous, that's pointless. Instead, what you really need is to produce so much sperm that yours swamps that of your rivals. So, in those species, the males tend to be smaller, but their testicles larger (proportionately speaking). Alternatively, if your species is monogamous then neither of these things are much of a concern.

So male reproductive anatomy can tell us quite a bit. But you won't typically find, in most descriptions, is quite so much information on the female reproductive tract. There's probably some information on the shape of the uterus, which can relate to things like litter size, and maybe for a few other features besides, but it tends to be rather less than you'll find for the males. 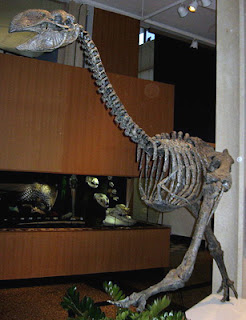