The Beardogs that Travelled the World

Dogs and bears are two quite distinct families of carnivoran mammal, and nobody today is likely to mistake one for the other. They both belong to the same half of the carnivoran family tree, separate from the one that gave rise to such creatures as cats and mongooses. However, their half of the tree also included such animals as weasels, seals, and raccoons, so it is quite diverse. Furthermore, within that branch, bears and dogs are not particularly closely related, last having shared a common ancestor something like 50 million years ago.

However, before we get back that far in evolutionary history we discover that, for much of the Age of Mammals, there was an additional family of animals belonging to the broad group that includes both bears and dogs, and which is no longer with us. These were the beardogs, more technically known as amphicyonids.

Beardogs were not, despite the name, the ancestors of bears and dogs. They were a separate family, one containing animals that looked a bit like bears and a bit like dogs, and which needed a common name of their own. "Beardogs" gets across both those physical features and the fact that they are, indeed, related to the two living families... having said which, it is not at all clear which, if either, of the two they are closer to, in part because the first of them appeared so early. 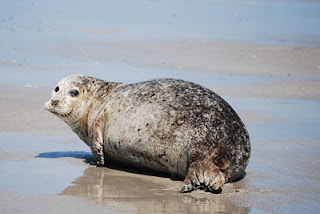 As I discussed just a few weeks ago, there are advantages to being able to identify your own children. It really does save the mother a lot of effort, especially when she can only look after a limited number of children at a time. As I pointed out then, mistakes do happen, and there are sometimes good reasons to look after other mothers' children, especially if the other mother happens to be your sister or something. But, generally speaking, getting the right child is a good idea.

Mother mammals can use three different methods to identify which child is their own, and likely often use a combination of them. Perhaps the most common method is smell, since most mammal species have a quite remarkable sense in this regard. If each child has a unique smell, or even if it just smells of you, that's a good way of identifying it. The other possibilities are identifying them by the sound of their voice, and, finally, by what they look like. For we primates, the latter may seem the most obvious, but facial recognition is something we're particularly good at. 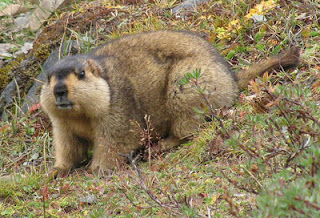 Rodents are, on the whole, small animals, with mice, voles, and squirrels being among the most familiar examples. Yet, even within those families, much larger animals also exist. In the mouse family, of course, there are the rats, some of which are, indeed, rodents of unusual size. The largest of the squirrels, on the other hand, are the marmots.

Marmots, of course, are ground squirrels, not the tree-dwelling sort, and their closest relatives include animals like prairie dogs, along with assorted other species across the Northern Hemisphere. They are, for the most part, mountain-dwelling species, with the groundhog of Canada and the eastern US being a well-known exception. Groundhogs, like other North American species, and, for that matter, the Alpine marmot of Europe, are a well studied species, about which we know a fair bit. The various species found across Asia - and there are at least six - are generally less well-known.

The Dog Family: Foxes of Asia

Asia is a large and varied continent, home to no less than seven species of fox, even using the most narrow of definitions for that term. Three of these, the red, Arctic, and Rüppell's foxes, are also widespread on other continents; the red foxes of Japan, for instance, belong to the same species as those found in Britain and North America. Of the four that are (mostly) confined to Asia, I have already covered the corsac fox of the central steppe lands, but three still remain.

Heading east from Europe the first such species we come to is Blanford's fox (Vulpes cana). This is named for William Thomas Blanford, who first described it as a unique species in 1877 while working for the Geological Survey of India. Blanford, who discovered the animal in what is now Pakistan, seems to have been somewhat surprised that he was first European naturalist to notice it. He may have had a point, since it's fairly distinctive.