The Dog Family: The Marks of Zorros

When North and South America collided towards the end of the Pliocene epoch a little over two million years ago, dogs were, for the first time, able to cross to the southern continent, a place that had previously been somewhat lacking in large mammalian carnivores. The dogs that crossed over all seem to have been related to wolves, rather than foxes. However, the fox body plan and lifestyle, with its high adaptability, proved so useful that most of the living descendants of these animals look just like foxes.

However, they are not "true" foxes, but rather, wolf-like animals that evolved into creatures that happened to closely resemble the members of the much older lineage that we find on the other continents (red foxes, Arctic foxes, the various kinds that we find in Africa, and so on). Recognising the distinction surprisingly early, some nineteenth century naturalists called them "fox-tailed wolves", and there has been a (largely unsuccessful) move to call the animals "zorros" in English, to distinguish them from the true foxes. That this didn't take off is perhaps due to the fact that "zorro" simply means "fox" in Spanish, and most of the researchers studying the animals are likely to be Spanish speakers... so it's not really a lot of help.

The beginning of the Pliocene epoch in North America was not marked by any great cataclysmic event, such as happened in Europe at that time. Nonetheless, while we're not far enough back that North America is unrecognisable, or in a different place, or anything like that, there would have been clear differences if we could see it from space.

Perhaps the most obvious difference would be that the Great Lakes didn't exist yet, since they were carved out by the advancing glaciers of the Ice Ages - which have yet to happen. With sea levels higher, Florida (then, as now, not a place known for its mountain ranges) is largely underwater, and there were probably many other changes around the coast, too.

Arguably the most important difference, however, is further south. Mexico is not so different, at least in its general outline, but beyond that things start to change. Depending on the exact point within the Pliocene we're talking about, you could perhaps have walked as far as Nicaragua without getting your feet wet. Beyond that, however, the Central American peninsula tapers to a point, and where Costa Rica and Panama should be, there is nothing but a chain of tropical islands, a southern counterpoint to the much larger chain of the Caribbean further north.

A Forest Fit for Sloths 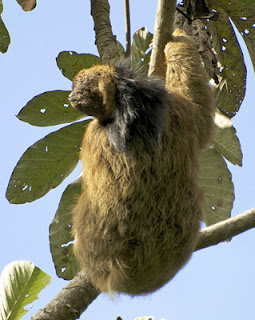 One of the main problems facing the continued survival of wild animal species across the world is loss of habitat. (Naturally, this goes for all kinds of animals, and plants, too, even if we're mainly interested in mammals here). As humans expand in numbers and push into the wilderness, we turn a lot of it into farmland to feed ourselves, use it for logging or mining, or simply build roads across it. The animals that are least concerned about this are those that we have domesticated, whether as pets or as livestock, with supremely adaptable generalists such as rats and pigeons following not far behind.

At the opposite extreme, of course, are the specialists, those that require one very specific sort of land to live in. In between there are a great spectrum of other animals, that can cope with some change, but not too much, that find orchards and plantations a reasonable substitute for forest, and so on. If we're interested in conserving particular animals, one of the first things we need to understand is just what their requirements are.

Even then, it's not enough to know that a particular animal "likes forests". What kind of forests? Do they really have to be primeval and untouched, or are there are at least some viable alternatives? Are there, perhaps, particular parts of the forest that they like more than others? In the grand scheme of things, just leaving stuff alone is probably the best answer from a conservation perspective, but, since human numbers aren't going to start falling any time soon, compromise is often inevitable. So the question then becomes: on what can we compromise?

A History of the Strange-Jointed Beasts 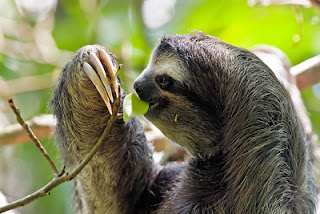 All living species of mammal fall into one of three major groups, representing the lowest branches of the mammalian family tree: the placental mammals, the marsupials, and the bizarre, egg-laying, monotremes. Well over 90% of identified living species fall into the first of those groups, which prompts the interesting question of how we divide those up - what, in short, are the next branches on the tree?

In the strict, old-style, system of classification, the next major level down is that of the "order", groups of broadly similar creatures that are in turn, divided into more than one hundred "families". Primates, for instance, are an order.

What the orders are, and how many of them there might be, has varied a little down the years, but nineteen or twenty would be a good, modern estimate. But, of course, the orders themselves are entirely arbitrary, and, even if they weren't, it isn't as if they all sprang simultaneously from the same stock. In evolutionary terms, there must have been some early branches in the placental family tree from which the "orders" that we know today descended.

The question of how to group the orders together into some higher level pattern is one that mammalogists have been been pondering for well over a hundred years. The problem is that the orders are pretty distinctive - is a moose more like a wolf than it is a monkey? When all you have to go in is physical anatomy, these are not the simplest questions to answer, and it's not surprising that people have come up with different answers.