Age of Mammals: The Pliocene (Pt 1) 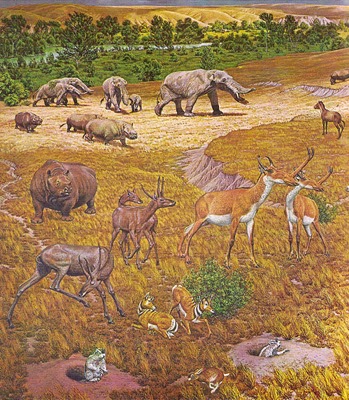 I suspect that when most members of the public think of prehistoric animals after the time of the dinosaurs, they think of the Pleistocene, the time of the Ice Ages. This was a time of bitter cold, the time of cave men, mammoths, and Smilodon cats. Even among scientists, it's easily the most researched of the various bygone epochs that make up the Age of Mammals, not least because it's the one closest in time to our own, and therefore the easiest to study.

But there are five other epochs that precede the Pleistocene within the Age of Mammals, and, compared with most of them, it isn't even very long. Heck, it isn't even 5% of the total. As it happens, though, the epoch that immediately preceded the Ice Ages, the Pliocene, isn't much longer. If we imagine, as we're often invited to, the entire history of the Earth as a single year, the Pliocene is, very roughly, the period between 2 and 7 p.m. on the evening of the 31st December. That's not exactly a large chunk.

On the other hand, on a human scale, the Pliocene is vast; the long autumn that leads from the summer of the Miocene into the freezing cold of the great ice sheets that follow. When I first discussed the Pleistocene, I used the example of a TV documentary that whizzes through the whole of history. In fact, it takes one minute to cover each decade of time. So the entire history of the world since the outbreak of World War I is covered in just the final ten minutes. Your life so far is, I can assume with some confidence, covered in even less time than that. 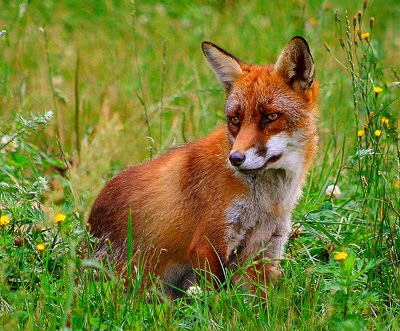 Herbivores eat plants, carnivores eat herbivores. That, at it's simplest, is how food chains work. But, of course, food chains are almost never that simple in reality. For a start, it's surely obvious that, given the chance, big carnivores eat small carnivores. They generally aren't a high proportion of their diet, not least because the sort of parasites you might find inside a small carnivore may not be very healthy for the big ones, either (mammalian carnivores being fairly closely related, in evolutionary terms). But they'll certainly do it.

Carnivores eating other carnivores is called intraguild predation, which sounds like it ought to have something to do with World of Warcraft, but doesn't. (Unless your characters eat one another, which I'm fairly sure the game doesn't allow). Inevitably, such predation means that the lifestyle of a small carnivore is somewhat different from that large one. It's not just being eaten themselves that they have to worry about, either. There's also the risk of something larger coming along and pinching the dinner that you just spent so much time catching. Which, while we're on the technical terms, is called kleptoparasitism.

Time of the Tiny Otters

A few months ago, the discovery of the "largest dinosaur ever" was announced. Again. Indeed, the "largest dinosaur ever" always seems to be being discovered, and, while we must at some point, surely get to the real end of the sequence, I wouldn't put any money on this latest one being it. But speaking more generally, I'd expect that when most people think of dinosaurs, "big" is going to be a fairly common adjective.

Even when we look at prehistoric mammals, it's the big ones that get most of the attention. Mammoths. Prehistoric rhinos. Enormous tank-like armadillos. Giant wombats. Big animals are cool, and there were some pretty large ones in the distant past.

Yet, at any point since their first appearance, small animals will always have been more common than large ones. Lots of small and interesting things doubtless scurried about under the feet of the dinosaurs, and so it was with the Age of Mammals, too. So today I want to look at the recently described fossil of a small mammal, and how it too, can tell us something interesting.

The Amazon rainforest is the region of dense tropical jungle that is drained by the Amazon River and its tributaries, and it is where the majority of marmosets and tamarins are found. In the northwest, it is bounded by the Andean mountain chain. Beyond this, on the northern side, there are more tropical forests, but these are much smaller than, and separate from, the Amazon proper. Once they would have stretched much of the way down to the Carribbean coast, interrupted only by patches of more open grassland and extensive swamps. Today, however, they form a belt of forested land, mostly in hilly terrain, that gives way to the more inhabited parts of Colombia, dominated at first by subsistence agriculture, and then by cities and areas of more intensive farming around the larger rivers.

The tamarins that live here, in the northern Colombian forests, must be descended from some group that crossed the Andes, presumably through some of the lower, shorter, passes near what is now the Venezuelan border, or else along the coast. There are three species here today, all apparently descended from that same original group, and including one of the first of any tamarin species to be formally described, back in 1758. This is the cotton-top tamarin (Saguinus oedipus), and it's at once one of the best known members of the marmoset family, and one of the most threatened.