As the year - and decade - approach their inevitable conclusion, it's time again to look back at a few palaeontological findings of 2019 that didn't, for whatever reason, make it into the regular Synapsida posts. As always, there is no theme to this list, just a sample of what seemed interesting linked only by when it happened to be published. 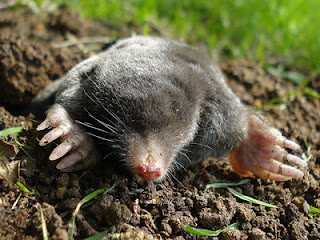 If hedgehogs are generally welcome in suburban gardens, there's one native British animal that generally isn't, and, like the hedgehog (and shrews) it belongs to a group of insect-eating mammals technically called the Euliptophyla. This, of course, is the European mole (Talpa europaea), sometimes called the "common mole" if we even need to distinguish it from other kinds of mole at all.

As the name implies, European moles are essentially unique to Europe. They are found throughout much of the continent, from northern Spain, Italy, and the central Balkans in the south to southern Sweden and Finland in the north. They are not found in southern Russia, but do reach just beyond the boundary with Asia in the northeast. While they are not native to Ireland, they are found on a number of smaller islands off the coasts of England, Scotland, and Denmark.

As North America dried out in the Late Miocene, and slowly transitioned towards the deserts and open grasslands that became dominant across the central parts of the continent, it wasn't just the herbivores that were forced to adapt. Carnivores may not have been affected so directly, but, if their food source was changing, they had to do so too.

There were two particularly significant changes among the North American mammalian carnivores that took place around this time. One was the extinction of the bear-dogs, a group with a long history on the continent that was, by this time, typified by relatively large animals that would have looked more like bears than dogs (although they were neither). Over in Europe and Asia, the bear-dogs survived for rather longer, although even there they struggled...  but in North America, the changes were too extreme for them to cope with, and they died out as the Late Miocene dawned.