At the dawn of the Miocene, 23 million years ago, North America was, in many respects, quite different from the way it is today. It was, at the time, separated from South America by a wide expanse of sea, and, perhaps more significantly, the Sierra Nevada and Cascade Mountain ranges, which today run from southern British Columbia down into Mexico, did not yet exist as any more than a series of particularly high hills. While the Rockies were already mountainous, so that there was at least some rain shadow, in general, the continent was wetter and more forested than today, lacking the great grassy prairies that are so dominant today.

As the climate warmed, sea levels rose, flooding low-lying coastal regions and turning major valleys into bays. For much of the epoch, for instance, Florida was almost entirely underwater. Further north, however, it was still connected to Asia (and Greenland, although that's less significant in the grand scheme of things). Perhaps because the land bridge was both far to the north and relatively mountainous, not many animals seem to have crossed it, but that changed in the Early Miocene as the climate began to improve, and only increased as the epoch wore on. And, for whatever reason, most of them were heading east - into America.

The Best Time for Breeding 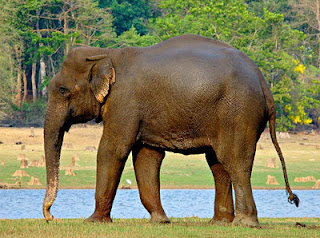 Animals, as a rule, want to give birth when their offspring have the best chance of survival. In particular, it's useful to give birth at a time when suitable food is most abundant, whether it's to allow the mother to produce enough milk, or to wean the growing young onto solids more quickly. If the animal in question is short-lived, the time of year may not matter too much, so long as the mother is well-fed and in good physical condition. If you have to breed multiple times each year, you'd better get on with it.

It may also not matter too much if the animal lives somewhere where the seasons don't change too much, although, even in the tropics, where there's no winter, there's usually a rainy and a dry season. A great many mammals, however, do have a specific breeding season, timed to be one gestation-length away from the best time to give birth. If pregnancy lasts six months, and the best time to give birth is in the spring, when fresh plants are sprouting, you'd better do your mating in the autumn. If pregnancy lasts twelve months, however, you want to mate in the spring. And so on.

With over 1,300 different species of bat known, it shouldn't really be surprising that there's a wide range of different dietary habits among them. Of course, a lot of that is on a fine scale, as I discussed just last month, but there are more significant differences in the kinds of things that bats feed upon. Insects, fruit, nectar, even blood all form the core diet of at least some kinds of bat.

One of the more unlikey food sources, however, is fish. Yet, when you think about it, fish is a really common food source for birds - there are a huge number of bird species that feed primarily on fish, including seagulls, kingfishers, and ospreys, among many others. Clearly, there's no inherent reason why a flying mammal couldn't eat fish, yet very few of them do.

As a recent review makes clear, however, "very few" is not "none".

Not the Pig Family: Peccaries of the World

The peccary family is, however, a lot smaller than the pig family: it contains just three living species.

The one that's likely most familiar to readers of this blog is also the most widespread: the collared peccary (Pecari tajacu). It's so-named because of the thin 'collar' of whitish hair that runs from its shoulders across the throat, although, in practice, this isn't always as visible as it might be. The animal is found through pretty much the whole of central and northern South America east of the Andes, through most of Central America, coastal (but not central) regions of Mexico, and into neighbouring parts of the USA, where it can be seen in Arizona, New Mexico, and Texas. If a distinction is needed, this is the true "javelina", since it's the one that's common where that alternative word for "peccary" is most commonly used.