The Pig Family: Peccaries Are Not Pigs 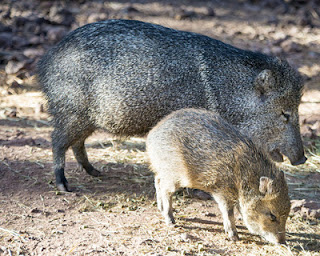 Over the the year so far, this series has described every living species of pig. Yet there are some animals that might seem to be missing. Found across much of Latin America, and up into the southwestern USA, we can find animals known as peccaries. These certainly look like pigs, and, unlike razorbacks, which can also be found in the US, they are genuinely wild animals, not the descendants of domesticated ones that happen to have escaped.

The reason I haven't mentioned them so far is, as the title of the post makes apparent, that they aren't actually pigs. So why the heck not, and what are they, if they're not pigs?

The strict answer to the first part of that question is that we've done the genetic and molecular testing, and we can tell that they're different from real pigs. In fact, so far as we can tell, they last shared a common ancestor with pigs somewhere around 40 million years ago (for comparison, the first apes appeared around 20 million years ago, so this is really quite a lot). But, as is so often the case, all this did was confirm what we'd already guessed, with the peccaries first having been formally separated from the pig family by Theodore Palmer way back in 1897.

Of course, we've known of the existence of peccaries for a good deal longer than that, and the word "peccary" itself comes from one of the native languages of the Caribbean. This, or variants of it, is the usual name for the animals in most languages today, at least formally. In Mexico, however, they also became known by the archaic Spanish word for "wild sow", javelina, and this name has also been adopted in the southwestern US.

However, when they were first given scientific names, back in the 18th century, peccaries were placed in the genus Sus, along with wild boar (and, at the time, warthogs and babirusa). Even when they were given their own genus, Tayassu, in 1814, they remained in the pig family. Palmer's move was to raise them to full family status, making them distinct from all other animals as the Tayassuidae. (It is, incidentally, unclear what the 'taya' prefix was originally supposed to mean; one theory is that 'tayassu' was a Native American name that only coincidentally shares a syllable with the Latin for 'pig').

At any rate, it's easy to see why this taxonomic separation took so long. Peccaries do, undeniably, look a lot like pigs.

Peccaries have stout bodies with short tails and relatively slender limbs. Their hair is bristly, albeit thicker than that in most pig species. The head is proportionately large, with mobile ears, small "piggy" eyes and a snout that, perhaps most significantly, ends in a flat cartilaginous disc around the nostrils. They are, on average, smaller than pigs, but no more so than many of the warty pigs of Indonesia and the Philippines, let alone the pygmy hog.

Like those of pigs, the "trotters" of peccaries consist of a cloven hoof, with two smaller toes behind it and further up. In some (but by no means all) pig species, these are sometimes used to assist in walking, especially in uneven ground, but in peccaries they appear to be entirely useless, remnants of their evolutionary past. A more significant difference, however, is that the hind feet of living peccary species have only one of these non-functional toes, not the two found on the front feet, and that are present on all four feet of pigs. Indeed, some peccaries don't even have that much, possessing just the two hoofed toes on the hind feet.

Like pigs, peccaries have an omnivorous diet, and this is reflected in a similar form to their teeth. The cheek teeth are somewhat simpler than those of pigs (especially warthogs, with their grassy diet), having a less complex pattern of ridges and cusps for grinding up tough plant matter, but they are broadly similar in shape. The incisors are also somewhat similar to those of pigs. Perhaps the key difference, though is in the canine teeth.

In pigs, these form tusks, with those in the upper jaw growing out sideways and curving back or upwards. This can be truly dramatic in warthogs and even more so in babirusas, but the pattern is visible in males of the other species too, such as wild boar.

The teeth of peccaries are far more sensible-looking. They do also have tusks, but these are simply enlarged and pointed canines, pointing in exactly the direction that you would expect any normal tooth to do, and not growing in some peculiar curve. This allows those in the upper jaw to interlock with, and hone against, those in the lower. This keeps them sharp, and means that they are effective for biting, not slashing. Although there are some other differences in the shape of the skull, this is the single most important distinction that allows us to tell pigs from peccaries, at least when all we have to go on is a fossil or skeleton.

However, if we have more than that, some other differences do become apparent. Peccaries are more likely to live in herds than pigs, although they have much smaller litters than any modern pig species, apart from the babirusas. They have fewer scent glands, although the ones they do have can be particularly pungent. Aside from the scent gland on the cheeks, which is shared with pigs (and many other animals), the only other such gland is a large one on the middle of the back, near the rump - a really odd place to have such a thing, and not seen in any other mammals.

Another significant difference is much harder to spot while the animal is still alive. Like pigs, but unlike most other cloven-footed animals, peccaries do not chew the cud. But, unlike pigs, they do not have the simple, single-chambered stomach that you would expect of a non-ruminant animal. Instead, the peccary stomach is more complex than that of a pig, with no less than three chambers.

There is no consistent terminology for describing how this arrangement actually works, since relatively little study has been performed on the matter. But, in general, what happens is that the oesophagus opens into a first chamber that has a mostly non-glandular lining (in technical terms, it's the same squamous epithelium that lines the oesophagus itself). From here, two wide openings lead into separate chambers - not quite as distinct as those in the four-chambered stomachs of animals like cows, but nonetheless clearly separated by deep folds in the stomach wall.

One of these additional chambers is a large, blind-ending sac, lying in front of the first chamber (that is, towards the head), while the second, behind and to one side of the first, includes the valve that leads on into the intestine. Both of these chambers have the normal mammalian glandular epithelium, producing stomach acid. Digestive enzymes, normally produced by the lining of the central, and largest part, of a mammalian stomach, are instead only produced in one half of the third, and final chamber (red in the diagram). This suggests that most actual digestion occurs here, with the other chambers serving mainly as storage organs, and perhaps helping to break food down into smaller particles, by churning it up and mixing it with acid, before passing it on further.

But, to the best of my knowledge, the full details remain a mystery, as is why the animal should actually need a complex stomach in the first place. Their diet, after all, isn't really all that different from that of pigs.

Anyway, because of all of these differences, zoologists do not consider peccaries to be pigs, even though the two groups are descended, if we go back far enough, from a single common ancestor. While such distinctions are ultimately arbitrary, peccaries are instead considered to constitute their own family of animals. It's not as a large a family, in terms of species, as the pig family is, but it's just as unique. Next time, I'll try and squeeze a description of every single living species of peccary into one post.

All three of them.

[Photo by Ed Ouimette, from Wikimedia Commons. Diagram by the author, based on that in Langer, 1977.]
Posted by JK Revell at 14:56