The Hunting Grounds of Small Cats 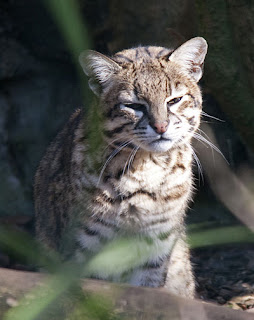 The big cats - lions, tigers, leopards, and so on - are arguably amongst the well-known of all wild animals. They frequently figure in zoos and nature documentaries, and, from the scientific perspective, they have been the subject of numerous studies down the years. Even the medium-sized cats, such as lynxes, bobcats, and ocelots, are well known, and, at least in the case of the European and North American species, also well-studied.

We know somewhat less about the assorted species of genuinely small cat - the ones that are about the size of the typical domestic moggy. Yet there are an awful lot of them, even if most members of the public would likely have a hard time naming more than one or two.

One such example is Geoffroy's cat (Leopardus geoffroyi) named for - though not discovered by - the pioneering French naturalist Étienne Geoffroy St Hilaire. This lives in southern South America, reaching Bolivia, Paraguay, and the southern tip of Brazil in the north, and also found just over the border in Chile, but mainly inhabiting Argentina and Uruguay. While they prefer terrain with scattered trees and plenty of bushes, the also live in open grassland, and are found right down to the very southern coast of South America, although not on the islands beyond.

It's probably fair to say that, being a cat, more is known about it than, say, any random species of tropical squirrel you could care to name. We know, for instance, a fair bit about its general habits, diet, and reproductive behaviour. It is, after all, reasonably common as small cats go, being the most common kind of wild cat across much of its range, and with hunting of it largely having ceased in the late '80s. One thing we really don't know much about, though, in common with almost every other small cat, is its social structure.

Now, as you may have noticed, cats aren't exactly the most cooperative of animals. Lions are an exception here, living in prides as they do, but the domestic cat is a far more typical representative of its family in this respect. In the wild, cats live and hunt alone, and, at least among big cats, tend to avoid one another outside of the mating season. However, the details do vary. Bobcats, for example, are willing to put up with close neighbours, so long as they are related (typically on their mother's side). Cougars, on the other hand, don't really seem to care whether or not their neighbours are related; provided there's enough food to go around, they'll share it with anyone.

Geoffroy's cats, however, are not particularly close evolutionary relatives of either bobcats or puma/cougar/mountain lions (they're closer to ocelots). Even if they were, they're physically different enough from either, that we wouldn't necessarily expect to see much commonality in their behaviour. Heck, lions and tigers are really close, and they behave completely differently, so why not smaller cats?

Some studies conducted in Argentina confirm the solitary nature of the cat, and have shown that each adult occupies an area of between two and twelve square kilometers (0.7 to 4.5 square miles), with males occupying larger areas than females. But a more detailed look at the movements of Geoffroy's cats was published earlier this year, giving us more insight into how they interact with one another.

This study was conducted in Uruguay, in an area of mostly open woodland mixed with agricultural land. It's worth pointing out, therefore, that the cats may behave differently in the more desolate parts of their range, such as Patagonia or the Andean foothills, where food supplies are presumably less readily available. By placing camera traps across the area, they were able to demonstrate that a region of about 30 km² (12 square miles) was home to at least 18 adult Geoffroy's cats, three of them with kittens. They were able to capture nine of the adults and fit them radio-collars to better track their movements, although two of these collars failed to gather data (in one case, because the cat was killed by a domestic dog a couple of days later).

In addition to the 18 residents, four males were spotted on the camera photos that seemed to be just passing through. This is typical for many mammals, with females staying near the place of their birth, while males wander off in search of mates to whom they are not closely related. This likely also explains why males tend to occupy larger territories than females, although the fact that they're physically larger - and so require more food - probably also plays into this.

But to what extent did they defend these territories from potential rivals? Not all mammals are territorial in this way, as I noted for cougars above. And, when they are, it's often the case that only the males are territorial, fighting one another to maintain exclusive access to as many females as possible. So long as they can feed their young, females have less need for such competition, so the pattern where they avoid each other, but the males don't would be an unusual one. And, of course, it's quite common for the territories of males to overlap with those of females, giving them a chance to meet.

In this case, however, neither sex avoided the other. In fact, somewhere around a third of each animal's home range - the area over which it regularly travels - was shared with the home range of another animal. Which might be either the same sex, or the opposite one. In some cases, even the core areas where the cats tended to sleep overlapped, if only a little. This was far more the case in wilder, wooded, terrain, than in farmland where the presence of humans and livestock may have reduced the opportunities for hunting and/or shelter.

All of this suggests that Geoffroy's cats, while living alone, are actually pretty tolerant of close neighbours. Analysis of blood samples taken from the cats fitted with the collars showed that there was a fair range of genetic variability among them. In other words, the local cat population was not inbred, which, taken together with the presence of the four travelling males, indicates that they had reasonable contact with the outside world and aren't isolated - something that would be important for their long-term survival.

On the other hand, how closely related the individual cats were to one another had nothing to do with whether or not they were willing to share territory. This is quite different than is the case with, say, ocelots, which tend to be wary of outsiders of the same sex. Here, however, the cats typically don't seem any more friendly towards their own relatives than they are to outsiders. The only exception were male cats, which more more inclined to share territory with a female raising one of their own half-brothers as a kitten; here, it seems, they were more willing to let her do so in peace, something that might be to the ultimate benefit of their genetic heritage.

It would seem though, that, in general, Geoffroy's cats are pretty easy going when it comes to sharing potential hunting grounds. If there's enough food for all, they won't even favour their own relatives over strangers. To an extent, everyone's welcome. They may be solitary, but they are, in a sense, not truly anti-social.

[Photo by Tony Hisgett, from Wikimedia Commons.]
Posted by JK Revell at 16:41