Warthogs are, quite possibly, the best known species of wild pig after the wild boar itself. They are relatively common animals, readily observed in the habitats where they live (rather than hiding in dense thickets, say) and, perhaps above all, they have a striking and distinctive appearance.

The common warthog (Phacochoerus africanus) is widespread across sub-Saharan Africa, and is currently thought to have four different subspecies. Unlike other African hogs, they inhabit lush grasslands and open savanna, country dotted with trees and waterways, but neither densely forested nor the truly arid terrain of veldt or desert. Two subspecies live in the north, in the Sahel belt that separates the Congo rainforest from the Sahara, and are found right from the Atlantic coast of Mauritania to the shores of the Red Sea in Eritrea. The others are found across East Africa and pretty much the entire south of the continent outside the deserts, reaching as far as South Africa.

They are fairly average-sized pigs, which is to say, slightly smaller than typical wild boar, and with longer legs. Their hair is fairly sparse, apart from a distinct mane down the back and, often, white tufts on the cheeks. Even by the standards of pigs, they have unusually large heads, and these are marked by the six warts that give them their name, two each on the muzzle, the side of the snout, and just under the eyes. These are much larger in males than in females, and the former also have larger tusks.

The tusks, in fact, are at least as noticeable as the warts, and far larger than those in more typical pig species. Both the upper and lower canines are enlarged, and project out of the mouth even when it is closed, but it is the upper pair that is the larger, typically reaching 30 cm (1 foot) in adult males, and spectacularly curving upwards and outwards.

Like other pigs, they will eat pretty much anything, although, perhaps unsurprisingly, they are quite picky eaters when they get the opportunity, deliberately focusing on the most nutritious foods. Much of their food consists of roots and tubers dug up from below the ground, but this isn't what the tusks are for, and, instead, they use their hooves and tough nose-discs to excavate the soil. With necks that have to be strong and inflexible to carry their large heads, their typical eating position is kneeling on their front legs to get down to the ground, and they commonly shuffle about in this pose.

Like most pigs, warthogs live in small social groups, with adult males staying apart from females and their young for most of the year. The bonds between females seem to be quite strong, however, and daughters may remain with their mothers for years. Although they are not particularly territorial, females at least tend not to move far from their place of birth, and both sexes mark sleeping sites and waterholes with scent from their facial glands, probably to advertise their sexual status and physical fitness.

They are among the more strongly diurnal of pigs, feeding during much of the day, but taking a snooze during the hottest hours. Interestingly, there is some evidence that, like cattle and deer, warthogs align themselves to magnetic north when they lie down for their afternoon nap. Quite why, or indeed how, they do this is unclear.

At night, however, they sleep in burrows, a relatively unusual habit for an animal the size of a warthog. Although they are capable of digging such burrows themselves if they really have to, they are much more likely to pinch the abandoned burrows of aardvarks (which are even more widespread across Africa than they are), and warthogs seem to be less common where aardvarks are absent. 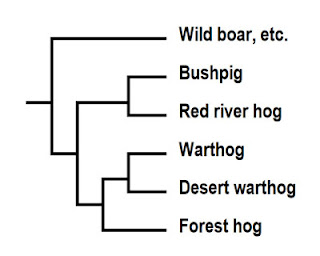 Warthogs are sexually promiscuous, in that both sexes tend to have multiple partners. Nonetheless, males do fight for access to females, and it's this that is the main purpose of those enlarged tusks. (Well, that and fending off hungry lions, hyenas, and crocodiles). Fights consist of pushing heads, locking tusks and taking side-swipes at the opponent, and this also explains the large size of at least some of the warts: while they probably also look sexy to the females, the warts below the eyes, in particular help, to ensure males don't blind each other when competing. Such fights are intended to drive weaker males away, and males may also stand around a female's burrow in the morning to catch her when she leaves. Unfortunately, for them, such tactics don't seem to be as effective as the males might like, probably because the females are too widespread to defend all of them at once.

At least in those parts of Africa that have distinct seasons, farrowing occurs around the start of the rainy season, after a five-month pregnancy. Around two or three piglets is typical, but females have eight teats, and do occasionally have litters up to this size. Mothers are often helped by their older daughters, sharing the work of raising and suckling the younger piglets, and this doubtless goes a long way to explaining why they remain more sociable than the males.

Warthogs were first described, way back in 1766, by Prussian zoologist Peter Simon Pallas, who used, as his basis, a specimen collected from the Cape region of South Africa. In 1788, however, Johann Gmelin identified what he believed to be, on the basis of some dental differences, a second species, which he described rather vaguely as living somewhere around Cape Verde. His description was widely accepted, and, for a long time, scientists thought that there were two species of warthog.

As zoologists began to tidy up the huge array of Victorian (and, in this case, Georgian) scientific names in the 20th century, it was decided that the differences between the two kinds of warthog were not list them as separate species, and they were merged into one. They remained as subspecies, but this was, to an extent, academic, since the sort that lived in the Cape Province had been extinct since at least the 1870s.

And then, at the turn of the 21st century, genetic analysis brought to light two surprising discoveries. Firstly, it turned out that Gmelin had been right: the sort of warthogs he had been looking at really were a different species from Pallas's original. In fact, they appeared to have diverged some time during the Pliocene, with a best guess of around 4.5 million years ago, which is hardly insignificant.

Secondly, the ones from Cape Province weren't extinct.

Because, it turned, that sort, the original named species, also lived in an entirely different part of Africa, way up around Somalia and Ethiopia. And there, they had survived, and didn't even seem to be endangered. This, of course, meant that the vast majority of living warthogs were actually a different species than we had thought they were. The upshot of this was that the 'common warthog' had to be given Gmelin's newly resurrected name, while the other one kept the original and became the desert warthog (Phacochoerus aethiopicus).

I mention this, in part, because it means that virtually any reference to 'P. aethiopicus' dating from the 20th century won't be referring to the species we now know by that name, but to the much more widespread 'common' species. (The current Wikipedia page on the animal seems to make this error repeatedly, as does the main secondary source it relies on). In fact, we know very little about the desert warthog at all, except insofar as we can generalise from its close relative.

We do, however, know where they live, and that they survive in a habitat that's much drier than that preferred by the common warthog. (There are also some areas where both live together, although so far as we know they can't interbreed). Nonetheless, they do require a fair amount of water to drink and to wallow in, so calling that habitat a 'desert' is a bit of a stretch. Arid grassland, perhaps, and with a strong tendency to cluster around the few water sources there are in such places.

Secondly, of course, we do know how to tell them apart, or we'd never have noticed they were different in the first place. To be fair, it's quite hard to do this simply by looking at them, which is why we ignored the 'desert' population for so long. They are said to be slightly smaller, although we don't have enough measurements to know for sure, or by how much, their ears are apparently a  different shape, the third pair of warts is somewhat hook-shaped rather than conical, and the tusks are a little bit smaller and straighter... but that's about it.

The skull does, however, have some much more obvious differences. Some of these are quite technical, but what originally caught Gmelin's eye was the incisor teeth. Common warthogs have a full set of three pairs of incisor in the lower jaw, and just one pair in the upper jaw - these are useful for clipping off seeds and stems from grasses and other low-lying plants. The desert warthog, however, has no incisors in the upper jaw at all, and the lower incisors are so tiny that they can't realistically be of any use, and don't even normally extend above the gums.

So desert warthogs must use their lips and gums alone to pull up plants. The teeth further back in the jaw suggest an abrasive diet, and these odd adaptations also imply that that diet is unusually specialised. Unfortunately, we don't really know what that diet is, although observations tell us that the general lifestyle of the animals seems similar to that of the 'common' species.

With their large heads and exaggerated warts and tusks, warthogs of either species are, arguably, quite bizarre looking animals. But, when it comes to odd-looking members of the pig family... you ain't seen nothing yet.

Synapsida will be taking a one-week break next week, and will return on 28th July.
Posted by JK Revell at 15:13