There is, it seems to me, quite a lot of confusion among the general public about the term "monkey", and exactly which species of animal it might cover. Some people refer to chimpanzees as monkeys, while others reserve it for animals with tails, such as macaques and spider monkeys. And what about baboons or gibbons? Come to that, aren't there other kinds of primate? Where do they fit in?

Or us? Are we monkeys? Are we descended from monkeys? Or neither?

In short, what precisely is a "monkey" in scientific terms? About three-and-a-half years ago, I blogged about the definition of "primate", so perhaps now I'll look at some broad types of primate, and how they fit together.

According to The Concise Oxford English Dictionary, whose job it is to know such things, a monkey is "a small to medium-sized primate, typically having a long tail and living in trees in tropical countries". This would seem to exclude baboons, because they don't live in trees, along with tailless creatures such as gibbons, chimps, and, obviously, our own species.

Merriam-Webster, on the other hand, goes with "a nonhuman primate mammal with the exception usually of the lemurs and tarsiers", a definition that clearly includes, say, chimps. It then goes on to add that the word is more commonly used of "any of the smaller longer-tailed... primates as contrasted with the apes", which is closer to the OED definition, and may, or may not, include baboons. (Smaller than what? Baboons, with tails, are much larger than gibbons, which are tailless).

But, neither, of course, is a scientific source, or a textbook on taxonomy. Up until about the 1990s, one could have got away with a scientific definition broadly along the lines of "any primate that isn't an ape, human, or prosimian", but that doesn't cut it today. Modern definitions of animal groups tend to be along the lines of "the last common ancestor of [two examples] and all of its descendants". This allows us to follow the rule that all the members of a given group must be more closely related to one another than they are to anything outside the group.

So, by rights, all we should have to do is to find two particularly distantly related monkey species, and use them as our examples. But, when we try to do this, we run into a problem. It's one that's quite common when we try to fit an everyday English word to a scientific grouping: there's more than one evolutionary line involved.

It's probably fair to say that most people would agree that #2 is pretty silly, which leaves us with the others. It may be more surprising to discover that scientists, at least when they're being technically precise, rather than speaking in everyday English, tend to go with #3. They do this by using another term - usually "simian", but sometimes "anthropoid" - to mean the "the group that includes both marmosets and macaques", and which will, as noted, also include apes.

But, if we don't want to get rid of the word "monkey" we're left with #1. Which, basically, means that we're just saying that "simian" and "monkey" are just alternative words for the same thing, and allows us to go on calling chimps "monkeys" if we really want to. They're both apes and monkeys, because, at the end of the day, apes are really just a special kind of monkey.

As, indeed, are humans. So, in a sense, humans aren't "descended from monkeys"; we either still are monkeys, or the word "monkey" has no scientific meaning and the statement makes no sense. Takes your pick. 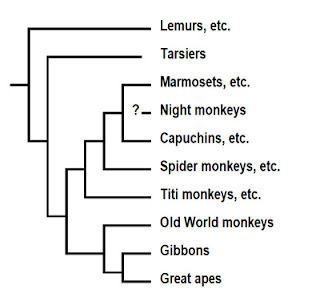 So much for pedantry; let's switch to a general overview of the kinds of primate that exist, and how they relate to one another. I am, for the purposes of this, going to ignore all the extinct species - of which there are, of course, a large number known, with many of them not fitting neatly into the families and other subdivisions within the group as it exists today. But let's try to keep this at least fairly simple.

The older term for this branch of the family tree was "prosimians", but that has a couple of unfortunate implications that mean it is no longer used in the technical literature. For one, the "pro-" half of the name implies they appeared before, or are at least more primitive than, the simians, whereas, of course, they've been around equally long, and have been continuing to evolve ever since. The second problem, which is perhaps more significant, is that it implies that all other primates are simians, which they aren't.

The technical term for these kind of primates is therefore "strepsirrhine", and they are typically  small, tree-dwelling, nocturnal, animals, distinguished by the fact that, unlike all other primates, they have the same sort of wet nose that (for example) dogs do. There are a great many species, arranged into as many as seven different families, the great majority of which only live on Madagascar and its neighbouring islands. Exceptions include the bushbabies of Africa, and the lorises, which are more widespread. The fact that these latter two do live alongside monkeys without going extinct does go some way to demonstrating that, as a whole, they aren't obviously inferior to the latter.

Back over on the other half of the primate family tree, it's probably only a few million years later that we get the next major split, wherein a group of small nocturnal animals called the tarsiers branch off. With their enormous eyes, elongated hind-feet, and carnivorous diet, these are weird enough not to be considered simians, although we do have strong enough evidence these days to confirm that they are not strepsirrhine, and are closer to monkeys than to lemurs.

So far as we can tell, they haven't changed much in all the millions of years since they first appeared, and so are in a sense, more 'primitive' than lemurs, despite being more closely related to our own species. (Mind you, for "primitive" one can also read "successful over the long term", since they aren't extinct).

All of the remaining species are simians - or "monkeys", if you prefer. Quite when the last common ancestor of marmosets and macaques lived is difficult to know for certain, but the best guess puts it at around 45 million years ago, during the Eocene epoch. It's at this point that the two evolutionary lines of monkey diverge, at least as far as our molecular dating tells us. Presumably, this happened in Africa, and its likely that the two kinds of monkey lived alongside one another on the continent for a while.

At some point, however, some of those monkeys became separated from their African kin, and ended up in South America. This is, frankly, a bit strange, given that, even this far back in time, the two continents were separated by the whole of the Atlantic Ocean. Which was narrower then than it is now, to be sure, but not that much narrower. While I could easily fill an entire post with what the heck we think happened here, it's enough for now to note that the oldest currently known South American fossil monkey dates back well over 30 million years, and looks a lot like the monkeys that  lived in Africa at the time.

Its closest relatives back in Africa, however, must have died out, and it's because of this that we have not one, but two monkey evolutionary lineages: one in the Americas, and one in the Old World. Today, we can distinguish the South American sort of monkey by a number of features that their most distant relatives all lack. Most notably, they tend to have flat noses, and their nostril are at the sides, rather than more central and underneath. They also have an extra pair of premolar teeth in each jaw, and many of them have prehensile tails - which Old World monkeys never do.

There are many kinds of monkey in Central and South America, and they are grouped into three to five families, depending on taste. They include the marmosets and tamarins, which I have previously covered in depth, along with the spider monkeys, howler monkeys, titi monkeys, and capuchins, among others.

Like most monkeys, they tend to be diurnal, probably because it's easier to jump from tree to tree in the daylight, but the group does include the nocturnal "night monkeys". Like all other monkeys, but unlike the great majority of nocturnal mammals (including lemurs), these don't have the reflective layer in their eyes that creates the "eyeshine" we're familiar with from cats, and that helps to compensate for low light levels. This implies that one of the key splits between the monkeys and the lemurs may have been the switch of the former to daytime living. Having lost the relevant adaptation, when night monkeys (and tarsiers, for that matter) switched back to nocturnal habits, they never had the chance to re-evolve it.

The monkeys back in Africa underwent a second major split about 30 million years ago, when some of them lost their tails and became the first apes. That this happened so long after the existing kinds of monkey split between the two continents is what creates the problem with nomenclature that I started with: monkeys, if we want to use that word at all, must have existed long before apes did, and the first apes evolved from them.

The remaining lineage of monkeys, the ones that still had their tails, was very successful, spreading across not just Africa, but southern Asia and Europe as well. The European ones didn't last - the wild monkeys of Gibraltar are a recent introduction - but there are still a great many in Asia. Unlike the sort in the New World, we group all of these into one huge family of "Old World monkeys" that includes the macaques, langurs, proboscis monkeys, and, yes, baboons, among many others.

Something like 20 million years ago, at the dawn of the Miocene, the apes split into the two families we have today. One of these includes the gibbons, or "lesser apes", while the other constitutes the great apes. Back in the day, this family used to be called the Pongidae, and was thought to contain just three living species: chimps, gorillas, and orang utans.

Today, we know that those three kinds of animal each include two or three species, but, moreover, we know that humans are more closely related to chimps and bonobos than we are to the other kinds of great ape. This means that we face exactly the same issue with the definition of "ape" that we do with "monkey": either humans are apes, or apes don't exist.

This time, we universally go with the first of those options, and the name of the great ape family is now Hominidae. Which means that the word "hominid", previously meaning an extinct relative of humans, now just means "great ape". Even gorillas and orang utans are hominids now.

P.S. That's a siamang, which is a member of the gibbon family, and therefore an ape. But, as noted above, if you said "monkey"... you're not necessarily wrong.