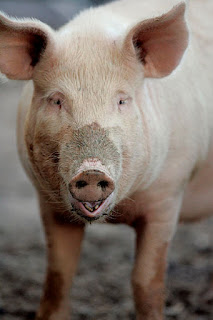 The pigs occupy an an interesting position in the mammalian family tree. The pig family, or Suidae, belongs to the order Artiodactyla, consisting of the cloven-footed mammals and a few of their closest relatives. (I will, at this point, note that I'm going to be using "artiodactyl" in the traditional, non-molecular sense, in this post. Paraphyly be damned, at least for today.)

This is unsurprising, given that pigs do, indeed, have cloven hooves. However, there are other features that almost all artiodactyls have in common, most significantly, that they are purely herbivorous animals with multi-chambered stomachs that they use to "chew the cud". Pigs, however, do not, and while they may not be the only non-ruminating artiodactyls, they are by far the most species-rich group to fit this description.

Traditionally, this was thought to be because they are more "primitive", having evolved before their relatives got round to developing more complex digestive systems. In a more modern way of looking at things, we'd instead note that, compared with other artiodactyls, pigs are omnivorous; they haven't developed more efficient ways of digesting tough plant matter because they don't need to. That they've survived as well as they have, evolving over many millions of years without ever being wiped out, shows that this has been a pretty successful tactic for them.

Pigs are distinctive animals, and one doesn't need to be an expert to identify them as such. (Yes, I know; peccaries - I'll get to them in a later post). They are relatively large mammals, without being truly huge, and have heavy bodies, short legs, a small tail, and a large head on a short neck. Their hair, when they have any, is bristly, and all pigs love rolling in the mud to keep it clear of biting parasites. Their ears are prominent and mobile, and their eyes small and "piggy". They have long, but broad, snouts, that, perhaps most obviously of all, terminate in a flat disk supported by an internal cartilaginous pad.

The purpose of this disk is to enable the pig to snuffle about in the undergrowth, rooting up potential food items. To aid in this, their snouts are unusually mobile, and, in fact, all living pigs have a special flange of bone projecting forwards from their cheekbones. This separates the jaw muscles from those that operate the snout, allowing them to move independently, and thus improving their snuffling ability.

As I've mentioned, pigs only have a single-chambered stomach, and they also lack the enlarged, plant-fermenting, caecum found in animals like horses. Their different diet is also reflected in the fact that their teeth are very different from those of ruminating mammals. Ruminants typically have a row of sharp, clipping, incisors, at the front of the mouth - often only in the lower jaw, so that they can use the toothless space above as a chopping board - and then a long gap between those and the cheek teeth. The latter are high-crowned, with a series of sharp ridges that make them ideal for chewing up tough vegetation.

Pigs, however, with their more generalised diet, lack this sort of specialisation. The actual details vary quite a bit between species, but they have incisors in both the upper and lower jaws, which are broader, and often more chisel-like, than in ruminants. The gap behind the front teeth is also much shorter, and the cheek teeth are typically more rounded, only possessing sharp ridges in a few species, and even then not to anything like the extent seen in ruminants.

Most significant, however, are the modifications to their canine teeth. These are unusually large, especially in males, with the upper canines forming distinctive tusks. These tusks project sideways from the jaw, growing upwards and backwards, allowing them to be used as weapons as well as for rooting up food from the ground. In most species, the canines in each jaw are honed against one another, keeping them sharp and possibly also preventing them from growing so large that they are unwieldy.

One of the features that pigs clearly do share with the other artiodactyls is the structure of their feet. Each foot has four toes, with the "thumb/big toe" being the one that's missing. As with all artiodactyls, it's the middle two remaining toes that bear most of the weight, but, in many pig species the outer two also help with walking; in others, they don't reach the ground.

There are other anatomical peculiarities of pigs as well. They have a large number of scent glands, typically on the face, feet, and groin, although the exact details vary. This, as one might expect, is correlated with a good sense of smell; they also have good hearing, but generally poor, and probably monochrome, vision.

Their reproductive systems are also unusual. Pretty well every other cloven-footed mammal gives birth either to singletons or (especially in goats) twins. Pigs, however, have quite sizeable litters, and can therefore breed more rapidly than their relatives. Furthermore, the male's penis has an S-like shape, and ends in a partially rotatable corkscrew. This, um... screws... into a similarly-shaped groove inside the sow's cervix, which not only means that the penis has to penetrate further than in most other mammals (it's usually not supposed to go beyond the vagina) but also that it gets locked in place for the duration.

Like most artiodactyls, pigs are sociable animals, although their herds are not as large as those of bison or wildebeest. They are also unusually intelligent, quite possibly the most intelligent mammals after primates, cetaceans, and elephants. This, along with a generalist diet, makes them very adaptable animals, and it's worth noting that pigs live in a wide range of different habitats, across a large chunk of Europe, Asia, and Africa.

I've been using the word "pig" here to refer, collectively, to all the members of the pig family, but it's perhaps worth noting that it's often used in a narrower sense, to refer either to the domestic animal specifically, or at least to its especially close relatives. When referring to the family as a whole, then, the technical term would be "suid". Although there were once others, all living suids belong to a single subfamily, and the term for those is "suines". This is, in turn, divided into a number of evolutionary lines, although a lack of molecular phylogenetic studies on the family means that the details of how exactly all the species are related is often unclear.

Other terminological confusion abounds. In medieval English, "hog" originally meant "castrated boar", but it now means either "adult pig", or "any especially pig-like suine that isn't actually a pig", depending on whether it's a farmer or a zoologist speaking. Although "swine" is, of course, also available, for simplicity's sake, I'm going to stick with "pig" as the generic term, even for things like, say, warthogs.

Defined in that way, there are seventeen generally recognised species of pig. It's not a huge number, perhaps, especially compared with the likes of, say, deer, although it might be more than some people would guess. Over the next year, I will be looking at those species in finer detail, and I'm going to start, as you might expect, with the one that's, for most of us, closest to home...

[Photo by Eva Rinaldi, from Wikimedia Commons.]
Posted by JK Revell at 13:57