Making Hay on a Mountaintop 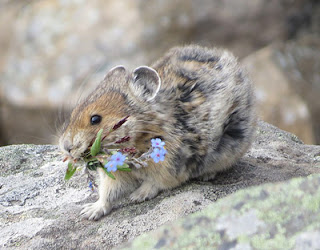 As I write this, the weather across much of the US is not great. According to Google, it is, right now, -12°C (10°F) in Washington, DC, and that's ignoring the effects of wind chill. And it's a nippy 16°C (61°F) in Arizona... okay, so perhaps that latter one isn't the best example. But the point is, this is harsh, and, if it isn't fun for humans, then it isn't for wild animals, either.

Indeed, winter in general is a tough time for animals living in temperate climes, as much due to the lack of food resources as to the need to shelter from the cold. There are a number of different strategies they use to mitigate this time of enforced starvation. Some animals, of course, simply brave the conditions, using thick winter coats, and perhaps some means of digging out food from beneath a blanket of snow. But others take more active steps, and there are basically three ways of doing this. One is to hibernate, so that you don't need much in the way of food until the spring. A second is to simply move elsewhere, either migrating to warmer climes or, if you live on a mountain, just heading downhill a bit.

A third approach is to collect food in the autumn and then store it somewhere through the winter, so that you have ready access to it. This, naturally, poses a number of problems. You have to remember where you put the food, hope that somebody else isn't going to find and eat it, and ensure that it doesn't spoil. Even so, a number of smaller mammals do exactly this, and it's clearly something that works for them.

There has been a fair amount of study into how remember where their caches are, how they distribute them, and so on, but rather less on the details of how and why they construct the caches in the way that they do. This isn't to say that there hasn't been any; for example, we know that beavers make strategic use of tree branches to prevent their caches from washing away.  But, in general, it's not a topic that has been looked at in quite so much detail.

Pikas are animals that resemble larger-than-average, short-tailed, voles. However, they are not rodents at all, but are instead related to rabbits - despite being smaller, and with short ears and no hopping ability, they are otherwise quite similar animals. Most species are found in eastern Europe and Asia, but there are two that live in North America. One lives in the far northwest, primarily in Alaska and Yukon, but the other is more widely spread across the western reaches of the continent, from British Colombia to New Mexico.

This is the American pika (Ochotona princeps), and, like most pikas, it lives in mountainous terrain above the treeline, so it is particularly affected by long or harsh winters. Unable to hibernate, and unwilling to head to lower terrain, American pikas dash about collecting as much food as they can during the summer, making as many as thirteen trips an hour, and storing it in impressively large piles, where it gradually turns into hay. While some individuals amass just a single hay pile, others prefer to have a number, in relatively close proximity. While it's unlikely that these piles are their only source of food through the winter, they certainly seem to be important, and the pikas not only visit them regularly but aggressively defend them from their neighbours. 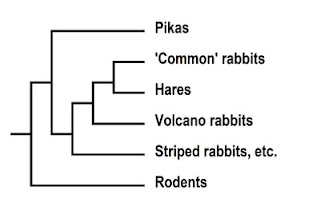 The piles are typically constructed over piles of rubble at the foot of cliffs, with their bases often falling deep into the crevices beneath, which presumably helps to keep them secure from pilfering. But do the pikas simply plonk down any old food in a big mass, or are they actually being a bit more sophisticated than that? A recently published study examined 62 hay piles constructed by American pikas in the Bridger-Teton National Forest of Wyoming to find out.

This is exactly the sort of mountainous terrain that American pikas like, ranging from 1,800 to 2,800 metres (5,900 to 9,200 feet) in altitude, with temperatures that can be subzero for over half the year, and having plenty of alpine meadows, even where it is below the treeline proper. As always, we can't say for sure that what pikas do here is exactly the same thing that they do everywhere else, but it's as good a starting point as any.

What the researchers discovered is that, while many hay piles are, indeed, just unstructured accumulations of plant material, over half of them are more complex. It would seem that, at least some of the time, the pikas build their piles in layers, with each layer containing a particular kind of food - mostly herbs (or, more accurately, forbs), but also including grasses and shrubs. Two or three layers were most common, but some piles had up to six. The question then is, why bother, and, if there is a good reason for it, why not do it all the time?

Since the pikas protect their hay piles, it's possible to determine which piles belong to which individuals. In this case, that allowed the researchers to rule out the relatively simple explanation that the animals got better at building piles with time; young animals were just as likely to build structured piles as older ones.

Another possibility is that the animals prefer to keep different kinds of food apart for some reason, and resort to constructing piles with layers only when all the food has to be stored in the same place - where there's room to do so, they construct lots of different piles, each with one kind of food. But, again, this appears not to be the case.

Nonetheless, piles with multiple layers did tend to be larger than those without them. It's not so much that smaller piles contain only one sort of stored food, but that they contain different kinds of food all mixed together; the pikas only separate the food types if the pile is large enough. And this suggests one possible reason: larger hay piles are more likely to fall apart due to high winds, sliding snow, or the like, so the pikas respond by giving them an internal structure that reinforces their strength.

Supporting this idea, it was common for at least one layer within the complex piles to consist primarily of woody or even thorny, material, some of which the animals didn't both to eat, even by the end of the winter. Instead, this type of tough, interlocking plant matter might help buttress the overall structure of the pile, holding the tastier, but leafier, material together.

While the idea of primitive architectural engineering may well be the main reason for this layering behaviour, the researchers also noticed that structured hay piles contained food that was, on average, more nutritious than that in the smaller, homogeneous piles. It could therefore be that, when the pikas find particularly tasty food, they like to put it all together in one specific part of their hay piles, making it easier for them to find again when they revisit the cache. This may be particularly significant, since high-quality food isn't exactly common where they happen to live.

Whichever of these reasons is the most important, or even if there's some other explanation we haven't thought of, it does show that there's more to constructing a pile of hay than simply dumping a load of grass and leaves on a suitably sheltered bit of slope. Pikas go to some effort to make sure that the food stores they will rely on through the winter are both reliable and useful.