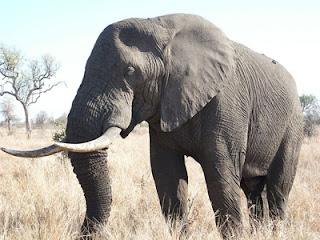 Compared with many other kinds of animal, mammals can often have complex social lives. While many kinds of mammal live in packs or herds, with sophisticated dominance hierarchies and the like, the most complex of all mammal societies (at least as defined by we humans) belong to species belonging to one of just three mammalian orders. It's likely no coincidence that these also happen to be the three orders with the proportionately largest brains.

Perhaps the most obvious of these are the primates, the group that includes our own species. Many species of monkey have flexible social structures where members join and leave groups, adjusting their social positions accordingly, and relying on sophisticated interactions with one another to keep everything functioning. However, the social lives of cetaceans (whales, dolphins, and porpoises) can be equally complex, with, for example, multi-level associations between different pods. The third group to exhibit this sort of behaviour are the elephants.

There are only three species of elephant alive in the world today, and by far the most studied of these is the African bush elephant (Loxodonta africana), likely because it's also the most numerous in the wild. In comparison, Asian elephants are more likely to be found in captivity and their wild populations are declining rapidly, qualifying them for formal "endangered species" status. The third species, the forest elephant, was only definitively established as a distinct species in 2010, meaning that we haven't yet had much time to look at it specifically.

Still, when it does come to bush elephants, we do know quite a lot about their social lives, primarily from studies conducted in national parks in Kenya. The basic unit of elephant family life is, as one might expect, that of a mother and her young children; in this respect, they aren't much different from most other mammals. However, as with other herd animals, daughters tend to hang around with their mothers long after they have been weaned, and this leads to the second-order structure of elephant "families", consisting of a group of associating adults - often close relatives - and their respective calves. These groups are led by an older matriarch, whose social memory and knowledge of the local area may help the group survive and prosper.

What's unusual is that we can identify no less than two social tiers higher than this family or herd unit. First is the "bond group", consisting of multiple families that often meet up, with the oldest matriarch present having some degree of dominance over the others. Finally, bond groups are themselves loosely organised into "clans" that associate less frequently, but still coordinate their movements over the landscape, and intermix from time to time.

"But wait," you might say, "what about the males?" And, yes, here, we are on a very different footing. Like most group-living mammals, the males leave their mother as soon as they are old enough, in the hope of meeting other females to whom they are not closely related. In the case of elephants, they do wait quite a long time before doing this, typically being somewhere around 14 years old, but from then on they are only occasionally associated with the matriarchal families, and then primarily for sex.

The females maintain their groups in part through auditory signals, being able to make a number of different calls that convey information about themselves as individuals, and their current emotional state. For this reason, among others, most studies on elepgant sociality and communication have tended to focus on the female family groups, not on the males. But, if the females have this level of vocal complexity, it would be surprising if the males lacked the same ability, even if they would have different motivations for using it. So what do we know about the social behaviour of adult male elephants?

It used to be thought that, aside from their brief forays into herds for mating purposes, adult male elephants mainly lived alone. But it's been clear since at least the 1970s, that, while they do, indeed, spend a lot of time alone, elephant bulls more commonly live in small groups, composed of around four individuals on average. While the female groups aren't entirely stable either, the all-male ones are much less so; bull elephants don't seem to form long-lasting friendships, and hang around with others on a short-term basis, coming and going as they please.

While they may not have any permanence in terms of their precise membership, however, these groups aren't entirely random. Most groups consist of individuals that are all around the same age, although younger bulls also prefer to hang about with at least one older male, who may help to provide them with the built-up experience that matriarchs provide for the more stable female groupings.

Another factor is that bull elephants are more likely to gather into groups when they are sexually inactive. Once a year, older elephant bulls enter a state of "musth" during which they compete with one another for females, becoming much more aggressive than they usually are. Understandably, this tends to break down whatever weak social bonds they have formed with individuals that are now their rivals. It's entirely possible that they remain close to one another the rest of the time at least partly so that they can assess how much of a threat those rivals are likely to be when the time comes; for example, given how violent sexual competition can sometimes get, they may wish to avoid entering a fight that they're likely to lose.

While young elephants are all more or less as vocal as one another, once they reach adulthood, the males do seem to communicate less than the females. When they do make sounds - typically low-pitched rumbles - they are mostly during the period of musth, when they are trying to attract mates, rather than when they're communicating with one another. (Females, it might be noted, not only have a special "chorus" call that they use to indicate interest in approaching males, but also a contented "post-copulatory call" that they use after the fact).

Indeed, it's only in the last couple of decades or so that researchers have taken a good look at the sounds bull elephants make at other times of the year. It turns out that many of these are associated with attempts to assert dominance over one another, but, while they may use them less frequently than females, bull elephants do make calls for more low-key social purposes as well. In fact, it is surprisingly recently that it was first shown that male calls, like those of females, are unique to the individual, and can provide a number of clues as to their age, physique, social status, and so on.

Given all of which, it may well be that the social lives of male elephants are more complex than we generally assume.