The First Dolphin in the Amazon

In most of these posts, I tend to include a cladogram - a tree-like diagram showing how different animals are related to one another. But how do we know, and how are these things constructed?

Consider the dolphin family. We know that this is a true evolutionary group of animals - that is, it contains all of the descendants of some original common ancestor. We also have a pretty good idea of how it relates to other, similar, groups of animals, such as the porpoise family. But quite how the different types of dolphin are related to one another is less clear. I mentioned previously, when discussing the discovery of the burranan dolphin, just how confused we are about how bottlenose and spinner dolphins (among others) are related. But that is by no means the only unresolved issue in trying to sort out the dolphin family tree.

The tucuxi (Sotalia fluviatilis) is unique among members of the dolphin family in that it doesn't live in the sea. Instead, it lives only in freshwater, in the wide reaches of the Amazon River and its larger tributaries. It's not quite the only dolphin that habitually swims upriver, and, indeed, there are freshwater "dolphins" that aren't really members of the dolphin family at all, but it's the only "true" dolphin that avoids salt water altogether. Which makes it a pretty odd animal.

We already know that it's closest relative is the Guyanan dolphin, sometimes called the costero, an animal that inhabits shallow coastal waters and brackish estuaries from Honduras to southern Brazil. Indeed, so similar are the two animals that, until 2005, they were thought to be the same thing - it was only when we worked that they weren't that we realised the tucuxi really does avoid salt water. Clearly, at some point, the common ancestor of these species split into two populations, one staying along the coast, and the other heading inland. But quite how that common ancestor was related to any other sort of dolphin was far less clear.

Not, it has to be said, for lack of trying to find out. There are at least two suggestions: either their closest relative is the rough-toothed dolphin (Steno bredanensis), or they're closest to the three species of humpback dolphin (Sousa spp.) That's partly due to disagreements on the best way of working this sort of thing out. It's generally agreed that using physical appearance alone can be misleading (although, in the case of fossils, you don't have much alternative), and that the best way of determining relatedness is to examine the DNA of the two animals. You may have heard, for example, that humans share around 99% of their DNA with chimps. That's probably an exaggeration, but, certainly we do share more of our DNA with chimps than with anything else, which is how we know they're our closest relatives. So do the same for dolphins, and we're sorted, right?

Well, not quite, because how best to compare DNA isn't always that clear. Which is why there's dispute as to whether 99% is, or is not, the best figure for chimps and humans in the first place. For instance, do we compare the entire genome, or do we get a clearer signal if we focus on just one part of it?

In any given animal cell, the vast majority of the DNA is contained within the cell nucleus. If the animal, like mammals, reproduces sexually, about half of that DNA will come from each parent. However, outside the nucleus are, among other things, tiny structures called mitochondria. Their function is to provide energy for the cell, but crucially, they also contain a tiny amount of DNA. Because of the way that sperm fertilise the egg, they contribute nothing to the offspring's mitochondria, and so mitochondrial DNA is inherited exclusively from the mother. As a result, it has often been argued that this gives a clearer idea of evolutionary relationships, enabling you to follow them down a single line. It probably also helps that there's a lot less of it, which makes it easier to analyse and interpret any differences you may find.

Indeed, the usual approach is to compare just one mitochondrial gene, cytochrome b, which has the advantage of being found in every living thing that's capable of breathing oxygen, while still having slight differences even between closely related species. However, that's not the only approach, and that brings us back to dolphins.

In a study published in December, Haydée Cunha of the Federal University of Rio de Janeiro, and colleagues, used the full set of mitochondrial genes to try and resolve the question of the tucuxi's origins. They took skin samples from tucuxis, Guyanan dolphins, and rough-toothed dolphins, extracted the mitochondrial DNA. They then compared the DNA sequences with each other, and with those of every other species of dolphin that has had similar analysis performed in the past.

That last part isn't necessarily as easy as it might sound. You need to compare thousands of different factors between a large number of different samples, to determine not just how much they differ, but in exactly which ways. That's beyond the capability of any human being, so the data has to be crunched in a computer, generating hundreds of possible evolutionary trees, determining which one fits the data best, and then coming up with a figure for likely that one is to be correct - its a complex process, involving quite a lot of maths.

In this case, the end result was a tree that showed at least three evolutionary lines within the dolphin family. One included the bottlenose dolphins, the spinner dolphin, and assorted relatives, while another included the tucuxi, the Guyanan dolphin and... the rough-toothed dolphin. The humpback dolphins, it seemed, were easily grouped in with the bottlenoses, and the results look pretty firm on that.

However, the computer struggled to make any sense of the relationships within the bottlenose group, and it had even greater trouble sorting out the third evolutionary line. This third group clearly included the pilot whales, among others, but there were some other species - including the killer whale - that there just wasn't a clear enough signal to place. They might belong to that line, but they might be separate. Being a computer program, it did it was told to and churned out a best guess, but the odds it gave of being right were little better than 50/50.

This is why debates still continue about how some groups of animals are related, and on the precise details of the evolutionary history. Some details may be clear, but even if we can agree on a one-size-fits-all method of comparing things (which we can't) sometimes there's just too many possible answers with an equal chance of being correct. As more data comes in, revisions get made, and a consensus generally evolves, but, at least in the case of the dolphin family, we aren't there yet. More research, as they say, is needed.

However, having produced their cladogram, the researchers' next step was to generate a chronogram. While a standard cladogram tells us how things are related, a chronogram goes one step further, and tries to figure out when their last common ancestor lived. In this case, for example, that might help us to figure out why the ancestors of the tucuxi chose to abandon the sea, a place that every other "true" dolphin has been perfectly happy in.

Again, computer programs are required. The theory runs that genes accumulate mutations at a more or less constant rate, at least within a group of closely related organisms. Count the mutations, and you can work out how old the evolutionary line is. However, that supposes you have at least some idea of what the rate might be, and to get that, you need to plug some ages into the software that you're fairly confident of. For instance, the oldest known fossil porpoise, Salumiphocaena stocktoni, is around 10 million years old, so the porpoises, as a group, must be older than that. On the other hand, the oldest known member of the group that includes both dolphins and porpoises are around 23 million years old, so that's the oldest the porpoises (or dolphins) are likely to be.

Do that sort of calculation for a number of different points on your evolutionary tree, to decrease the likelihood you're not missing something (because it might be that there's a really old porpoise we haven't found yet), and the software has something to work with. In this case, here's what it produced: 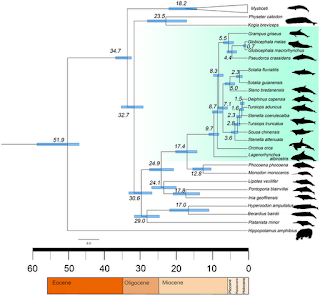 Click on the image to make it larger. The blue bars show the uncertainty in the answers - you'll note that some overlap, which is why it's difficult to figure out which order some events happened in. The greenish box represents the dolphin family; Tursiops are the bottlenose dolphins, Sousa, the humpbacked dolphins, Globicephala, the pilot whales, and so on (there's a full list here).

The chart shows that the tucuxi first evolved around 2.3 million years ago, heading inland away from the ancestors of the Guyanan dolphins. That's consistent with most, though not all, previous estimates, but there's another reason to suppose that it may be correct. That's because the Amazon River first flowed around 2.5 million years ago, due to a combination of the uplift of the Andes and a worldwide drop in sea levels as the first Ice Age loomed. Which means that the tucuxi may be as old as the river it swims in, heading upstream in the wake of local changes in both climate and geography.