The Wooing Ways of Ground Squirrels

Male animals will go a long way to ensure that they become the father for a female's young. If the female isn't likely to be monogamous, they may chase off rivals, beat them up, display their masculinity, or just have giant gonads. But male Columbian ground squirrels (Urocitellus columbianus), it seems, like to try a bit of smooching.

Columbian ground squirrels (that's British Columbia, by the way, not Colombia in South America) live in complex, underground burrows. They mate in the early spring, after waking up from hibernation, and the females are sexually fertile for just one day during each year, making competition between males particularly important. Yes, the males do fight one another to establish territories, but, according to a new discovery, that isn't their only trick.

In short, they don't go too far on a first date. They sneak into the female's burrows at night, when she isn't sexually fertile, and spend the night with her, without doing anything. The next morning - and the more experienced males do seem to be pretty good at predicting in advance the one day when this is going to happen - the females wakes up feeling randy... and, well, who's already there?

Admittedly, that isn't an end to the matter, since the females will be at it for up to another seven hours, with as many males as can get close to them, but being first makes all the difference. The males who successfully work out who they should be waking up with in the morning father the most children. Generally, that's the older ones; younger males are either more impatient, or just get little opportunity to kip in someone else's burrow, so, while they'll get their chance later in the day, by then, they've already missed their best chance.

Getting in Deep Water

When we see images of seals, they are usually lounging about on the coast. That's by and large because they're there to breed and raise their young, before they get old enough to fend for themselves. But, of course, seals spend most of their year out at sea where they're much harder to spot. Young seals, in particular, must face a challenging time when they first head out into deep waters. They have only just learned to survive away from land, and we might expect that, at first, they have to get used to the idea, and are less adventurous than their older relatives.

A recent study looked at the diving behaviour of southern elephant seals (Mirounga leonina) to see what differences there were between younger and older individuals. They tracked the seals off the coast of Argentina, where there is an exceptionally wide expanse of continental shelf. That means that the seas are relatively shallow, with plenty of plants for fish to eat, and therefore plenty of fish for the seals to eat. They were particularly interested in how much effort the seals put into diving, using light loggers attached to the animals to see how long they spent below the surface (a pressure gauge of some kind would have been better, but much more expensive).

The young animals (that is, less than three years old) turned out to be less willing to take long and deep dives and less willing to leave the shallower seas, compared with the older ones. Although its plausible that they weren't fit or experienced enough to make the really deep dives, we do know that they could travel into deeper waters if they felt like it, because some did - just not very often. Indeed, a few travelled thousands of kilometres out to sea, in some cases rounding the Cape Horn and heading out into the Pacific. That they didn't all take the easy option suggests that some were pushed out by their relatives and had to venture far afield. That most didn't may explain why this is a good area for elephant seal breeding - the adults may not care whether water is shallow or deep, but it's a big help for those that are still growing.

Columbian ground squirrels may be able to predict when females are going to come into heat, but, as we've seen before, male Assamese macaques aren't so lucky. Now a further study by the same researchers has looked into exactly when mating occurs in this species. In many mammals, there can be an advantage to synchronising ovarian cycles. The argument goes that, if all females are receptive at the same time, one male can't monopolise them all, and the female gets her choice of preferred partner.

Although there is some debate on the matter, it's generally thought that primates don't, as a rule, synchronise their ovarian cycles. That may be because, compared with other mammals, they tend to be fairly promiscuous, so that a small number of males monopolising all the females is inevitably quite difficult (monogamy, is of course, an alternative tactic). This new study showed that, as judged by hormone levels, female Assamese macaques were no exception - they do not synchronise their fertile cycles with other members of their troop. Which goes some way to explaining why the males can't figure out when they are.

However, it turns out, that while they may not synchronise their biological cycles, the female monkeys do synchronise their sexual activity - that is, they all tend to mate on the same days. Why so? We don't know, but the authors suggest that it may have a lot to do with the unusual mating habits of the Assamese macaques. Females, you may recall, tend to prefer particular males, and they don't really care if he's the dominant one, so long as he helps care for them and their offspring. The dominant males, though, being dominant, do want to mate with as many females as possible - but they can't do that if they're busy elsewhere. If so, this must be a behavioural tactic by the females, not just the result of their hormonal status, because we already know that they're just as likely to mate whether or not they are currently fertile.

There have been many studies looking at the hunting strategies of wolves, and how they travel long distances in search of prey, roaming over large expanses of the countryside, especially in the barren north. But, if you go far enough north, then, at certain times of the year, the sun never rises. We have, perhaps unsurprisingly, no studies on how the wolves of the far north behave during these weeks or months of perpetual darkness. Until now, that is. Researchers radio-tagged the leader of a wolf pack living on Ellesmere Island, to determine whether or not they behaved differently during four months of total darkness and temperatures down to -53°c. 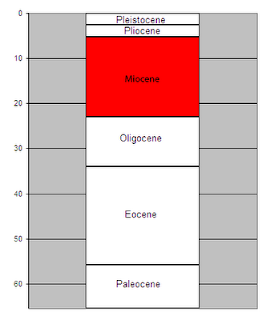 From the middle Miocene of Patagonia comes a report of a new species of rodent, Microcardiodon williensis. This is a relative of the guinea pig family, although slightly too primitive to belong to that family itself. The fossil consists only of half of the lower jaw, and is about 5 centimetres long. Even so, it is significant because one of the defining features of the guinea pig family concerns the shape of the jaw, and, especially, the teeth, and because the fossil comes from a time period when prehistoric guinea pig-like animals were just giving way to the first members of the modern family. This animal showed one of the three key features that distinguish true guinea pigs from those earlier fossil forms. We already have one, slightly later, fossil of an animal with two out of the three features - and plenty of earlier ones that have none - so this shows, not only a key point in the evolution of guinea pigs (and especially the adaptation of their teeth to the tougher plants that were becoming more common at that time), but shows that that evolution was a gradual, stepwise one, not a sudden burst as had previously appeared to be the case.


From just a tiny bit later, and from the same continent - although in this case, rather further north, in Bolivia - comes another jawbone. This one belongs to a sloth, Hiskatherium saintandrei, but quite how it relates to other sloths isn't clear. It is related, in some way, to the giant ground sloths, such as Megatherium, but this animal was much smaller, perhaps even smaller than sloths are today. Beyond that, all we can say is that it doesn't seem closely related to anything, although the jaws of sloths are sufficiently strange that that may be more of a limitation of our understanding than because this sloth is a genuine oddity. Interestingly, one thing we can say is that the animal apparently had an unusually long snout, and presumably a long tongue, perhaps for grabbing onto foliage.

A jawbone may not sound like much to form the basis of a description of a new animal, but our final fossil is just a single tooth. It is, apparently, the last upper premolar, and is about 5 millimetres across, so it didn't exactly belong to anything huge. It may not tell us much about the form of the animal that left it, but that doesn't mean it tells us nothing at all. For one thing, its similar, but not quite the same, as one we've seen before, so that we can say it belongs to a newly discovered species of the primitive omnivorous mammal Protungulatum. This, in turn, belongs to a group of animals that were amongst the most dominant of the Paleocene, the earliest epoch of the Age of Mammals, when they first spread across the globe in the wake of the devastation that wrought the death of the dinosaurs.

Except that this fossil is not from the Paleocene, but from the Cretaceous. It is, apparently, the first time we have found a fossil of such an animal that dates to before the K/T extinction, when dinosaurs still walked the earth. It certainly belongs to the line that led to the placental mammals, and was itself, most likely, an actual placental, although primitive enough that that's hard to know for certain. But, if it is, it may well be the oldest placental fossil ever discovered. Not a bad find, from one tooth.

[Picture from Wikimedia Commons]
Posted by JK Revell at 21:19