Cats were, like many other groups of modern mammal, relatively late arrivals to South America. When the continent merged with its northern counterpart, at least four kinds of cat were among the animals that headed south into virgin territory. Three were relatively large (jaguars, pumas, and the now-extinct sabretooths) but, in terms of the number of species surviving today, it was the smallest one that left the most descendants. Finding plenty of space, and few other animals already there that were at all similar, this early cat rapidly diversified into multiple different species.

This ancestral immigrant probably looked something like its best-known descendant, the ocelot. We can say this because most of its other descendants, such as the margay, also look quite a lot like ocelots. Compared with other cats - including those others on the same continent - they are all missing a pair of chromosomes, incorporating the relevant genes elsewhere on their genomes. That karyotypic quirk backs up the physical evidence of the cats' appearances to confirm their close evolutionary relationship.

The oncilla (Leopardus tigrinus) is among the smallest of these spotted cats, being similar in size to a domestic cat, but noticeably slimmer, and hence quite a bit lighter. In other respects, it looks like a miniature ocelot, albeit with proportionately larger ears and a shorter tail. It's known by multiple different names, even in English, with "tigrina" and "tiger-cat" probably being the most common.

But it's not just the common names; the scientific taxonomy of the oncilla has also been a matter of debate for at least a hundred years. It was first described by German naturalist Johann Schreber all the way back in 1775. A few 19th-century scientists identified what they thought were new species, but they had all been merged into one by the dawn of the 20th century. But the suggestion that there were multiple species never quite went away, popping up in 1919, and then again in the 1960s. As the 20th century drew to a close, genetic analysis was brought to bear to try to settle the question.

The results of a 1999 analysis showed that the oncillas living in southern Brazil were genetically very different from those living on the northern side of the Amazon. In fact, the estimate was that they had diverged around 3.7 million years ago, leaving them as genetically distinct from one another as some of the undoubtedly different species elsewhere were. The result was that we now consider the southern animal to be a distinct species in its own right (Leopardus guttulus)... quite what we should call it in English is unclear, but "southern tigrina" and "southern tiger-cat" seem to be the most popular options.

We may not be done yet; a 2016 study on a single individual captured in Costa Rica heavily hinted that it, too, might be a different species from the animals living in South America, although we'd need a rather bigger sample size to confirm it. But if we do, we can probably call the Central American animal the "oncilla" (its scientific name would, in fact, be Leopardus oncilla) and call the other two the northern and southern tigrinas. 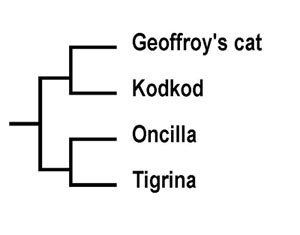 As the shifting demarcation lines imply, these two or three (or four) species are all extremely similar. Genetics aside, while there are some subtle differences, they can only be easily distinguished by where they happen to be found. The southern tigrina lives in southern Brazil and parts of Paraguay, while the other(s) live pretty much everywhere else in South America north of that and east of the Andes, plus that one small isolated population in Costa Rica to confuse matters.

They are woodland animals, and seem to inhabit a wide range of different forest types. The southern tigrina is particularly common in the Restinga, a type of subtropical broadleaf forest found along the Brazilian coast. The northern forms can be found in patches of deciduous forest and semi-arid scrubland, but seem to be most often reported from high altitude "cloud forests" up to 3 km above sea level. Both species will move into artificial plantations, and may sometimes approach human habitations.

Since they are nocturnal, live in dense woodland and, being small cats, are fairly stealthy animals anyway, it has been difficult to study them in any great detail, especially in the wild. Small rodents seem to form the bulk of their diet, although they also eat a fair amount of birds, reptiles, and so on. There is some evidence that they avoid larger cats (as well they might), switching to more daytime activity when such competitors are around, but that they may fare better in more marginal habitats, possibly because they don't need to eat as much.

Studies on captive animals show that they are happy to climb trees (although they mostly hunt on the ground in the wild), that single kittens are more common than twins, and that they quite like the smell of cinnamon, but not catnip.

Moving south, we come to Geoffroy's cat (Leopardus geoffroyi) one of a number of species named for Etienne Geoffroy St Hilaire, an early 19th-century zoologist and pre-Darwinian supporter of evolution. It's roughly the size of a domestic cat, and more heavily built than the oncilla/tigrina. They become noticeably larger, and their background fur shifts from golden to silver the further south they live, but the change is now thought too gradual to reflect any division into subspecies.

Geoffroy's cat is more of a habitat generalist than the oncilla/tigrina, able to adapt its behaviour to suit different environments even if they happen to close together geographically. In the north, it's more of a woodland animal but, further south, where forests are less common, or in the margins where tigrinas dominate the local woodland, dense prairie grass seems to be a perfectly acceptable alternative. This allows them to live throughout Argentina and Uruguay, and into southern Bolivia and western Paraguay, as well as the extreme southern tip of Brazil; they are often relatively numerous where they are found, and (despite some poaching) are not considered a threatened species.

Given this, it's probably fair to say that they adapt their diet to whatever is around. Nonetheless, the great bulk of their prey consists of various kinds of mouse-like rodent, supplemented by birds, reptiles, and, since they are skilled swimmers, fish. They will, however, also take relatively large animals, including such things as coypu and rabbits and hares introduced from Europe.

Like its close relatives, Geoffroy's cats are nocturnal, unless they're particularly hungry. They are known to be territorial, apparently staying in the same area for years at a time and using scent-marking to communicate with their fellows. They regularly defecate in trees; even in grassland where trees may not be common, they use them almost half of the time... which must at least tell other cats where to look for such signs.

They give birth to small litters, and, like other Leopardus cats, their kittens grow more slowly than those of the domestic species, taking longer to be weaned. Although it doesn't seem to be common, they are at least capable of breeding with tigrinas, since tigrina DNA has been found in some individuals near the southern Brazilian border where the two species come into contact.

Over on the other side of the Andes we come to the kodkod (Leopardus guigna), which lives only in central Chile and, to a small extent, just over the border into Argentina. A similar size to the oncilla, the kodkod is easily distinguished from it by the pattern of solid black spots, as well as a bushier tail and more rounded head. While Geoffroy's cats are sometimes also found with a solid all-black coat, like that of a "black panther", it's said to be more common in kodkods. This is due to a genetic mutation, one that has apparently occurred multiple times among these cats, rather than being carried over in the population from some common ancestor.

While "kodkod" is the name for the animal in one of the indigenous languages of Chile, a variant of the Spanish name for the animal, "guiña", seems to be becoming more common of late in English, despite the obvious difficulty of spelling it correctly if you don't have a Spanish keyboard.

The woodlands where kodkods live are too far south to be considered tropical or subtropical and are often dominated by beech trees. A significant population lives on Chiloé, a partially forested island roughly the size of Corsica or Puerta Rico. These show some genetic divergence from their mainland kin, suggesting that they may predate the island being cut off around 7,000 years ago.

Even ignoring those, in more recent times, other groups may have become cut off from one another by the fragmentation of forest landscape as agriculture expands. Kodkods prefer more heavily forested areas, but they do remain active along the forest edge and are therefore able to use narrow connecting strips of woodland - for example along coasts - to retain some sort of contact with one another. Even so, and considering that it's the most geographically restricted of the New World cats to start with, its overall range is contracting and is likely to do so further if climate change intensifies.

Part of the reason kodkods need forest so much is that they do a lot of their hunting in the trees, rather than on the ground. Despite this, their primary prey seems to be rodents, rather than birds, although there is an obvious bias towards tree-climbing rodents, of which there are a number locally. This may well be because the birds tend to be diurnal, and are presumably able to place their nests on branches too small to bear the nocturnal cat's weight.

With the possible exception of the adaptable Geoffroy's cat, all of the above species are, like the ocelot and margay, tied to forest environments of one sort or another. But the Leopardus group of South American cats also includes some species that actively prefer open space. It is to those that I will turn next time.