Pinnipeds: Killer Seals of the Antarctic

As one might expect, seals, for the most part eat fish and squid, although the precise details do vary quite a bit between different species, based on such things as their diving ability, as well as where they happen to live. Two species of seal in the Antarctic, however, do have a somewhat different diet, at least in part.

Leopard seals (Hydrurga leptonyx) are among the larger seals, with full-grown adults ranging from about 240 to 320 cm (8 to 10½ feet) in length. While this is still quite a bit smaller than elephant seals, the largest females - which are, unusually, larger than the males - can still weigh over half a tonne. They typically inhabit frozen waters far to the south, moving over the course of the year as the ice front expands and contracts with the changing seasons. Younger individuals seem to travel further north than full grown adults, and, while the winter range normally extends only as far as the various subantarctic islands, the Falklands, and Tierra del Fuego, they are occasional visitors to continental Chile, Tasmania, and some points even further north. A couple of reports from the middle of the last century, supported by actual skeletal remains, even refer to lone individuals getting as far north as the Cook Islands in Polynesia.

Leopard seals have sleek, grey bodies speckled with black, and relatively narrow heads by the standards of seals. Perhaps more distinctively, they have powerful jaws and large, stabbing canine teeth that reflect a diet including rather larger prey than other seals are willing to tackle. The exact details of that diet vary, and can, depending on the local circumstances, include quite a lot of fish and squid, just like that of other seals. They also eat a surprising amount of krill, which they suck into their mouths and filter through their cheek teeth, each of which have three points somewhat similar to those of crabeater seals (see below).

But what leopard seals are famed for, and what they need those large canine teeth for, is consuming large, warm-blooded prey; even their gut is modified to deal with a less fish-based diet than usual for seals. Indeed, leopard seals are top predators, perhaps the second-deadliest hunters in the Antarctic, after killer whales. While those travelling north in winter have occasionally fallen prey to sharks, for the most part, they're the top of the food chain, with little to fear, especially once they reach adulthood. They can be ferocious predators, and have been known, on very rare occasions, to attack, and even kill, humans.

Exactly what animals they hunt does depend on where they happen to be, as well as what time of year it is. In many places, for example, the bulk of their prey consists of small penguins, such as the Adelie, Gentoo, and macaroni species. Their usual tactic is to patrol the edges of the ice, whether it be solid sheets around islands, or the gaps between free-floating ice floes, and ambush the penguins by leaping from the water, grabbing them in their jaws and dragging them under to drown or die from massive blood loss. However, on occasion they do make ambush attacks from underneath thin ice sheets, or attack penguins swimming out at sea. 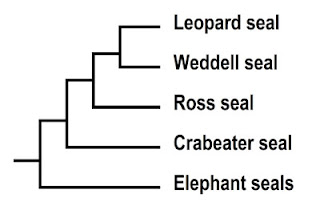 It's interesting to note that individual leopard seals seem to prefer different hunting tactics to catch penguins, and that, even where penguins are common, some prefer to focus on eating other seals. In other places, however, seal pups of other species are simply more common than penguins, and can form the major part of leopard seals' diets. The favoured prey here are typically either crabeater seals or Antarctic fur seals (which are members of the sea lion family), although anything local will do, even including young elephant seals - where the mother is likely to be around the same size as the leopard seal is, and presumably able to do some serious damage if she's suitably enraged.

Fully grown leopard seals don't seem to travel about all that much, sticking to a relatively small area of ice front or coastline, and, even compared with other seals, they don't come ashore much outside of the breeding season, quite often sleeping at sea with their head held above the waves. Because so much of their prey is on the surface, they are not as good at diving as other seals are, typically making short and shallow dives when they're in the mood for krill or fish, rather than air-breathing prey. Having said which, while most dives are to no more than 50 metres (160 feet), they can dive to over 300 metres (1,000 feet), and perhaps are more likely to do so in the winter, when krill tend not to be found near the surface.

While leopard seals are undeniably widespread in far southern waters, they are never particularly common, and tend to avoid one another for most of the year. This, combined with the harshness of their chosen habitat, means that we have rather less behavioural information on them than we might. They give birth on the ice around December and January, to pups that lack the usual fluffy white coat of ice-breeding seals. By around four weeks later, the pups are old enough to fend for themselves, and their mothers are mating in the water.

Males searching for mates at this time of year make a number of calls, which are variable between individuals, likely signalling information on their size, fitness, and so on. Surprisingly, sub-adult males seem to have even more complex and varied calls, although it's unclear what social information they might need to convey, since they tend to keep apart. It could be that they get better with practice, learning how to "do it right" from older males, although there is not enough clear evidence of this to know for certain.

With a total population of somewhere around 8 million, the crabeater seal (Lobodon carcinophaga) is not only the most abundant of all seal species, but one of the most abundant of any species of large mammal. They are moderately sized for Antarctic seals (and therefore larger than is typical for the Northern Hemisphere), and, like leopard seals, have relatively slender bodies. Their fur can be anything from dark grey to tan, and typically changes over the course of a year. Also like leopard seals, they follow the edge of the Antarctic ice sheets as they move with the seasons, and are found right around the frozen continent.

The diet of crabeater seals is even more specialised than that of leopard seals, with around 95% of all the food they eat consisting of... um... krill. Because, no they don't eat crabs. At all, ever, so far as we can tell. Nonetheless, we have been stuck with the name since at least the 1830s, even before it was immortalised in Latin ("carcinophaga" literally means "crab eater").

Crabeater seals feed bys sucking in water, and then straining it out again through their teeth, which catch any small crustaceans that it might contain. To aid them in this, the hind teeth of a crabeater seal have a highly distinctive shape, with up to five curving spikes that lock together with those in the other jaw to create the sieve. (This, incidentally, is pretty much the opposite for what you'd want to eat crabs, where something wide and heavy to crack the shells would seem more appropriate). One of the effects of this unusually narrow diet is that their dung is bright red, and it can colour the ice around them when they stay out of the water for extended periods.

For the most part, relatively shallow dives are all that is needed to find sufficient krill, and crabeater seals typically only dive to around 50 metres or so, and mostly at night, so that they can spend the day resting on the ice. They are, however, capable of diving much deeper, and have been recorded reaching twice as far down as leopard seals have. Like most seals, they are typically solitary outside of the breeding season, although there may happen to be several of them resting along the same stretch of ice, even if they're mostly trying to ignore one another while doing so. Nonetheless, there are a few reports of them gathering together in large groups to feed, apparently using cooperative tactics to gather the krill up.

Between September and November, expectant mothers haul out onto stable ice sheets over shallow seas to give birth. Unusually, a male usually accompanies her, hanging about as she rears her pup, so that he can in place just as soon as she comes into heat, just four days after weaning is completed. Having said this, the seals are certainly not monogamous, since not only do the two part ways as soon as the female heads back to the water after mating, but, if it's early enough in the season, the male may well stay behind to try and find another partner before time runs out.

The young are born with white fluffy fur that helps camouflage them against predators such as leopard seals, but this has gone by the time they are weaned, typically at just two or three weeks old. During this time they have been estimated to drink around 90 litres (190 pints) of milk, at the expense, naturally enough, of the mother's body weight. While all this is going on, males communicate with one another whenever they have to swim beneath the ice for food. This is mostly by means of a low-pitched moan, but they can make a range of other noises, too; it's not known how, or even if, they do anything like this outside of the breeding season.

Recent estimates show that crabeater seals don't reach sexual maturity until they're about six years old, but studies in the mid twentiteth century gave gave figures of around just four years. While the exact figures may be somewhat different, and reflect differing methods of estimation, this does seem to be a genuine pattern, perhaps due to the the effects of climate change on krill abundance and ice cover.

This brings me to the end of the species of living seal, and I've also covered the one that went extinct in recent historical time. To wrap up the series, however, I will turn to discuss a little of the fossil history of the animals, and of what happened to them since that distant time when they first diverged from the earliest sea lions.

[Photos by B.navez and Christopher Michel, from Wikimedia Commons. Drawing by Benjamin Waterhouse Hawkins, in the public domain.]
Posted by JK Revell at 15:19