A Rat's Idea of 'Vermin'

Arguably the most important factor in the success of humanity as a species is out ability to modify the environment around us, to take somewhere inhospitable, and not only make it habitable for our species, but enable it to support far more humans than any natural environment possibly could. The existence of cities, and of the great swathes of agricultural land around them are clear testaments to modify the world to the point of creating entirely new environments.

We may be the most spectacular example of a species that can do that, but many others do so, albeit on a smaller scale. They're not all mammals, or even vertebrates - consider termite mounds, of example. Often, the way that one species modifies it environment also helps others, whether intentionally, as in humans providing farmland for cattle, or as an unavoidable by-product, such as humans creating the perfect habitat for rats. This process is called "facilitation", and it seems to have been more studied in botany than it has in zoology.

However, Andrew Edelman, of the University of New Mexico, has been looking at the interaction between two animal species in the Chihuahuan Desert. Banner-tailed kangaroo rats (Dipodomys spectabilis) are, like many rodents, seed-eating herbivores. They make large mounds in the desert in which to live, and, while they're generally pretty anti-social, not letting other rats near their homes during their lifetime, the mounds can nonetheless be passed down from rat to rat for generations, sometimes surviving for over fifty years.

But there's another seed-eating animal that lives in the same desert, and one might reasonably expect the two not to get on very well. This other animal is the rough harvester ant (Pogonomyrmex rugosus), and it makes mounds, too, albeit rather smaller and, naturally enough for ants, home to large colonies, not single individuals. But do they really compete? Well, apparently not, because the study showed that ant colonies are more common, and last longer, near kangaroo rat mounds than elsewhere.

This is, according to the study, probably more like the association between humans and vermin than it is like agriculture. That is, the ants may benefit, but the rats probably aren't getting much in return. Take away the rats, an the ants initially do well - there's more food for them to eat, once the rats aren't taking it. But after a while, they decline in numbers, indicating that the rats are, unwittingly, providing them with a useful service. That service appears to be clearing away vegetation around the giant rat mounds, making it easier for ant queens to found their colonies. Furthermore, by eating the plants with larger seeds, the rats encourage the growth of smaller plants that the ants prefer. 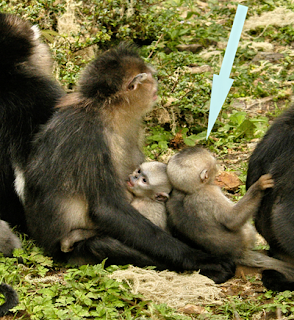 Another thing that we humans do is look after each other's children, even going to the extent of adoption. At least when we're talking about actually nursing infants, this is much less common among other animals, but it does happen. There are various possible reasons why an animal might care for a child that's not it's own. If the species is social enough, caring for nephews and nieces may be a way of sharing out the work without expending effort on a complete non-relative. Young females might care for other young, at least temporarily, as a way of practising for the future. It's even been suggested that males might do it as a means of getting off with the child's mother.

Whatever the reason, Baoping Ren, of the Chinese Academy of Sciences, and colleagues have recently observed this type of behaviour for the first time in Yunnan snub-nosed monkeys (Rhinopithecus bieti). Like many primates (including, for example, gorillas), these monkeys have a harem-based social system. Family groups consist of a single male, whose main role in child-rearing is to chase off intruders, and as many females and their offspring as he can attract. The remaining adult males live in groups of their own nearby, but don't get access to the females.


One day, while observing groups of these monkeys in Baimaxueshan National Nature Reserve, the researchers saw a five month old monkey that they knew had been born into one harem apparently staying with another. He was following them about, and playing with a couple of other young monkeys from his 'adopted' harem. You can see him here, in picture B. (A is the adult male).

Two days later, when pictures C and D were taken, he was still there. In fact, you can see in picture D that he is actually nursing from one of the females, who doesn't seem too bothered, even though she obviously has a child of her own with her at the time. At five months old, he could probably, just about, gather his own food, but he'd still be substantially relying on milk at that time, and these monkeys are at least a year old before they're fully weaned.

He remained with the group for a few more days, apparently quite peacefully, until he was seen joining an all-male group - presumably foregoing milk by this time, for whatever reason. Two months after he had left, he was seen back with his mother, apparently none the worse for the experience.

This is just one instance, an anecdote rather than any kind of formal study. We don't know how the young monkey became separated from his mother, why nobody in his adopted harem seemed to mind, or how he eventually got back home. But it does show that these particular monkeys, even the males, are tolerant of each other's young, and that at least one young monkey benefited from that fact. Perhaps the females just found him cute and cuddly.

It goes without saying that bats fly with their wings. But, if you look at most bats, you'll see that the wings are not the only flight membranes. The wings themselves are formed from a number of membranes, some spread between the fingers, with a particularly large one running from the last finger to the body; there is usually also a smaller membrane on the forward surface of the arm, running from the wrist to the shoulder. But there is also, in most bats, a tail membrane, not part of the wings proper, but running instead between the legs and the tail. Although it's clear that it must be there for a good reason, not many studies of bat flight have really looked at it.

Rick Adams and colleagues, of the University of Northern Colorado, filmed 95 bats as they launched themselves into the air from the back of a pickup truck. The bats belonged to five different species that they had managed to collect, all of them vesper bats, members of the largest bat family (and, indeed, the second largest of all mammal families, after the mice). Here's the result.

It's clear from that video that the bat is moving its tail in coordination with its wing beats. After pushing itself off the ground with its wrists, and possibly also its legs, the bat spreads it legs, extending the tail membrane, as the wings beat downwards, and then pulls them back together as they move upwards. The way its doing this would generate rearward thrust during the downbeat - the powered part of the flight that generates the most forward motion. During the upbeat, the tail flips under the body, either to reduce drag, or possibly to generate lift, like an aeroplane lowering its flaps during take-off. This is different from what we know of bird flight, where the tail acts as a stabiliser, but does not itself generate thrust.

In fact, if it resembles anything, the authors argue that it's the up-and-down motion of a dolphin's flukes as it swims through the water. Not all bats have large tail membranes, as the vesper bats do, so they can't all be doing this. There's also a good chance that vesper bats only do this as they're taking off, when thrust and lift are especially important, or at least when they're flying slowly. Evidently, there is more we have yet to learn about bat aerodynamics.


More Bats in the World

Still on the subject of bats, there has been some revision recently of some of the species of bats from Vietnam and eastern Asia in general. The bats in question belong to the genus Hipposideros, which itself belongs to the snappily titled Old World leaf-nosed bat family. In two separate papers, Vu Dinh Thong and colleagues re-examine the rather complicated issue of just how many species of these bats there are.

These are medium-sized bats living in tropical jungles, and, at least to human eyes, they don't look that different one from the other. Hipposideros itself was named as a genus way back in 1831, and, as is often the way with small mammals, people haven't really stopped arguing about how many different kinds there are since. The new studies look at a whole host of features to demonstrate that there are more species than we thought. Genetic analysis, as always, plays a big part. If we can prove that, not only can the bats not be interbreeding on any scale, but that they clearly have different genetics, we've gone a long way towards demonstrating that they're different species.

But genetics alone isn't always a clincher. So it really helps to be able to say that, yes, we can tell them apart without having to take a blood sample. So the studies describe in detail what the bats look like, inside and out, comparing the shapes of their skulls, teeth, noses, and penises, as well as listening to their ultrasound calls to find any difference.

From all of this, the authors conclude that the three subspecies of lesser leaf-nosed bat (H. turpis) are actually three different species. Indeed, the genetics show that they aren't even that closely related, with several other, undisputed, species lying between them on the newly revised family tree. One of them, for instance, turns out to be related, not to the "real" lesser leaf-nosed bat, but to the greater leaf-nosed bat (H. armiger). So, bearing in mind that one subspecies has to be the "real" species (it's whichever one happened to be collected first, in case you're wondering), that's two new species that will need names.

Those are just "promotions" of something we already knew about, though. While collecting specimens of greater leaf-nosed bat, however, the researchers found something we didn't - eleven specimens that belonged to no known species. Genetically, acoustically, and physically distinct, the new bat has been named as Griffin's leaf-nosed bat (H. griffini), in honour of a researcher into bat echolocation. It lives, that we know of, in the forests of the Cat Ba and Chu Mom Ray national parks in Vietnam.

This sort of thing happens a lot. Just last month, Samantha Stoffberg and colleagues, of the University of Stellenbosch, reported that an entirely unrelated bat from South Africa, once thought to be a full species, but long since relegated to a mere subspecies of Geoffroy's horseshoe bat (Rhinolophus clivosus), has at least a plausible claim for being promoted back up again. Even if not (and the paper doesn't specifically call for that), it's genetically distinct and lives in a different environment from its kin.

Such is the great diversity of just one group of one kind of animal on Earth.

[Image from Ren et al, 2012, released under the Creative Commons license]
Posted by JK Revell at 18:52