The iconic Ice Age carnivore is, of course, the sabretooth cat. However, as I mentioned when discussing the Mid Pleistocene, sabretooth cats when extinct in Europe well before the Last Ice Age. (Well, maybe not... but at any rate, they seem to have been very rare). So what were the dominant predators in Europe during that final, and most extreme, period of intense cold?

It probably depends on how small a predator you're willing to count. Animals like weasels, stoats, and shrews were presumably very numerous, even if their skeletons are often too delicate to preserve well. Moving up the scale, the most numerous carnivoran fossils from the time belong to foxes. Both the modern red fox and the Arctic fox were widespread in central Europe at the time, although the latter was presumably more comfortable.

Another modern animal that we wouldn't be surprised to find among the snowy forests and open tundra was the grey wolf. Indeed, grey wolves may well have originated in Europe from an American ancestor, before heading back over the Bering land bridge. If so, they were probably quite quick about it, since they are found across the Arctic on both sides of the Pacific from an early date.

All of these are creatures that are still found in Europe today, although not necessarily in large numbers - wolves are more common in the wilds of Asia and North America than they are in densely settled Europe. But I've been harping on through this series about how "African" European wildlife looked at the time, and that's as true of the big carnivores as it is of herbivores such as elephants/mammoths and rhinos. One of the clearest instances of this is the presence in Pleistocene Europe of lions.

European cave lions survived through much of the last Ice Age, and we have several fossils of them. There is, however, a fair amount of debate as to what they actually were. Some evidence suggests that they were merely a subspecies of the modern lion, albeit one notably different from any of the surviving subspecies (even the ones in India, which we'd reasonably expect to be different from the African sort). On the other hand, other evidence shows that they were a separate species in their own right (Panthera spelaea), although perhaps only by a very narrow margin. Take your pick; they seem to be right on the line.

Still, we do know that they were quite different from modern lions in a number of respects, and not just choosing to live in a cooler climate. As with mammoths, we have the great advantage that the Europeans of the day painted pictures of them on cave walls. Those pictures show us something quite surprising: the males apparently didn't have manes. True, cave lions were, as a whole, probably shaggier than the modern sort, but still, mane-less lions are not really something you expect to see. We can also tell, from fossils this time, that they were large, standing around four feet high at the shoulder. That's not quite out of the range of modern lions, but it does mean that even the average cave lion was about as large as the biggest lion alive today.

Although they doubtless ate many other animals, too, for at least the last part of their history, European cave lions apparently fed largely on reindeer, and it could be that the disappearance of reindeer from much of Europe at the end of the Ice Age was a major factor in the extinction of the cave lions themselves around 12,000 BC. Certainly, genetic studies seem to show that, whether species or subspecies, cave lions left no descendants into the modern day. They were, incidentally, by no means the last kind of lion to die out - the Barbary lions of Morocco went extinct as recently as 1922.

Its worth noting that European cave lions didn't actually live in caves, and, indeed, some scientists have taken to calling them by the more accurate term "steppe lions". The more common name comes from the fact that caves are where we find the fossils. (It's worth noting at this point, perhaps, that there is also such a thing as an American cave lion. It's a different animal, and almost certainly not an actual lion). But what, you might wonder, were they doing in caves if they didn't live there?

It turns out that cave lions were locked in a vicious battle with a deadly enemy, one that we would also think of as African today. These were the cave hyenas.

There is no real dispute that cave hyenas were not a distinct species. Instead, they were a subspecies of the largest and most common hyena today, the spotted hyena (Crocuta crocuta). They were, in fact, even larger than their surviving kin, perhaps because of Bergmann's Rule that the the colder the environment, the bigger the animal. If cave lions didn't live in caves, it seems that cave hyenas did, at least some of the time. When that happened, they left the bones of their meals behind.

And, yes, those bones include those of cave lions: it seems that cave hyenas dragged the carcasses there to eat them. That's not to say that the hyenas were actually hunting the lions, though. Certainly they were likely to have been very aggressive towards one another, because the African kinds still are today, and fatalities doubtless occurred. But, on the other hand, hyenas are scavengers. Cave lions had to die eventually, and no self-respecting hyena would pass up the opportunity to eat a dead one if it presented itself.

Indeed, cave hyenas seem to have eaten just about any large mammals they could get their claws on. Gnawed bones from hyena caves include those belonging to reindeer, wild horses, bison, red deer, Irish elk, ibex, and chamois. Nor did they stop at herbivores; aside from cave lions, they also seem to have eaten wolves, bears, and possibly wolverines. Particular favourites seem to have been woolly rhinoceroses and even mammoths. Given the difficulty of even a  large pack of hyenas taking down a fully grown rhino or mammoth without at least some of them getting badly injured in the process, that seems to me pretty good evidence for them scavenging the already dead!

The caves that these packs of hyenas used were, in at least some cases, subsequently taken over as human dwellings. But hyenas and "cave men" were not the only large animals to inhabit such places. Or by any means the largest. 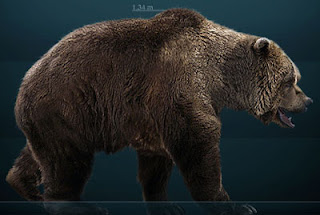 Unlike cave lions and hyenas, there is no doubt that cave bears (Ursus spelaeus) are a distinct species. They evolved from the earlier Ursus deningeri perhaps around 0.25 million years ago, but with the aid of DNA recovered from some of their more recent fossils, we can show that their last common ancestor with modern brown bears was much earlier than that, around 1.2 million years ago.

Cave bears were about the size of the largest bears alive today, perhaps weighing around half a ton or so. It's likely that they looked quite similar to brown bears, too, although there were some notable differences. In particular, they had shorter snouts, heavier and more rounded jaws, and a high, domed forehead. At least some of these features were likely related to their diet. Cave bears seem to have been essentially vegetarian, much as modern pandas are. However, they had a broader diet than pandas do, with microscopic wear patterns on their teeth suggesting a diet high in tough foods like nuts and tubers, although presumably alongside softer fruits when they could get them.

At least, that's the standard story. Some more recent evidence indicates that, for at least some times of the year - perhaps while preparing for hibernation - cave bears switched to a more meaty diet, probably including a fair proportion of bone. While the shape of their teeth generally suggests a plant-based diet, they did have powerful jaws (as do pandas, in fairness) and there can't have been many creatures that could fight off a hungry cave bear, if it came to it. Even cave lions, for example, have been shown to have sustained head injuries while tackling the much larger bears.

The "cave" moniker is perhaps even more appropriate for the bears than it is for cave hyenas. Whether or not they lived much of their lives in caves, that certainly seems to be where they hibernated, and therefore, if they were anything like modern bears, also where they raised their cubs. When bears finally die of old age, it's often while they're hibernating (which I'd imagine is quite a peaceful way to go), explaining why we have found literally thousands of cave bear fossils in such locations. Individual caves may have been host to generations of cave bear, with one complex having been used repeatedly over a 9,000 year period, doubtless giving a nasty shock to any humans who wandered in looking for somewhere to live.

Because, of course, the late Pleistocene is also a time of humans. The first humans reached Europe around 800,000 BC, or, if you prefer, 0.8 million years ago. These, of course, were not our current species, or even likely our immediate ancestors. Somewhere between 0.6 and 0.35 million years ago, depending on where you draw the line between species, they evolved into the famous Neanderthals, who were to dominate Europe for most of the time since. Neanderthals are usually considered to be their own species (Homo neanderthalensis) these days, although that's not inarguable. Certainly, they seem to have interbred with our own ancestors at some point, leaving traces in the DNA of European and Asian, but not African, humans.

Some time around 0.08 million years ago, our own species arrived from Africa. By 0.03 million years ago, Neanderthals were, for whatever reason, extinct, and so the final part of the Last Ice Age, and the last part of the Pleistocene, is marked by our own occupation of Europe. Around 10,000 BC, the glaciers made their final retreat, and, almost at the same time, humans in the Middle East developed agriculture. The innovation spread across the continent, changing its landscape forever.

And, with that, the Pleistocene ended, and the Holocene began.

[Photo by "HTO", cave bear reconstruction by "sergiodlarosa", from Wikimedia Commons]
Posted by JK Revell at 14:54