Yes, it's that time of year again. This post will be current as of 1st April, and that means it's time to hand over to... birds!

The largest birds, both living and extinct, are flightless. This is hardly surprising, since being small and light is a considerable boon to anything that wants to get off the ground. Nonetheless, there are some really big birds that can, in fact, fly. Going by wingspan, rather than body weight, the largest flying bird alive today is the wandering albatross (Diomedea exulans). In second place, and also the third-heaviest of any flying bird behind a couple of species of bustard, is the Andean condor (Vultur gryphus). This has a whopping wingspan of up to 310 cm (10' 2") and North Americans probably won't be surprised to discover that the California condor (Gymnogyps californianus) isn't far behind.

The Andean and California condors are, indeed, each other's closest relatives. They are both members of the New World vulture family, which also includes such things as the widespread turkey vultures. They are distinct from the Old World vultures, which are members of the hawk family, although they're very much in the same corner of the bird family tree.

In the mid-1900s, palaeontologist Loye Miller was excavating part of the La Brea tar pits when he came across a jumble of large bird bones. In 1909 and 1910, he described three new species of exceptionally large condor from these bones. Two, described on the basis of some leg bones, were fairly typical for condors apart from their size, but the other, described from parts of the skull and some shoulder bones, was slightly odd. Miller called this one Teratornis - the "monster bird". It's now thought to have had a wingspan of at least 350 cm (11' 6"), making it slightly larger than the largest albatross ever recorded.

In 1925, with more complete skeletons to look over, Miller realised that the legs of one of his "condors" actually went with the shoulder and skull of Teratornis, and those two "species" were really just different parts of the same animal. This, of course, emphasised just how similar Teratornis was to living condors, but the differences in the other parts of the skeleton remained, and Miller defined a whole new family of birds - the teratornithids - on the basis of his discovery.

At the time, there was only one known species in the newly-erected family. In 1938, the third of his "condor" specimens from Rancho La Brea was moved into the family as well. It's definitely a different species, but whether it deserves the separate genus name of Cathartornis that he gave it is less certain. A third species, now known as Aiolornis, was discovered in 1952. Among other things, it's distinguished by being even bigger, with a wingspan of at least 5 metres (16' 5").

All of these species lived, so far as we know, only in North America, and they all lived during (or very shortly before) the Ice Ages, with the last one dying out as recently as 8,000 BC. The first hint that teratorns also lived in South America came in the 1970s, although these particular remains have never been fully described and may still turn out to belong to something else. In 1980, however, came the announcement of a definitive example; a teratorn that lived in Argentina during the Late Miocene. Named Argentavis magnificens, it's the largest of all teratorns, with a maximum wingspan of at least 6.5 metres (21' 4"), if not larger.

There are manned aircraft smaller than this. (Not very many, I grant you, but still). 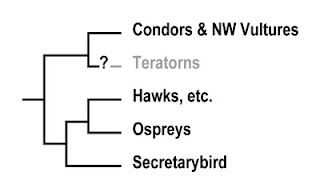 A number of other species have been described since, mostly in South America, and often from very fragmentary remains. However, apart from absolutely massive, there's another significant thing about them: they lived much earlier than any of the known North American forms. In fact, the oldest known teratorn, Taubatornis, was found in Brazil, dating to the end of the Oligocene around 25 million years ago. It's also the smallest, probably smaller than a living condor, although still pretty large by the standards of most birds.

Which seems to tell us two things. Firstly, teratorns evolved in South America, heading north only after the formation of the Panamanian isthmus at the end of the Pliocene. Quite why they left it that late is unclear; we know they could cross the sea if they really had to, since some fossils are known from Cuba, which has been an island since at least the time of the dinosaurs. But perhaps some climate conditions made such migration difficult (although evidently not impossible).

Secondly, once they reached the north they then died out in the south, leaving only their northern relatives to brave it through the Ice Ages. Indeed, there's a distinct gap, with the last definitively known South American species being around 6 million years old, and the oldest North American one around 3 million years old.

Or so things stood until last year. Because, in 2021, researchers announced the discovery of several new fossil teratorns from South America. Unfortunately, while these do consist of quite a number of bones from different parts of the body, these are from multiple different fossils, none of which share any particular bones in common. Which means that we can't be sure how many species they represent, and, to avoid the problem that Miller had back in 1909, the discoverers of these new specimens have decided not to try and name them as species just yet.

Significantly, however, the fossils are very recent by the standards of such things, dating to somewhere between 220,000 and 70,000 years ago. That's most likely during the Eemian Interglacial - the warm period between the Penultimate and Last Ice Ages, although it could overlap with the end of the former and/or the beginning of the latter. Either way, it's much, much later than the previous last known teratorn in South America.

Were these straggling survivors of the original South American teratorns? Or did those really die out in the Pliocene as previously thought, before some crossed back the other way from the north? And, whichever of those is true, why were these ones only found in Argentina? There are, after all, plenty of other fossil sites of similar age in South America, some of them with good records of the birds of the time. For instance, there's a tar seep similar to that at Rancho La Brea in Venezuela that has preserved the skeletons of dozens of species of bird - including condors. But not a hint of a teratorn.

This could just be bad luck, but it seems more likely that the new Argentinian teratorns had some specific requirements for where they lived that they just couldn't find elsewhere. The assumption has usually been that teratorns were predatory or scavenging birds, just like living condors. After all, they do have many features in common with condors, including such things as hooked beaks that look ideal for tearing flesh. Their size and the shape of their legs and wings also suggests that they flew and probably hunted in a similar manner.

However, while that may have been true of the best-known species, such as Teratornis itself, it might not be for all of them. The older fossils have all been found in what were once river banks and lakeshores, and so were these new Argentinian specimens. In this regard, it's worth noting that teratorns did also have some skeletal similarities with living storks and pelicans, such as having unusually long legs without especially powerful claws. As a result, it has been previously proposed that the earlier species at least, may have primarily eaten fish in a manner similar to those birds.

That would better fit with a more restricted range and certainly, teratorns were large enough to swallow fish whole as storks and pelicans do. But it's also hard to overlook the many similarities of the teratorns with condors. So far as we can tell, the better-known species do seem to have been active predators and at least part-time scavengers, vastly overshadowing the eagles and vultures of the modern world.