Wolves at the Campfire 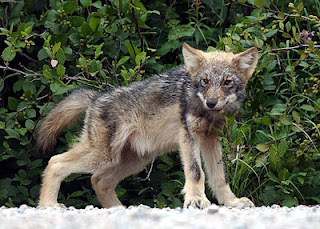 There's an internet meme, which exists in several different variants, that makes a half-serious joke about dog domestication. A typical version shows a picture of a wolf ostensibly heading to a camp of stone age hunters, hoping to get some food, and thinking "what's the worst that could happen?"... followed by a second picture captioned "thousands of years later" and showing an inbred domestic dog dressed in ridiculous knitwear. The second part is an accurate enough description of what thousands of years of domestication and directed breeding have done to at least some dog breeds.

But what about the first part? That's showing what's probably a common understanding of how wolves originally became domesticated and turned into dogs. Essentially, dogs domesticated themselves, with those wolves that were least wary of humans, due to whatever quirk in their individual personalities, being the ones most likely to get close to them. Over time, there was further selection in this direction, with the friendliest wolves also becoming the most popular/useful to the humans until, eventually, domesticated breeding was able to take over.

This idea was first proposed in 1953, by Konrad Lorenz, one of the founding fathers of behavioural biology,  better-known for his discovery that newly hatched goslings "imprint" on the first moving object they see, treating it as their mother from then on. It's not only a theory seen in popular books (and memes) but pretty much the dominant explanation in scientific reviews, too. Indeed, one might wonder if there is any plausible alternative.

Well, Charles Darwin certainly thought so. In The Variation of Animals and Plants Under Domestication, published nine years after On the Origin of Species, he proposed that humans had a more direct role from the beginning. His thinking was that early humans took wolf pups away from their mothers, raised them as hunting companions and then bred more pups from them. The wolves, as he saw it, never had much choice in the matter.

That, of course, was over 150 years ago and we have moved on considerably since then in our understanding of both biology and archaeology. For that matter, we probably have a more solid understanding of how wild wolves behave. Can we use this new evidence to compare these two competing explanations and see which, on balance, is more likely to be true? Is conventional wisdom correct, or did Darwin have it right all along?

In order for wolves to domesticate themselves, it follows that some would have to be more tolerant of humans than others. Wolves, as a rule, do not like humans and try to stay away from them. One can hardly blame them, since while wolves are often a figure of fear in stories, our usual response to that is to try and kill them. Wolves do kill humans from time to time (mostly children) but, on balance, they have more to fear from us than the reverse. True, the main reason for that today is humans trying to protect their livestock, which wouldn't have been the case when wolves were first domesticated because we didn't have agriculture at the time. But we would still have competed, since we were largely trying to eat the same food sources.

Even so, wolves do vary in their innate aggressiveness and in those few areas where wolves have nothing to fear from humans they may approach them... and not in order to eat them, as they would with most other creatures of our size. This, for instance, has been observed in some of the islands of northern Canada, where wolves and humans barely came into contact for thousands of years until the construction of weather stations, modern military bases, and the like. Even in more densely settled areas today, wolves will sneak in to feed on refuse, although the modern human lifestyle would likely prevent them from bonding any more closely with the providers of that refuse.

So it's entirely plausible that some wolves might approach a human camp to eat our scraps and that, over time, the more tolerant ones might stay, bonding with humans as if they were part of the same pack. But it has been pointed out that there's a major issue here. Dogs were first domesticated during the Last Ice Age, no later than 12,000 BC, and possibly quite a bit earlier. The total population of the world at this time has been estimated at somewhere between 2 and 8 million, with that in Europe alone somewhere below 30,000. It has been argued that that simply isn't enough of a population density to produce waste dumps that would make it worth the wolves' while to hang around a particular campsite. Not to mention that hunter-gatherers don't really leave much waste, and, at least today, even have cultural taboos against doing such a thing.

It would work well enough if (as Lorenz probably thought) dogs were first domesticated around 8,000 years ago when primitive towns and villages, with their associated middens, became common. But we now know that that simply isn't a feasible date.

So what about Darwin's idea that domestication was a more deliberate act by humans capturing wolf pups and raising them as companions?

In order to do this, you would need to capture the wolf pups at exactly the right age. Wolf mothers birth and raise their pups in a den, which is either a natural cavity of some kind or, failing that, an excavated depression. For the first ten days of life, pups rely absolutely on their mother and any attempt to capture them at this point would be unlikely to end with their survival. At around 20 days, however, they start to socialise, so any time after that is probably too late. It's a narrow window... but if you do capture them during that ten-day gap, then the growing pup will bond with human caregivers and accept them as part of the pack.

The problem with this, of course, is that this is before the wolves are weaned (at around 30 days) so you'd need to provide your wolf pups with milk - and this, remember, is long before cows, goats, or the like have been domesticated. This may sound odd from a modern, western perspective, but a number of modern hunter-gatherer societies do indeed breastfeed domestic animals, including dogs. So, not only can this work, but it's something that we know people do.

But why bother doing this with a wild wolf? The most obvious answer, perhaps, is to raise the pups as hunting companions, although using them as guard animals would also work. But it's entirely possible that another factor was at play here: puppies are cute.

That may be a shock, but it has been scientifically proven.

Keeping pets purely for companionship is not a modern human invention. Humans 15,000 years ago were just as human as we are, even if they had a very different society, and there's no obvious reason why caring for a pet wouldn't be at least part of their reason for adopting a wolf pup. Certainly, it seems to fit better with what we know of human behaviour than the assumption that early hunters would have been happy with adult wolves prowling around their campsites to steal food.

Keeping a small population of tame wolves, whether for hunting or companionship, isn't such a drain on resources as constantly being raided by a wild wolf pack. It also makes it easier to see why the dogs didn't simply breed themselves out of existence by back-crossing with wild wolves, which they would have had ample opportunity to do in the early stages if the scavenging hypothesis is correct.

As a result of all of these arguments, despite the more widespread popularity of the scavenger hypothesis of dog domestication, in recent years opinion has begun to switch around towards the idea that it was humans, not wolves, that initiated the process. Although wolves will, indeed, scavenge on human surplus food when they can get away with it, it seems to fit better with both what we know of wolves and what we know of early humans that the first dogs were descended from pups we deliberately took into our care, later breeding the more tractable results to become hunting animals, guard dogs, herd dogs, and, yes, cuddlesome pets.

[Photo by "Peupleloup", from Wikimedia Commons.]