The majority of hoofed animals living today belong to the artiodactyl order, known as the "even-toed ungulates" or, in plainer English, cloven-footed animals. This order includes such animals as deer, antelope, cattle, and pigs, as well as some of their non-hoofed relatives, such as camels. In comparison, there are relatively few living species of the perissodactyl, or "odd-toed ungulate" order, which today consists only of the horses, rhinos, and tapirs.

Yet, as so often, this group was once more diverse. Not only were there many more kinds of (for example) rhinoceros, but there were entire families of perissodactyl that are no longer with us. It is also an ancient lineage, on a par with other major groups, such as the primates. Molecular studies allow us to make some educated guesses as to when the horse-like and rhino/tapir-like perissodactyls last shared a common ancestor, and this turns out to be around 56 million years ago, at the dawn of the Eocene, not long after the non-avian dinosaurs had gone extinct. While this is just an estimate, it also happens to be not much older than the earliest identifiable fossils of the group, so there's a good chance it's fairly accurate.

However, when we go back that far into the history of a given group of animals, it can often be difficult to figure out exactly where representatives of the group fit within the larger family tree. There's the fact that, the closer we get to any divergence point, the more similar we'd expect members of each sub-group to be, but also the fact that there were surely many early-branching relatives of the living sub-groups that didn't leave descendants. So many of these very early perissodactyls are - as with many other mammals of their time - somewhat ambiguous in their relationships.

One such group are the lophiodontids. These are significant because, for many millions of years, they were the largest ungulates living in Europe and must have played a significant role in the ecology of the day. The most complete lophiodontid fossils come from the Middle Eocene, not long before they died out, and include the tapir-sized Lophiodon, from which the family takes its name. From this, we can tell that the animals did loosely resemble tapirs, but that they didn't have the proboscis-like snout of those animals, and had curved claws instead of small hooves.

For a long time, it was assumed that lophiodontids were, in fact, primitive relatives of tapirs. The differences were too great to consider them as members of the same family - if nothing else, tapirs don't have claws - but closer to them than to anything else alive today. Over the last twenty years or so, this has become less certain, and the more modern consensus seems to be that they may be more closely related to another extinct group, the chalicotheres.

The chalicotheres belonged to a third branch of the wider perissodactyl order, distinct from both the tapir/rhino clade and that of the horses, although more closely related to the former. These are well-known animals, dying out less than a million years ago, during the middle of the Ice Ages. Later representatives of the group, at least, were large and bulky animals, with a horse-like head, long and muscular forearms that have been compared to those of a gorilla, and 'hooves' shaped into long claws similar to, but more dramatic than, those of the lophiodontids.

To try and untangle whether the lophiodontids really were chalicothere-like animals, relatives of tapirs, or somewhere in between those two options, one thing that might help is to look at, not the last and most specialised members of the group, but the early ones. Fossils of these animals are, however, as one might expect, not so well preserved. 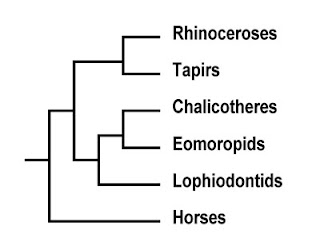 The earliest member of the group known is Lophiaspis, first described by Charles Depéret in 1910 from a portion of a palate he had uncovered at a fossil site near Marseille. In the hundred years since, we have discovered part of the animal's jaw and a few isolated teeth, but nothing else. Most of these fossils were found in southern France, but some were found further north, near Paris, and others from northern Spain and central Portugal.

This is enough to tell us that the animal lived in southern Europe during the Early Eocene, around 54 million years ago - just 12 million years after the dinosaurs died out. It's also enough to say that they were perissodactyls, and most likely browsing animals of some kind, but it's hard to say much beyond that from teeth alone.

Fortunately, a review of museum specimens conducted last year was able to recover many more fossils identified as belonging to the earliest species of Lophiaspis, including most of the skull and a fair bit of the forearm and shoulders. This confirmed the modern picture of the lophiodontids as relatives of the early chalicotheres, and more distantly related to the rhinos and tapirs. Lophiaspis itself is a particularly primitive member of the group with, for example, less advanced dentition, as well as smaller size - it seems to have been about the size of a large dog, which is actually quite big for a European mammal of the time.

So how does this fit in with the early history of the perissodactyls as a whole? It seems that these very early lophiodontids, so far known only from southern Europe, are most similar to early chalicothere-like animals known from Mongolia. This suggests Asia as the origin for the order as a whole, which diversified rapidly around the dawn of the Eocene, splitting off first the horses, and then the ancestors of rhinos and tapirs. Animals belonging to the remaining, third group, then crossed into southern Europe, where they gave rise to the lophiodontids, before heading north and west into America. (This is long before the Bering land bridge, so the route for doing this would have been the other way, through Greenland).

Southern Europe was a collection of islands at the time, and separated from Asia by the Turgai Strait, connecting what would now be the Black Sea and the Arctic Ocean. Despite this apparent barrier, a number of other animals seem to have made the same journey, including several primitive primates, and it's probable that the Strait wasn't completely open for the entire time period. The lophiodontids themselves didn't make it out of the Eocene, dying out around 39 million years ago, but they were a key part of the early evolution of the odd-toed ungulates and, for a while, were among the largest animals in their landscape.