Most members of the dog family can be described, broadly speaking, as "foxes". The term "fox" no longer has a strict scientific meaning, since it encompasses two separate lines of evolution that aren't directly related to one another. Furthermore, as we'll see in a few month's time, there are some animals within those lineages that really aren't foxes at all, as we'd normally think of the word.

Nonetheless, it's a term that's widely used, and is taken to refer to small to medium-sized canids that have have bushy tails, prominent ears, pointed snouts, moderately long legs, and so on. The archetypal such animal, and the one that most people in the Northern Hemisphere likely think of first when the term "fox" is used without any further qualification, is the red fox (Vulpes vulpes).

The red fox is, in fact, the largest of the "true" foxes (as opposed to those of the second, younger, evolutionary line, which are actually more related to wolves). It is also perhaps the most brightly coloured of all foxes, although there is some variation in the coat colour, with brown, yellowish, and even silvery-grey individuals. None of these match directly to any of the more than forty subspecies that have been identified over the years, although it's likely that many of those represent rather finer hair-splitting than is actually required.

Red foxes are found throughout Europe, save for Iceland and some of the smaller islands here and there. While it was here that it was first named, the same species is found throughout almost the whole of Asia, including Japan, as well as the Nile Valley in Africa and parts of the south coast of the Mediterranean. Although once thought to represent a distinct species, it is now agreed that the American fox is another form of the same animal, and that red foxes are therefore found throughout Canada and through all but the driest parts of the US. All of this makes them one of the most widespread of all carnivorous mammals, beating even wolves in modern times.

To confuse matters, many red foxes found in the eastern US are actually descendants of European animals introduced during colonial times. The home-grown ones, on the other hand, include the so-called "silver foxes", a colour variant that was also the subject of foreign introduction, in their case being moved from America to Russia to support the fur trade, and since spread to fur farms elsewhere. For that matter, red foxes have also been introduced to Australia, apparently so that they could be hunted by British colonists, rather than to, say, control the rabbit population (at which they been singularly ineffective).

The preferred habitat of red foxes is forest margins and light woodland, but as their vast range indicates, they'll live just about anywhere, from deserts to tundra and from low-lying plains to mountain tops. Like most foxes, they will eat virtually anything that's small enough, which greatly helps with their ability to spread. In many parts of the world, they are also the largest wild animals found in urban areas, associated primarily with the growth of relatively leafy residential areas during the 20th century.

Prior to about the 1930s, urban foxes didn't really exist, so far as we can tell from records, and even today they are less often found in heavily concreted inner cities or industrial areas than they are in middle class suburbs. This is, apparently, especially true in North America, perhaps because there is more wilderness available on that continent than in Europe, and so less need to run the risk of human interference. While red foxes tend to be less active during the daylight hours anyway, it is also perhaps unsurprising that those living in cities tend to be even more nocturnal than their rural kin.

These urban foxes, of course, do a lot of scavenging, going through domestic refuse and the like. One study conducted in Oxford in the 1980s, however, showed that this formed only a little over a third of their diet, with much of the rest made up of earthworms. Small mammals and birds made up only a quarter of the diet between them, with much of the rest being fruit. 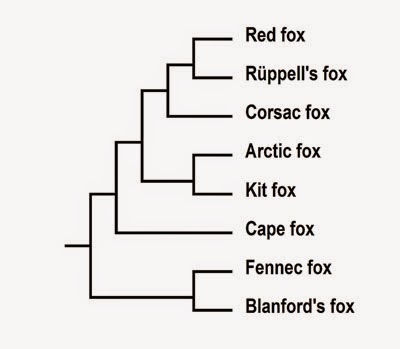 Foxes differ from wolves in more than just their size. Although social animals, at least in comparison to many other carnivores, they are not pack hunters. Even where multiple adult foxes live together, as does happen, each hunts alone, and this means that they have to tackle animals that are smaller than they are, while wolves will take down prey that are noticeably larger than themselves. Red foxes, for example, typically won't eat anything larger than about 3.5 kg (7 lb 12 oz.), unless it's already dead when they find it. At least with smaller prey, all species of "true" fox also share a distinctive attack style, in which they jump up into the air and pounce down on their target, trapping it beneath their fore-paws.

Another difference is that where wolves and their relatives bring regurgitated food back to the den to feed their pups, foxes do not. Instead, they bring back live prey, giving the pups a chance to play with it and so learn their own hunting tactics before eating. Again, this seems to be true of all foxes, not just the red kind.

In another pattern that's typical of foxes, the red species most commonly lives in mated pairs. However, this is by no means a universal arrangement, and some males have more than one partner. As happens with some other canids, even where the younger females of a group don't breed (which many of them do), they help in rearing the young of older females in their group, even going so far as to produce milk and help to suckle the pups. While there's basically never more than one adult male in a group, however, his partner(s) aren't particularly loyal, and the paternity of any pups is rarely certain.

While they may not be pack animals, and have no need to coordinate their activity on the hunt, red foxes nonetheless have fairly sophisticated means of communication. Almost thirty different kinds of call have been recorded, although the precise meaning of all of them isn't entirely clear. Foxes also maintain territories, marked in the same way as other dogs are inclined to. While those in most areas are constant, with a given pair or group maintaining basically the same territory for as long as they live, those living in more densely settled urban areas seem to shift about a lot, moving to a completely new area once every 13 months or so.

In many places, including much of Europe, and wide swathes of Canada and northern Asia, the red fox is the only native species of fox. However, there are also a number of places where it is not alone, sharing its range with some other, often slightly less generalist, species. One of the most widespread of these is the corsac fox (Vulpes corsac), a particularly close relative.

Incidentally, although the word "corsac" sounds as if it might be some obscure adjective to English speakers, it's really just the name for the animal in Russian, and is therefore sometimes used on its own - the "fox" being redundant, much as a term like "pony horse" might be. But I'll stick with more usual term in English.

Corsac foxes are somewhat smaller, and noticeably paler, than red foxes, and they inhabit the dry grasslands of central Asia, from the Caucasus Mountains to Manchuria, and reaching as far south as Afghanistan. They manage to live alongside their red cousins at least in part because they prefer the open steppe land to the forest margins and rugged terrain favoured by the latter. This is important because they do tend to eat similar food... or, to put it another way, they both eat whatever they can find, so there's inevitably going to be competition.

Having said that, there is a tendency, at least during the summer, for corsac foxes to focus on smaller prey, eating more beetles and less carrion than red foxes, for example. This is less true during the harsh winter months, when both species are presumably getting desperate for food. At such times they also resort to eating more plants than they would otherwise, and in places such as Mongolia they may play a significant role in seed dispersal. In general, though, we can say that corsac foxes eat a lot of rodents, which, in their part of the world, means mostly ground squirrels, lemmings, gerbils, and wild hamsters. They need to drink very little, something that is important in their semi-arid habitat.

While they live at high altitude, being in the middle of a vast continent, they prefer flat land in which to pursue prey, and avoid the mountains. Indeed, although they don't mind the presence of snow, they have difficulty hunting if it gets deeper than about 15 cm (6 inches). To avoid this, they have been reported to follow herds of antelope about in winter, taking advantage of the fact that they will have trampled and compressed the snow down so that it's less of a problem.

The winter in general is a pretty harsh time for them, as it for almost anything in that part of the world. While they're nocturnal, and thus at least active during the freezing cold nights, they shelter in dens during the day. Although they can dig their own if they have to, they are more likely to pinch those made by other animals, such as marmots and badgers.

They predominantly live in pairs, apparently mated for life, but multiple pairs can bunch up together to share a den in the winter, so they're clearly fairly tolerant of their neighbours. Indeed, they don't seem to be particularly territorial, scent marking the immediate area around the den, but not so much further out. The area that they regularly travel through and hunt in also varies tremendously, being as low as 1 km2 (250 acres) when food is abundant, and up to 40 km2 (15 square miles) in harsher conditions.

Given the various survival difficulties they have, it seems that corsac fox populations vary wildly from year to year, depending how bad the weather is. This, combined with the fact that they live in areas that (not coincidentally) tend to have fairly low human populations, seems to make them quite resilient to threats to their population. Corsac fur is no longer so commonly traded as it used to be, and while there may be specific local threats in some areas, as a species, the foxes seem to be doing well, bouncing back if they are ever over-harvested.

Red and corsac foxes are not, however, the only foxes in Asia, and it is to some of the others that I will turn next.