But when did all this happen? Genetically speaking, all of the subspecies are remarkably similar, and, using estimates for how fast genetic changes accumulate among cats, it is generally agreed that they first diverged less than 100,000 years ago, and perhaps as recently as 76,000 BC. That may sound like a long time ago, and it's during the earlier part of the last Ice Age, which makes sense given the great changes in climate and vegetation going on at the time. But, compared with the other big cats, its actually fairly recent. We know, just from fossils, that the various living forms of big cat must have originated well over a million years ago, which leaves plenty of scope to discover more about the earliest history of tigers, and how they came to be different from lions, leopards, and jaguars. 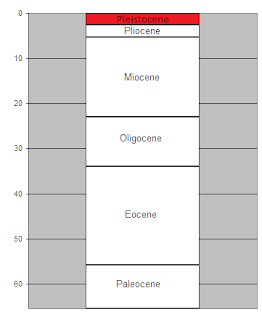 The oldest fossils of the pantherine subfamily (that is, lions, leopards, jaguars, and tigers, as opposed to, say, cougars, cheetahs, or sabretooths) come from Tanzania, and date to over three million years ago. They are, however, fairly fragmentary, consisting of a few pieces of the jaws, and some scattered bones from elsewhere in the skeleton. The animal that left them was probably either a lion, a leopard, or something closely related to both species, but the details are rather unclear. From more recent deposits, we know of the American lion, which is probably a distinct species from its Old World cousin, the European cave lion, which may or may not be, and the European jaguar, which is certainly not the same thing as its South American counterpart. It has generally been believed that the closest extinct relative of the tiger was Panthera palaeosinensis, which lived in China some time around two million years ago.

However, that's beginning to look rather shaky. Just last year, a study was published that seemed to indicate that this fossil was closer to a lion or leopard than it was to a tiger. Now, however, the same author has published a fossil discovery that may well tell us a lot more about the origin of tigers. In a recent paper, Ji Mazák of the Shanghai Science and Technology Museum, together with European colleagues, describe the discovery of the oldest complete pantherine skull so far found - and it turns out to resemble a tiger.

It was discovered near Dongxiang in Gansu, China, and has been dated to somewhere between two and two-and-a-half million years ago. That places it, not during the last Ice Age, but during the first one (or, at least, the first during the Age of Mammals). Named as the "Longdan tiger" (Panthera zdanskyi), the fossil consists of a remarkably intact skull, complete with the lower jaw.

The skull is small, compared with those of living tigers, suggesting that the animal was about the size of a jaguar. However, the canine teeth are exceptionally large, and the nasal bones long, both features seen in tigers, but unusual or unheard of in other big cats. The general shape of the skull is about mid-way between that of tigers and jaguars, and, while it seems to me that the authors are perhaps, over-egging the resemblance to tigers in this respect, the tiger-like teeth do seem to support the contention that this isn't a jaguar.

It is, however, the lower jaw that most strongly indicates that the specimen belongs to a new species, rather than being some previously unknown jaguar-like subspecies of tiger. This jaw is different from that of any living species, and quite dramatically different from that of a jaguar. Instead, its shape is part way between that of a tiger and that of what is, perhaps, the least well known of the living big cats, the clouded leopard of South East Asia. The clouded leopard is often considered the most "primitive" of the big cats - which is to say, it has changed the least since the time of their last common ancestor - so this would make sense, given the age of the fossil. Indeed, in this respect, the fossil resembles those of other extinct cats, most notably American lions.

The authors speculate that their animal may represent the actual ancestor of living tigers, although there can be no way to know that for certain. Despite the skeletal resemblances, the illustration in the paper of what the authors think the animal would have looked like when it was alive shows clear differences with the modern tiger, even allowing for the fact that they haven't chosen to give it stripes. Nonetheless, it seems to be a close relative, and it lived long before the modern tiger diversified into its various subspecies.

Whatever else it may be, the animal was about the size of the very smallest adult female tigers alive today, although it was apparently a male, which means it should have been much bigger. Whether or not it is the direct ancestor of modern tigers, and whether, therefore, tigers first appeared in northern China before spreading south to India and Indonesia, its clear that one of the main things that happened to their lineage is that they gradually increased in size, and presumably did so over the course of the Ice Ages.  Perhaps tigers needed to become larger, because their prey was doing the same. Deer and bovines, which are among their favourite prey, were both growing over this time frame, and it may be that as their prey became larger, so the tigers also grew to make it easier to take them down.