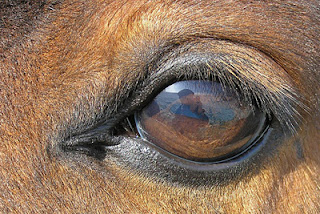 I'd imagine that the first response from anyone who regularly deals with horses to the above would be "well, of course they are!" Your horse shows not just awareness and recognition, and is clearly a fairly intelligent animal, but there seems to be something going on behind those eyes. Horses seem, for example, to be aware of the emotional state of their handlers, and respond appropriately. There is surely more to their actions than simple, pre-programmed instinct.

And, if that is your response, let's face it, you're not wrong.

But then, awareness isn't a simple "all or nothing" phenomenon. All living things respond to their environment in some way; it's part of the definition of being alive. But even once we exclude say, tomato plants, there's still a massive gulf between jellyfish and humans. Once we get specifically to mammals, there is clearly more going in their mental and emotional states than is the case for, say, starfish or parasitic worms. But even then, there is no sharp line between the full consciousness of an adult human and the awareness of every other sort of mammal.

There are gradations and subtleties here. So the question is really not whether horses are self-aware (they clearly are, on some level), but how self-aware they are.

Horses (Equus caballus) have been domesticated for thousands of years, dating back to before the invention of writing, and thus of recorded history. They are among a select group of species that are commonly (but by no means always) given separate scientific names for their domesticated and wild forms. Indeed, it's not absolutely clear whether the species that horses were domesticated from still exists in the wild. Certainly most horses that appear to be living wild are actually 'feral' - descended from domesticated animals that escaped. The exception is the endangered Przewalski's horse from Mongolia; this is undeniably wild, but there is debate as to whether it constitutes a different species, or merely a different subspecies, to the original wild ancestor of our domestic horses.

In addition to their obvious physical attributes, horses were likely suitable subjects for domestication because, as with dogs, their relatively complex social lives in wild herds can be adapted for a domesticated environment. For example, horses are capable of recognising other individuals of their own species, and this has been co-opted to allow them to do the same for humans, so that they can identify familiar trainers and handlers. Similarly, their ability to recognise emotional cues in other horses has been extended, in the domesticated animal, so that they can actually read human emotions. So, yes, your horse really does know how you feel - something that has otherwise only been definitively shown in dogs.

It's hard to see how an animal would be able to do this sort of thing without a degree of internal awareness. There's also plenty of evidence that horses have at least basic problem-solving skills, an excellent long-term memory, and enough understanding to try to make peace after a conflict. Much of this is fairly sophisticated stuff, the sort of thing that we would expect to find in many primates, but not so often in other mammals. But let's try and take it a step further: what sort of test is difficult, but not impossible, for primates to pass, and how well do horses cope at that?

The obvious answer is, of course, the Mirror Self-Recognition Test: can a horse recognise itself in a reflection, or does it think it's looking at another horse?

The test was first devised by Gordon Gallup Jr. in the late '60s, and published in a short communication in January 1970, in which he successfully demonstrated that chimpanzees can pass the test. To find out whether or not chimps could recognise themselves in a mirror, he secretly placed a red mark on their bodies, in a place they could not see without looking in the mirror. If they then used the mirror to explore this mysterious mark, examining body parts they otherwise could not see, he reasoned, they must know what it is they are looking at. They have, in other words, a reasonably sophisticated sense of self-awareness.

Since 1970, the test has been used on a number of animals, and most have failed. It's perhaps unsurprising that the animals that have performed best have been our own closest relatives. In addition to chimpanzees, both bonobos and orang-utans have successfully passed the test, whereas even gibbons typically fail. It has proved possible, with suitable training, to get monkeys to act as if they can pass the test, but this seems to be something that has to be learned, suggesting a lack of true understanding of what's going on.

Horses, of course, are nor primates. But other animals have seemingly passed the test. At least one species of dolphin has managed it, and, more significantly for horses, there's at least some evidence that elephants can do so to. Perhaps most surprisingly, the ability has even been demonstrated in one non-mammalian species: the Eurasian magpie. So what about horses? Do they do better than dogs?

It's only very recently that anyone has tried the test on horses (and, of course, there are a great many other species it has yet to be given to). Part of the reason for this is that the test needs to adapted for the various different kinds of animal one might use it on; chimps, elephants, and sea-lions, for example, all require slightly different versions, depending on their anatomy and normal behaviour. In the case of the horses, they were placed in a specially designed stable including a large mirrored sheet of plastic that they would inevitably pass in front of while moving about. A second, familiar, horse was kept in a separate stable nearby, because horses, being herd animals, tend to get stressed out if they realise they are alone.

The mark itself was placed on the horse's cheek during regular grooming, so that, hopefully, they didn't realise anything had happened. It took the form of a coloured X, and was sometimes replaced with a near-invisible version just to make sure that the horse wasn't reacting to the sensation of a shape stuck to its face, without identifying it visually from the reflection. (And, yes, if you're wondering, horses can see in partial colour).

So, what happened? Well, first of all, there's no doubt that the horses could see the reflection, and reacted to it. And they also seemed to realise that whatever they were looking at it couldn't be a real horse. This is probably because, while they could see it, it didn't smell like a horse, and, when they went up to touch or lick it, it felt like a sheet of perspex, and not a real animal. One of their responses was to take a look behind the mirror, presumably to reassure themselves that there really wasn't another horse there, something they didn't do when the mirror was just covered up and blocking their view of what lay beyond.

But what they didn't do was test the mirror, as chimps will, by making motions in front of it to see if the reflection followed suit. Nor is it clear that they responded differently when they were marked than when they were not; they did sometimes scrape the marked area with a foreleg, but it wasn't obvious that they did so any more often than might be expected by coincidence. That's largely because only four horses were used in the experiment, and, if they were reacting to the reflection, they didn't do it consistently enough for this to be apparent.

So, while it's possible they didn't absolutely fail the test, we can certainly say that they didn't pass it. But even if this were confirmed in larger trials, would this prove that horses aren't self-aware to that degree?

Not necessarily. It seems hard to argue that an animal that "passes" the test doesn't know what it's doing, and at least some alternative explanations for the behaviour have been ruled out in chimps. But the reverse doesn't necessarily follow, because even if an animal does recognise its own reflection, it might not react in the way we expect it to.

The classic example here is with respect to gorillas. Since chimps, bonobos, and orang-utans can all pass the test, we'd reasonably expect that gorillas should be able to as well, but the reports of initial trials suggested that they couldn't. However, it has been suggested that this might be a social thing, since gorillas don't like making eye contact, and so perhaps don't look at the reflection for long enough, or in enough detail, to work out what it is. Or perhaps they don't care. Indeed, some more recent studies have suggested that, under the right conditions, at least some of them can pass the test, so that at least some room for doubt remains.

But even if we assume that a larger trial will confirm the preliminary study and show that, like most animals, horses cannot recognise their own reflection this is, as I noted at the start, just a matter of degree. It doesn't mean that they have no self-awareness at all, just that, so far as our testing paradigms can determine, they don't have as much of it as chimps. Or perhaps that their reactions are just too non-human for us to interpret.

It is also, perhaps, worth noting that human beings can't pass the test until they're about eighteen months old...

[Photo by "Waugsberg", from Wikimedia Commons.]
Posted by JK Revell at 14:15