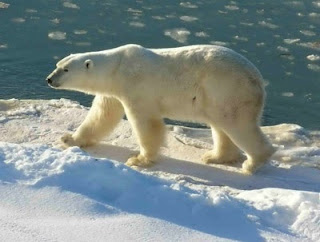 Bears are generally omnivorous animals, and will eat pretty much whatever is available. Although they look fairly fearsome, and do, of course, eat meat, they also consume a relatively large amount of plant material, such as berries, leaves, grass, nuts, and so on. This is useful, especially for a large animal, since they are unlikely to go very hungry for long, and plants are always more readily available than animals.

The polar bear (Ursus maritimus) is, of course, an exception. Unlike all other living bears, they feed exclusively on meat, and really don't eat plants at all. They are, to use the technical term, hypercarnivores, more similar in this respect to cats than they are to their own relatives. Nor do the differences end there. Most obviously, they are adapted to bitterly cold environments, and, indeed, they soon get heat stroke if taken to places that most other bears would be perfectly happy - anything much above 10°C (50°F) makes them uncomfortable. Not only that, but they are also much better swimmers than other bears, and have claws that grip into the ice when they walk.

Given these differences, you might think that polar bears represent an early branch from the lineage that led to all the other bears, one that adapted itself to both an extreme environment and a (for bears) unusual diet. But that turns out not to be the case, with polar bears having diverged from their closest living relatives, the brown bears, long after that line split from the other species.


Rather more surprising, perhaps, is just how recently this happened. Genetic analyses show that the first polar bears evolved no more than 0.7 million years ago, which really isn't very long in evolutionary terms - in contrast, most other species of bear diverged around 5 million years ago. In fact, its quite probably a lot less than 0.7 million years. The oldest known skeleton of a polar bear is only around 130,000 years old, which is sufficiently young to retain a good deal of DNA.When that DNA was analysed earlier this year, it seemed to show that the animal in question was so incredibly close to brown bears that it probably lived at around the time that the two diverged, and would therefore have been one of the first members of its species - a rare find, indeed.

What this means is that, after they first evolved, polar bears must have undergone a very rapid sequence of changes, quickly adapting themselves to their environment and new diet. Judging from the shape of their skulls, they must have changed at least twice as quickly as any other bear species did, and that's probably an underestimate.

How has the polar bear managed to adapt to a new diet in such a short time? Generally speaking, hypercarnivores such as lions tend to have strong skulls with powerful jaw muscles and large shearing teeth, suitable for slicing through tough meat and bone. This is much less true of bears, adapted as they are (in most cases) to a more omnivorous diet. But, compared with brown bears, polar bears have a long, rather sleek skull, which is even weaker than the heavy rounded skulls of their relatives. This is probably, at least in part, to make it easier for them to nuzzle through holes in the ice to catch seals.

Some recent stress analyses using the sort of computer models normally used in engineering design have shown that while the jaw muscles of polar bears are just as strong as those of normal bears, the skull itself is less able to take up the strain of a powerful bite. Granted, that's assuming the computer models are right, but even so, it does seem a bit odd. Similarly, while they do have less premolar teeth than many other bears (a feature they share with cats, for example), the teeth overall seem somewhat weaker than one would expect for a purely carnivorous animal.

One reason may be what the polar bears are eating. Their diet consists almost entirely of seals, which, unlike the antelopes eaten by lions, have a lot of soft blubber. If their food is less tough than the meat favoured by other hypercarnivores, they don't need such strong jaws, and the evolutionary change required to adapt to that diet may be less than it first appears. It may also help that, while animals like leopards and wolves regularly take down prey  larger than themselves, polar bears obviously don't. Seals just don't get that big!

There is, however, a clear downside to this rapid evolution and specialisation. As ice sheets melt, the habitat of polar bears is shrinking. But what's bad for them can be quite good for their relatives, the brown bears. Brown bears (Ursus arctos) are a diverse species, including both the grizzlies and Kodiak bears of North America, and the "common" brown bears of Europe and Russia, among others. They're pretty adaptable, and can eat a wide range of food, making them at home in dense forests, open woodland, or even tundra. As the polar bears' preferred environment shrinks, brown bears can move steadily further north.

The sort of things that brown bears eat are often tougher than seal blubber, and their teeth and bites are accordingly stronger. This means that, even if polar bears were to start eating such things (which isn't, perhaps, very likely in the first place), the brown bears would still do better. Brown and polar bears are still so closely related that they can interbreed to produce hybrids, at least some of which are apparently fertile. If that continues to happen, and the brown bears muscle in on the polar bear's territory, out-competing them for food, then it's the browns that will eventually win out, diluting the purebred polars into non-existence.

As if the great white bears of the north didn't have enough problems to be going on with...

[Picture from Wikimedia Commons]
Posted by JK Revell at 11:54