Some time ago Irregular Webcomic ran, as one of its occasional polls the question "What do you consider the defining characteristic of a carnivorous animal?" Most of the answers, as you might suppose, centred around the extent to which the animal ate meat. But almost 10% of respondents replied "a member of the order Carnivora."

Now, this has to be interpreted in the context of an earlier poll which, in a game of twenty questions, asked whether the subject of the game was carnivorous or not, it having already been established that the animal was mammalian. If people were interpreting the later question in light of that, rather than answering the actual question as written, we might suppose that they were mentally ruling out anything non-mammalian. Otherwise 10% of IWC readers must think that, for example, crocodiles and sharks are not carnivorous. Which seems a bit unlikely.

Now, in the ecological sense, a carnivore is really any animal that eats other animals. That includes two huge groups within the mammals, namely the bats and shrews. (Although not all bats eat insects - there are plenty of fruit bats and flower bats). For the sake of simplicity, though, let's assume that we refer only to relatively big scary creatures that eat the flesh of other vertebrates. Some people, after all, might not consider insects to be "meat", even if they obviously aren't a vegetarian option, either. So, no bats, shrews, or hedgehogs, among others.

So, if we rephrase the question as "what do you consider the defining characteristic of a carnivorous (meat-eating) mammal?" does the answer "a member of the order Carnivora" make any more sense?

In the Linnean system of classification, on which most modern attempts at grouping animals together are based, an "order" is the next main level down below "class". Mammals, taken as a whole, are a class, and this class is divided into, according to the most common current scheme, 29 living orders. One of the larger orders is the Carnivora, the group to which most carnivorous mammals belong.

The operative word being "most". Because, ignoring extinct animals for the moment, there are at least two other orders containing animals that are fairly obviously carnivorous. One of these contains the carnivorous marsupials. Now, most of these are small animals such as dunnarts, which mainly eat insects and other small invertebrates. But the group does include the quolls, which are about the size of a cat and have a similar diet, and, more famously, the Tasmanian devil. The evolution of this group in some ways parallels that of the Carnivora among the placental mammals, the various species having evolved to fit a similar niche in the Australian ecosystem.

The second group of carnivorous, but not Carnivoran, mammals are the whales. Obviously, some of these eat small invertebrates such as krill, or even really big ones like squid, but most do consume the flesh of other vertebrates. Fish, mostly, of course, but consider the killer whale, which is happy to eat seals.

What of the Carnivora themselves? In terms of the number of living species, they are the fifth largest of the mammalian orders, yet clearly outnumbered by the many mammals that are either mainly vegetarian or insect-eating. This makes sense, since plants are everywhere and are generally easier to catch than animals. Since no animal can ever extract 100% of the energy from whatever its eating (short of some kind of nuclear reactor in its stomach), there will always be less herbivores than plants, and less carnivores than herbivores.

The Carnivorans are considered an order because they all descended from one common ancestor, one they didn't share with the killer whales and Tasmanian devils. The defining feature of the order, despite the name, isn't what they eat, but the shape of their teeth. 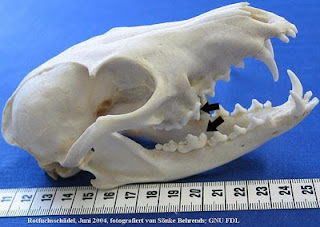 Take a look at this picture of a fox's skull. We can see a number of features that suggest this is a carnivorous animal. The teeth are large and sharp, especially the long canine teeth. There is also a thin crest of bone at the back of the skull; this is the saggital crest, and the jaw muscles are attached to either side of it. The relatively large size of the crest suggests that the jaw muscles are big, and able to create a powerful bite.

But neither of these features are specific to the order. Instead, the key feature is the one highlighted by the two arrows. These are called carnassial teeth, and, as you can see, they are much larger than the others at the rear of the mouth. They cut together like a pair of shears, slicing through tough meat and breaking bone. Other carnivorous mammals, such as Tasmanian devils, don't have these distinctive teeth, so their presence can reliably tell us whether we're looking at the skull of a Carnivoran or not.

Early on in their evolutionary history, the Carnivorans divided into two main lineages, which we can call, roughly speaking, the cat-like and dog-like carnivores. The cat-like carnivores include, among others, the cat family, which are perhaps the most truly carnivorous of all land mammals, the mongoose family, and the hyena family. The last may little surprising, since hyenas obviously look like dogs, but it had long been suspected they were closer to cats based on the structure of the skull around their ears, and more modern genetic analysis has shown that they are, indeed, more related to cats than to dogs. The dog-like shape is simply a convenient shape for a hunter, and the longer snout means that they can fit more bone-cracking teeth into the jaw.

The dog-like carnivores are, in many cases, rather less carnivorous. The dog family itself is pretty dedicated to eating meat (although not so much as cats), but the group also includes both the bear family and the raccoon family, both of which contain many species that are largely omnivorous, and can do without meat if they must. Indeed one species, the giant panda, although it can eat meat, feeds almost entirely on bamboo. It used to be thought, incidentally, that the giant panda might be a really odd-looking raccoon, but we now know that it really is just what it looks like - a bear.

The dog-like carnivores also include the weasel family, which is remarkably diverse, including such animals as badgers and wolverines along with the more obviously weasely ones. But it also includes a number of aquatic families. Until about the 1990s, the seal family and its relatives were considered to form their own order. After all, they do look quite different from the land-dwelling Carnivorans, just for a start because they have flippers instead of legs. But as the rule came to be accepted that any proper group of animals has to contain a single ancestor and all of its descendants, it became obvious, that, since seals are clearly descended from the Carnivora, either they were themselves dog-like carnivores, or the Carnivora was going to have to be split into two or more. In this case, it was the first option that won out.

There are differences between the skulls of seals and animals such as dogs - for example, the nostrils are set much further back on the top of the snout to make it easier to breathe while surfacing. But otherwise, they do have many of the same features, and its obvious that they are related.

Digging back into the mists of time to look at mammals that are long extinct, we find that, while most mammals have always been either omnivores, insectivores, or herbivores, the evolution of relatively pure carnivores has happened more than once. The group that included Hyaenodon, for example, consisted of some pretty fierce flesh-eaters. They did, in fact, have carnassials, but they were in a different part of the mouth than in true Carnivorans and, while they are related, they aren't the same. And there are many other examples, too, often found among groups that aren't generally carnivorous. A recent report in the Journal of Vertebrate Palaeontology, for example, described the fossil of what appeared to be a mainly carnivorous bandicoot - a group that are normally much more omnivorous.

Flesh-eating is a useful adaptation. The food is scarcer and more difficult to acquire, and it takes much more land area to support a carnivore than a herbivore of the same size (because whatever the carnivore is eating needs room for its own food as well). But, so long as you don't have too many competitors, the food is quite nutritious and its much easier to digest than most plants. Its useful enough that its evolved more than once, and so not all carnivorous mammals are necessarily members of the order Carnivora. Indeed, as the existence of the giant panda shows, not all Carnivorans are necessarily carnivorous.

Indeed, that carnivorous animal in the twenty questions game turns out to be either a bear or a weasel, which means that there could be a 50/50 chance its actually an omnivore. Possibly even one that subsists primarily on marmalade sandwiches...

[Picture adapted from one at Wikimedia Commons. Modified version freely available under the terms of the Creative Commons 3.0 license]
Posted by JK Revell at 14:49