Endangered Cats of the High Andes 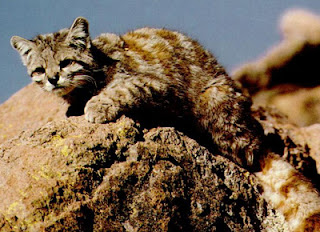 A few weeks ago in the UK, we had the 10-yearly treat of filling in our national census forms. Once all the information from these forms is collected, we will have an official figure for the number of humans living in our country. Unfortunately, finding out the same figure for wild animals isn't quite so easy. Yet studying the population densities and numbers of wild animals is often of more than academic interest. A great many species are endangered, and without accurate ideas of how many of them are, we can't tell how endangered they might be, what strategies we might have to use to protect them, and whether or not those strategies are working.

Of course, animals can't fill in census forms, but there's more to it than that. If the animal lives in large, highly visible herds, it may not be so difficult - although even there, you have to be sure you're not counting the same animal twice, and that you're picking a suitably representative area to study (since, realistically, you're not going to go out there and do a head count of every such animal in existence). But many animals aren't so obliging. They may be small, they may actively hide from humans, they may be nocturnal or crepuscular, or they may just live somewhere its hard to get to, or in a jungle so full of plants its hard to spot anything. The rarer they are, the harder it becomes to find them, and yet those are exactly the ones we're most interested in.

Tigers and snow leopards are dramatic and beautiful animals, and their rarity makes them an obvious target for spending on conservation. In comparison, the effort spent on the many species of smaller cats is considerably less, probably because most people aren't so aware that they even exist. The Andean mountain cat (Leopardus jacobita), for example, is officially classified as an endangered species, putting it in exactly the same category as tigers and snow leopards, yet it receives far less attention, and much less is known about it.


It's a small cat, around the same size as the domestic sort, and it lives among the sparse, high altitude scrubland of the Andean mountains. That, in itself, makes it very difficult to study, and for a long time, we really didn't know how rare it was. In addition, like most small cats, its quite good at hiding, and doesn't like to show itself when humans are around. Not without reason; according to the International Union for the Conservation of Nature, the main threat to the animal seems to be human hunting, with its fur being used in local religious ceremonies, although the steady advance of ranching and mining operations in even this remote area is undoubtedly also a problem.

One thing we do know is that the Andean mountain cat lives in the same area as another small cat, the Pantanal cat. Officially, this is classified as "Near Threatened", which, while obviously not ideal, isn't as bad as being endangered. However, there's some argument over that, because its not clear whether the Pantanal cat is a subspecies of the Pampas cat (Leopardus colocolo), or is a species in its own right (L. braccatus), in which case its probably rarer than we think (I've mentioned this sort of problem before). Either way, what we can say is that, in areas where both cats are found together, we see a lot more Pantanal cats than we see Andean mountain cats.

But perhaps the mountain cats are better at hiding, or prefer even more inaccessible landscape than the Pantanals. A recently published study by Argentinian researcher Juan Reppucci and colleagues tried to come up with better population estimates than the few we already had, in order to determine just how endangered the animal is. The result, sadly, wasn't good news.

So, how do you count small cats trying to hide from you in the vast and rugged terrain of the high Andes? The study region lies in the Altiplano of Jujuy Province, a mix of high plateaus and soaring mountain peaks, although not entirely devoid of human activity. To find their cats, they set up hidden cameras, triggered by the passage of animals, in locations where they had found dung or other signs of the animals' presence.

One question that immediately arises is how many cameras you use, and how far apart you put them. You can't have them everywhere, but if they're too far apart, then there might be cats wandering about in the gaps between them that never come across a camera. Animals tend to have a home range - an area through which they habitually travel - so your cameras have to be closer together than that, to catch all of them on film. We honestly don't know what the home range of Andean mountain cats is, so the best that could be done here was to guess that it's probably no smaller than that of other cats of similar size. Given how little there is to eat in such an environment, compared to that of most other cats, that's likely a fair assumption, because, if anything, the home range ought to be a lot bigger. On the other hand, one advantage that the cats do have is that its possible to tell individuals apart by their coat patterns, so at least you shouldn't be counting the same animal twice.

Over two three-month periods, they obtained a total of 25 photographs of Andean mountain cats (incidentally, according to Conservation International, prior to 1998, there were only two photographs of the living animal in existence anywhere, so this in itself is no mean feat). But nothing's perfect, so how often do the cats just not set off the cameras? The authors of the study used a fairly complicated mathematical formula to work that out, but the answer came out to a detection rate of just 7%, which is still a lot higher than the 2% previously calculated for the Pantanal cat.

And that's where the bad news comes in, because, if it's right, it means that mountain cats are much easier to spot than Pantanal cats (although still, it has to be said, not all that easy). But we already know, and this study confirmed, that we see a lot more Pantanal cats in the high Andes than we seen mountain cats. Which means that the Andean mountain cat is even rarer and more endangered than we thought it was - and that was already pretty bad.

In fact, the population density they calculated for the Andean mountain cat was around one animal per ten square kilometres, about an eighth that of the Pantanal cat in the same area. It's also incredibly low compared to other related species, such as ocelots. As expected, by the way, both cats seem to have enormous home ranges, about six kilometres across, compared with one and a half kilometres for, for example, the Scottish wildcat. But why is the population density so low when, if anything, we might expect the mountain cats to be better adapted to living in, well, mountains, than a related species that commonly lives elsewhere?

Of course, its hard to tell how typical the study area is, but without any reason to suppose its special, one reason may be what the cats eat. The very fact that the Pantanal cat can live in a wider range of habitats may mean that it eats pretty much whatever small animals it can find. In contrast, there is good evidence that Andean mountain cats are specialists, and that they feed almost exclusively on mountain viscachas (a sort of rabbit-like rodent). There is also some evidence, incidentally, that they used to eat wild chinchillas as well, but, unfortunately, these animals are now even more endangered than the cats are, and at severe risk of extinction. Now, viscachas are not rare animals, but even so, if there's only one thing you know how to catch and eat, inevitably you will end up rarer than neighbouring animals that can eat pretty much what they like.

We already knew that the Andean mountain cat was one of the rarest and most endangered wild cats, but now it seems that it may be even rarer than we thought. It lives in the same sort of environment as the much larger and more glamorous snow leopards of Asia, and is, roughly speaking, just as endangered as they are... but we all know which is the one that everyone's heard of.