The single most successful group of these long-gone herbivores were the notoungulates. We know of over a hundred species of notoungulate, in multiple different families and they were once as important in South America as antelopes are in Africa. They were, for the most part, hoofed animals, although quite unrelated to the hoofed animals we have today (and some did, in fact, have claws, instead). Like horses, and unlike cattle, they placed most of their weight on the enlarged middle toe of each foot. However, unlike horses, they never entirely lost all of the other toes, and most had three hooves on each foot.

Some older books, incidentally, will tell you that the notoungulates briefly succeeded where most of their neighbours failed, and managed to spread into North America, and even as far as China, before finally dying out. We used to think that was the case, but it turns out that the fossils in questions were victims of mistaken identity, and that, while at least one species did make it as far as Central America, there is no evidence that they ever got any further.

The notoungulates can be divided into three broad groups; the primitive notioprogonians, the giant toxodonts, and the typotheres. Where the toxodonts took on a role not dissimilar to that of the antelopes and rhinos elsewhere, the typotheres evolved to fill a different, but equally vacant, herbivorous niche - they came to resemble rodents.

They were generally larger than rodents, though  - most were at least rabbit or cat-sized, and a few reached the size of pigs. The early notoungulates had the full set of 44 teeth found in all the earliest placental mammals, albeit adapted for their herbivorous diet. The typotheres, however, eventually lost the canine teeth, and reduced the incisors to a single large, chiselling pair at the front of the mouth, separated by a gap from the chewing cheek teeth further back. This is the same pattern we see in rodents, and suggests that they had a similar diet. One group even had exceptionally long hind legs, suggesting that they may have leapt about like rabbits (rabbits are not rodents, of course, but they have a similar lifestyle).

We can also tell that they probably had very acute hearing. This is because one of the most distinctive features of their fossils is the presence of a greatly enlarged ear region in the skull, with an additional cavity in the bone and a detailed structure not found in other animals.

A new species of typothere has recently been described by Daniel García López and Jaime Powell of the National University of Tucumán in Argentina. The fossil includes an unusually complete skull, which is about 7 cm long, suggesting a fairly small animal of its kind. It dates from the middle of the Eocene, the second and longest epoch of the Age of Mammals, a time before many modern groups of mammal had evolved, and long before the two American continents joined up. The skull is rounded, with a short snout and large eye sockets. 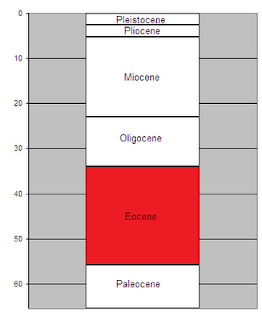 As might be expected, given the age, the new species is a relatively primitive member of its group. Of course, the term "primitive" isn't really a very good one, and the animal would doubtless have been well adapted to doing whatever it did in its native habitat. What it means here is that the animal had changed relatively little from its ancestors, still keeping many of the features that they had had, rather than those that would be developed later on.

For example, it still has the full set of teeth, including the canines and the second and third incisors that are absent in some more advanced forms, although the first pair of incisors do already have the chisel-like shape that makes them resemble those of rodents - those in the upper jaw are also larger than the other incisors. From this, we can infer that the animal was already developing the diet and habits that would be shared by later forms, which is how we know it's a typothere at all.

The overall range of features in the skull is somewhat odd; they present a mixture that makes it impossible to assign the fossil to any of the four or five known families of typothere. That's not unusual when you have an incomplete or damaged fossil, as often happens - you might have enough to say that your animal is a new one, but still be missing some of the crucial bits needed to work out what it was most closely related to. That's not the case here - we do have the relevant pieces, they're not just not telling us a consistent story, based on what we already know. As a result, the animal was christened Griphotherion peiranoi; the first part of the name meaning something like "puzzling beast".

The most likely explanation is that Griphotherion is a genuinely primitive form. It might not literally be the ancestor of later typotheres, but it's at least closely related to whatever was. Later on, in the Oligocene, the descendants of such animals began to branch into the many forms of typothere that populated the continent, from the heavily-built Mesotherium (shown in the picture above), to the rabbit-like Hegetotherium and the coney-like Archaeohyrax. It thus represents a "bridge" between the genuinely primitive forms, and those that more closely resembled rodents and rabbits.

Due to the presence of a range of other primitive and early notoungulates in the same area, the authors argue that north-western Argentina may be the origin point in which the first members of this once important group of animals began to diversify into their many later forms. That may, perhaps, be narrowing it down a little, for one suspects that, even in the Eocene, they must have travelled across a reasonable chunk of the continent, but it does seem to be the case that these fossil deposits have a lot to tell us about the beginnings of a parallel path in the evolution of large mammalian herbivores, an equally viable alternative to the ungulates that we still have today.

[Picture from Wikimedia Commons]
Posted by JK Revell at 13:49