What Fur Seals do at Sea 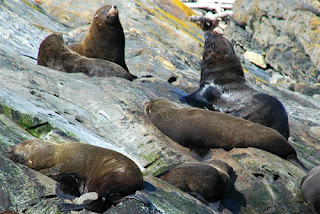 I seem to have done quite a few posts on cetaceans over the last few months, and have discussed, among other things, the difficulty of finding out what they're up to, compared with land animals. But, of course, whales and dolphins are not the only fully marine mammals. There are, in fact, four groups of such mammals, with the second largest, after the cetaceans, being the pinnipeds - seals and their relatives.

Seals differ from whales and dolphins in that, while they spend almost their entire lives at sea, they still have to come onshore to breed and give birth. Mammals have an advantage over birds, and most reptiles, in that they don't lay eggs, which would drown if you tried to lay them underwater, but it's still quite difficult for newborn, air-breathing, young to immediately take to swimming. Whales and dolphins have mastered this evolutionary trick (as have sea snakes, for that matter), but seals have yet to do so. Give them a few more million years, perhaps.


However, when they're on land, in their breeding colonies, seals are relatively easy to observe, and a lot of what we know about their habits concerns that time of the year when they're busy mating and giving birth. But this, of course, is something they do for only a few weeks each year. What are they doing the rest of the time?

The South American fur seal (Arctocephalus australis) belongs to the same family as the sea lions, rather than that of most other seals. The primary distinction between these two families is the shape of the legs. While their feet are flipper shaped, the legs of fur seals and sea lions are still capable of walking, allowing them to at least waddle on land, rather than just flopping about. The downside of that is that their hind legs are less useful for swimming, so that they propel themselves through the water mainly with their fore-flippers, unlike the "true" or "earless" seals, which can make more effective use of their whole bodies.

The relationship between fur seals and sea lions is rather more complicated than the above implies. For example, the sea lions are not a single group of animals, but rather a collection of members of the "eared" seal family that aren't fur seals. Most notably, the sole northern hemisphere species of fur seal is unrelated to its southern namesakes, and represents an even older evolutionary branch than the lowest one on this chart.

South American fur seals live off the coast of South America, south of the tropics, along both the Atlantic and Pacific coasts. They are capable of travelling some distance out to sea, and evidently finding food there, but they generally prefer shallower waters close to the coast. Nonetheless, they avoid the coast itself, and only come ashore to breed. Even then, they prefer offshore islands rather than the mainland coast, presumably because they get less disturbance there.

Mariela Dassis and co-workers, of the University of Mar del Plata, watched the local fur seals to see how they used the nearby coastal waters. This particular population of fur seals breeds further north, on islands off the coast of Uruguay, but, between May and December they head south and frequent a cluster of rocky reefs close by the University's location. The reefs obviously offer them some protection that the main shoreline doesn't, whether it's shelter from the weather or just avoiding pesky humans, since only small boats can navigate the reefs, and then, only in good conditions. On the other hand, the reefs are pretty steep, making it difficult for the seals to pull themselves up onto ledges, and forcing most of them to spend their entire time swimming, just as they would do if they were further out at sea. But, with the closest reef only a few hundred metres offshore, it's quite possible for researchers to watch what they're up to by simply standing on the nearest headland with a pair of binoculars.

Unlike whales, while seals can hold their breath for longer than humans, they cannot do so for hours at a time. The  fur seals in this colony seemed to spend relatively little time feeding, something that's generally true of carnivores. For the most part, they stayed very close to the reefs, exploring an area of only four square kilometres (1.5 square miles), and spending half their time in an even tinier area at the heart of that. This behaviour is fairly typical for most mammals on land, and, in this case, is likely to be associated with where their food of mackerel and other shallow-water fish was most concentrated. Indeed, while they certainly can eat deeper water fish (such as anchovies), these particular fur seals chose not to venture into water deeper than about ten metres (30 feet), evidently preferring the rocky shallows.

If they spend little time feeding or diving, what do they do all day? In fair weather, the answer seems to be mainly laying about on their backs with their flippers in the air, something they could quite happily do for hours at a time. Very occasionally, some of the larger males would haul themselves out onto a rock, but for the most part generally lazing about in the water seems to be their preferred activity when they aren't hungry. It's doubtless a good way od saving energy, and perhaps of letting their dinner settle.

While choppy seas didn't entirely convince them to stop lazing about, when the weather got breezy, they did spend more time with their heads just below the water, or actively swimming in a particular direction, perhaps to stop being washed about by wind-driven surface currents. Some of this time they may have spent looking for food, but its notable that they tried to use the reefs for shelter, staying out of the worst of the weather. Being battered about by surface waves is presumably quite exhausting, and, since they do need to breathe every now and then, staying just below the surface may be the most comfortable place to be. (We don't, incidentally, know what they did when real gales sprung up, since nobody could see them through the spray when the weather got that bad).

Factors such as the direction of surface currents also affected where the fur seals chose to spend their day, which all helps to build up a picture of how the animals interact with their ever-changing environment. That they prefer to spend their time in specific areas, for example, rather than wandering willy-nilly over the empty expanse of the sea, may have relevance for their conservation. Not, it has to be said, that South American fur seals are in any real danger, but some of their close relatives are, and an understanding of what they're doing - and, crucially, where they're doing it - when they aren't breeding can help prevent things getting any worse.

To us, the sea may look fairly similar everywhere, but to fur seals, its evidently more complicated.