For much of the twentieth century, we thought that there was just one kind of goral, albeit with a number of subspecies. Since then, our increasing knowledge (and, perhaps, changes in approach among those people who name such things) has raised many of these to full species status. If you've read my earlier posts on caprines, it probably won't surprise you to discover that it isn't clear exactly how many new species we're talking about here. It's at least four, and maybe five or six.

Retired army officer Thomas Hardwicke was the first person to scientifically describe a goral, in 1825. At the time it was just "the goral", because there weren't known to be any others. However, he identified it as coming from Nepal, where he had performed some of his military service, so it's the species of goral found in that country that retains his original scientific name. We now call it the Himalayan goral (Naemorhedus goral). 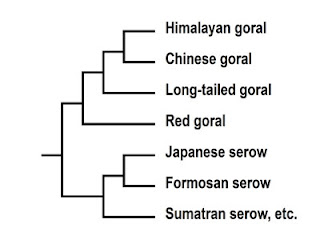 Because it might be the "grey goral". Or the "brown goral", just to be confusing. Or it could just be the "common goral", given that it's the first one. Even the scientific name isn't entirely clear. Hardwicke described it as a kind of antelope, but another ex-army officer and naturalist, Charles Hamilton Smith, correctly placed it in its own genus, Naemorhedus. Unfortunately, judging from the Latin, that probably wasn't what he meant to write - he'd intended to say "Nemorhaedus", which means "little goat from the grove", rather than what he did write, which doesn't mean anything. Officially, once he'd written and published it, he couldn't take it back, so his spelling remains the correct one. But you'll often see the amended version, even in reliable sources.

Gorals are the smallest living caprines, typically standing between 60 and 70 cm (23 to 27 inches) at the shoulder. The Himalayan varies from grey to greyish-brown, with a pale patch on the throat. Older males have a crest of longer hair on the back of the neck, as serows do, although this is far less noticeable than it is in their relatives. They live throughout the Himalayas, from Sikkim in the east to Pakistan in the west, although the animals living west of the Sutlej River in the Punjab are noticeably greyer. They are at least a distinct subspecies from their more numerous kin to the east, and may even be a different species. If they are, then we can at least stop using the terms "grey goral" and "brown goral" to refer to the same animal...

Himalayan gorals inhabit forested, rocky terrain up to as high as 4,000 metres (13,000 feet) elevation, and seem uncomfortable on slopes of less than about 30°. They are never far from suitably dramatic cliffs into which to escape at the first sign of danger, making a sort of hissing, sneezing alarm call as they do so. As their slender bodies and limbs imply, they are remarkably nimble, and they can apparently move at quite some speed when they have to.

They mainly eat grass, and some shrubs, but will eat fruits and nuts when they are in season. They tend to avoid direct sunlight, preferring the north-facing slopes of mountains, and, even then, using the northwestern slopes in the morning, and the northeastern ones in the evening. In between, when the sun is at its highest, they tend to snooze, and they may sometimes even be active at night. Their greyish/brownish coats are good camouflage against the rocks, especially when the light is dim, making them hard to find.

Like other "resource defenders", gorals cannot afford to live in large herds. The males are usually solitary, and even around a quarter of the females apparently live on their own. Even those that don't live in all-female groups of just two or three individuals, or mixed sex herds that rarely have more than about five members. Breeding takes place from October to December, and results in the birth of a single kid six months later.

In all honesty, the other species of goral aren't that different, which is why it took so long to identify them as such. The Chinese goral (Naemorhedus griseus) is particularly similar. It lives in hilly and mountainous regions of central and southern China, and in northern Myanmar and Thailand, and in much the same environments as its Himalayan kin. They are noted, as their scientific name suggests, for being a particularly slate grey colour, with a white throat patch. However, again, the southern forms are noticeably browner, and these "Burmese gorals" are at least a subspecies and, again, possibly a full species in their own right.

Chinese and Burmese gorals have been little studied, but there has been more work done on the long-tailed goral (Naemorhedus caudatus), which, confusingly, is sometimes also called a "Chinese goral". They live, however, only in the most northern parts of China, notably in eastern Inner Mongolia, as well as in the east of the Korean Peninsula, and in parts of the Russian Far East. In reality, the tail is only marginally longer than in the Chinese and Himalayan gorals, and that's easily accounted for by the fact that the animal, as a whole, is slightly larger. However, the tail does have long, black hairs on it, that give the illusion of it being much longer than it actually is - something not seen in the other species.

Although they also inhabit mountainous forested slopes, long-tailed gorals are notable for venturing down into lower altitudes than any of their relatives. Indeed, on the windswept coasts of eastern Russia, they are found at the top of high sea cliffs, just a few hundred feet above the waves. Other than that, and the fact that their pregnancy apparently lasts for seven months, rather than six, most of the studies that have been performed show that they aren't really any different to other gorals.

Living in an area roughly between the other three species, the red goral (Naemorhedus baileyi) is the most distinctive of the gorals. Apart from their vibrant russet coats, they are also smaller than any of their kin, and thus, the smallest of all caprines, with even the largest adults weighing no more than 30 kg (66 pounds). They live in the mountainous regions of southern China between Tibet and Yunnan, and in the extreme north of neighbouring parts of India and Myanmar. Being found at elevations between 2,500 and 4,500 metres (8,200 to 14,800 feet), they inhabit higher terrain than any other goral, and apparently feed as much on lichen as they do on grass.

Their bright coats may indicate less of a concern with being spotted by predators in their remote homeland, and they also seem to actively seek out sunny spots, rather than remaining in the shadow as their kin do. Males are solitary, and females don't form groups of more than three, perhaps because good resources are limited where they live. The area they defend is only about 40 hectares (100 acres), relatively small compared with similar species.

Their mating habits have also been studied, and its clear that the males actively defend territories and call to females to attract them over distances of up to 500 m (550 yards). The females answer in return, and then either headbutt the males if they aren't interested, or mate ten to twenty times over a short period, if they are. As with most other gorals, pregnancy lasts six months, and results in the birth of a single kid. They live for up to fifteen years in captivity.

The Himalayan goral is the only species of the four not be considered "threatened", and even that has a declining population. Hunting seems to be the main threat to gorals, although habitat loss to farming or forestry may be having some effect too - fortunately, though, most live in places that farmers just don't want.