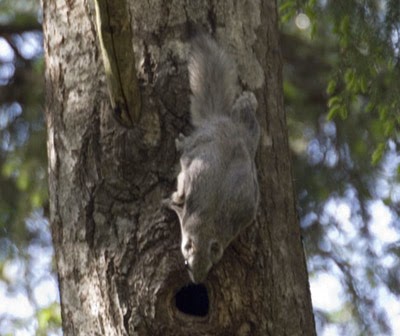 In general, among mammals, males are larger than females. We can see this in our own species: on average, men are taller than women, and, again on average, they also tend to have more muscles and a greater overall body mass. Compared with some other species, though, the difference isn't all that great. Seals are an extreme example, with males often many times larger than females. But, in many cases, the difference is more like that with us: it's a noticeable difference, but not a dramatic one.

The reason for this is generally thought to be male-male competition. Males often have to compete for mates, and the bigger you are, the more likely you are to win that contest. It doesn't even have to be physical; the mere fact that you've been able to 'waste' calories on bulking yourself up proves that you're physically fit, and therefore an attractive mate for females. Even the fact that you've survived long enough to grow to large size is a point in your favour.

How this manifests will depend a lot on the mating system of the species concerned. In species that are monogamous, it's not such a big deal, and it's even less so if females are highly promiscuous. It's most noticeable in polygynous species, where one male monopolises as many females as he can, perhaps defending a harem from all comers. This is what happens in seals, and it's also true, for example in deer. Stags, for instance, not only are quite a bit larger than hinds, but they have huge antlers that not only let them fight off their rivals, but also further demonstrate how many calories they've been able to waste growing something huge just for the heck of it.


There are, of course, downsides to being large. For one thing, you do have to waste those calories - you're not lying about that part. When you consider that the males of rutting animals often spend so much of the breeding season either mating or driving off rivals that they haven't got much time left to do things like eat, this is no mean feat. There can be other disadvantages, too, such as making you obvious to predators, or making some aspects of your lifestyle more difficult.

But, apparently, it's usually worth it, to at least some degree. Which is why, in most mammal species, the males are larger, and where they aren't, there's usually little difference. But not always.

Because there are species where the female is larger. Not often by much, in the case of mammals, but it does happen. So what's going on in these species?

Well, for one thing, there are advantages to females being larger, too. By and large, bigger females have more reproductive success, having more children, and being more likely to raise them to the point of independence. But that ought to be true of pretty well all mammals, and it's obviously the case that, in most, it's not a big a deal as the need for males to duke it out with one another. Or the males wouldn't be bigger in the first place. We might therefore expect that, in species where it's the female that's large and muscular, something different is going on. And it probably involves the mating system.

And so Vesa Selonen and co-workers decided to look at the mating habits of one such species. The species in question is the Siberian flying squirrel (Pteromys volans). The squirrel family is a large one, with almost 300 species, and includes both tree-dwelling and ground-dwelling forms, although the former are more numerous. The flying squirrels form their own group within the family, and there are about 40 different species, almost all of which live in Asia. They don't really fly, of course, but instead just glide from tree to tree using an outstretched furry membrane between their legs.

The Siberian flying squirrel is found across northern Eurasia from Finland to far eastern Siberia, and is the only flying squirrel to be found in Europe. They live in cold northern spruce forests with a good mix of tree types. They're nocturnal, and sleep through the day in cavities in aspen trees - often those abandoned by woodpeckers - but eat mainly leaves and catkins from alder and birch. As with many tree-dwelling squirrels, they aren't especially sociable, and don't share their nests with others of their kind.

They're about the same size as the northern flying squirrels (Glaucomys sabrinus) of Canada and the northern US, and therefore about twice the size of the southern species found throughout the eastern half of the latter country. As flying squirrels go, they aren't especially close relatives of their American cousins, although they're certainly closer to them than they are to, say, red squirrels. For our purposes, though, what's relevant is that the females are about 5% heavier than the males. Which is not a lot, perhaps, but is enough to be significant.

The first thing the researchers looked at was how the squirrels were spread out through the forest, and how they interacted. Females, it turns out, stay relatively close to their sleeping shelters, and live sufficiently far apart that they rarely meet one another. Males, on the other hand, travel much further, and must regularly come into contact, not only with each other, but, perhaps more importantly, with females.

This sort of pattern is very common among mammals, especially where they have key resources to defend. Significantly, the male flying squirrels travel further during the March to May breeding season than they do at other times, allowing them to make the acquaintance of more potential partners. Within the breeding season, the females only seem to come into heat for quite brief periods, perhaps of a day or so at a time, meaning that the males have to make the most of the time available.

For example, they frequently sleep with a female in her den for a few days before she comes into heat - presumably ensuring nobody else gets a chance with her - and then leave as soon as they've done the business. The female must surely have a say in this, though, given that she's bigger than he is, and must be more than capable of turfing him out if she's not interested.

That females call the shots was also apparent when the researchers conducted some paternity testing on young squirrels. Mammals are usually thought to be either monogamous (clearly not the case here), or polygynous, with one male mating with as many females as he can. But it's often not that simple, and so it proved here - the squirrels turn out to be promiscuous. (Or, if you prefer long words, "polygynandrous"). That is, both males and females have multiple sexual partners in any given breeding season.

We know, not only because the researchers witnessed it happening, but because not all the pups within a given litter always had the same father. That might sound odd from a human perspective, but it's really quite common, and is exactly what you'd expect from a litter-breeding animal where the mother has multiple partners in a short space of time.

If anything, it's less common in this species than we might expect (compared with, say, American red squirrels, where about 80% of litters have multiple fathers). Perhaps, since such squirrels are relatively rare in Finland, where the study was conducted, the females just get less opportunity, or perhaps there's some tactic we can't see. For instance, the male who gets to mate first may be able to out-compete the sperm of a later rival, or alternatively, the female might actually be able to select the best quality sperm or embryos after the fact.

In general, females had more reliable success as mothers than males did as fathers. Some males got lucky, some didn't, but females were about the same year on year, in terms of the number of young raised. And, notably, larger females had more young than smaller ones, presumably indicating a drive to greater physical fitness.

So, really, the question is, why didn't the males do the same? The mating system isn't, as it turns out, especially unusual, so they should have the same pressures, and the same need to drive off rivals as any other animal. So why don't they? Why is it okay for the females to be hunky and able to look after lots of kids, but not okay for the males also to get larger?

Well, the males do physically compete against one another, and it could be how they do it that's significant. Like many animals, competition among male Siberian flying squirrels consists of chasing. Males chase one another through the treetops, until one impresses the female enough to mate with her. Normally, you'd think that would favour larger, fitter, males.

Except... well, they chase each other by gliding from tree to tree. If you want to do that, being big might actually be a problem. Smaller, lighter, more nimble males may well be better at gliding than heavy ones who can't jump so far. If so, there's a trade-off here: smaller means better at chasing, larger means likely to have more kids. For the females, chasing isn't such a big deal (although, clearly, they don't want to be too large, since they still have to get about), so they can just be bigger and raise larger litters.

It's hardly conclusive - we'd need better studies of chasing activity for that - but it could be one reason why, in this species, females are hunkier than their slimline partners.

[Photo by Marko Schrader, from Wikimedia Commons]
Posted by JK Revell at 15:01