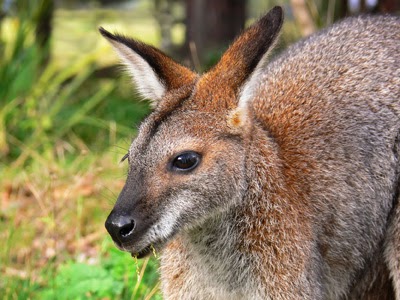 Or, at least, that's the theory. And it's a theory with plenty of backing from studies on a wide range of mammal species. If affinitive behaviour is particularly useful for defusing tension, it should be particularly common after a fight or disturbance of some kind. In effect. the animals are 'making up', re-assuring each other that it's all over, and that they don't really want to break up. This sort of behaviour has been seen in herd animals, such as goats and horses, pack animals, such as wolves and hyenas, and more besides, with primates proving especially popular. Including, unsurprisingly, us.

But there's something all of these mammal species have in common: they're placentals. There's nothing unusual in that, of course, since well over 90% of mammal species are placentals: mammals that give birth to (more or less) fully-formed young. They're a pretty wide range of animals, too, with monkeys and goats belonging to quite radically different branches of the mammalian family tree, never mind their obviously different lifestyles.

But if this really is a common principle - and its hard to see why it wouldn't be - we should be able to trace it as far back in mammalian ancestry as we wish. Ignoring the monotremes, which aren't terribly sociable, that means looking at marsupials. Until recently, though, nobody had. Perhaps it just seemed a bit obvious, but it's always worth checking these things out, if only to see what differences might exist.

When we're looking for truly herd-dwelling marsupials, we're basically looking at the kangaroo family. Although they're not the largest family of marsupials (that's the American opossums), they are undeniably a large and successful group. Essentially, they're what marsupials have instead of all those herbivorous hoofed animals that we find among placentals. Like the hoofed animals, they have a digestive system adapted to get the maximum nutrition out of vegetable matter, in their case by having a large and complex stomach that fulfils some of the functions performed by the multiple stomach chambers of cows and the like. Possibly the only reason they don't have hooves themselves is that it would be a bit difficult to climb into a pouch if they did.

But, for our purposes, the key thing is that, like antelope and all the rest, kangaroos tend to be herd animals. They, too must face similar challenges holding a herd together. A recently published study is the first to look at how (and whether) members of a marsupial species make up after a fight.

Red-necked wallabies (Macropus rufogriseus) are relatively large wallabies, and close relatives of the true kangaroos (that is, the really, really, big wallabies). They live wild in the scrubby forests of eastern Australia, and, while they don't live in permanent herds, they do often gather together in groups of up to thirty individuals, especially in the summer. Indeed, for all that their groups are somewhat fluid, early studies have shown that they seem to have a social structure not unlike those of more typical herd animals.

To perform the study, the researchers spent five hours each day, over a period of almost two months, simply watching wallabies at the Tierpark Zoo in Berlin. By the nature of zoos, the wallabies were inevitably in a social situation, but even so, it isn't enough to simply see if they act in a conciliatory manner after a fight. In order to show that the behaviour is what we think it is, and not simply our own interpretation, it's necessary to show that it actually works. In other words, it has to make future conflicts less likely, and to reduce stress.

This is, indeed, what seemed to be the case. Wallabies were more likely to be nice to one another, by grooming, licking, or even sharing food with one another, after they had been involved in a conflict of some kind. From the loser's point of view, this seemed to have the desired effect: they were less likely to be the victim of a second attack after apparently 'reconciling' with their opponent, and both animals showed less signs of stress afterwards - as witnessed by how often they scratched themselves.

It was noticeable that particularly aggressive interactions, involving biting and kicking rather than, say, simply chasing, were less likely to be followed by such peace-making. This isn't necessarily what you'd expect, although it has been seen in some other animals before. Presumably, the loser of the fight was too worried about giving his opponent another chance after he'd been hurt to take the risk that he might not have calmed down yet. It's by no means the case with all animals, though, and there are some where the hope of placating an especially angry opponent is seemingly worth the trouble.

What the researchers didn't expect was that close relatives were no more likely to make up than anyone else. Families, it seems, just aren't much valued by red-necked wallabies, possibly because of the variable and unstable groups that they live in. You'd also expect that the animal which had just lost the fight would be the one who had the most to gain by ensuring it didn't happen again. But, when they did fight, even the winners seemed a bit stressed by the event, and were just as likely to make a friendly gesture as the losers were.

Red-necked wallabies, it seems, don't much like to fight with one another, and are quick to make up when they do.