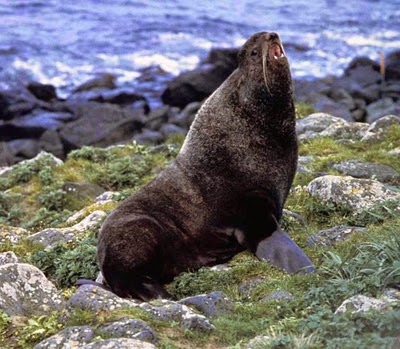 At any rate, there are some obvious physical differences between "true" seals and members of the sea lion family. For a start, there's the fact that the former don't have visible ears, having done away with them for the sake of streamlining. However, the shape of their limbs is perhaps a more obvious difference, at least on land. Sea lions and fur seals have flippers that still just about work as legs, allowing them to waddle about on all fours, if not, perhaps, with the alacrity of a gazelle. Seals, on the other hand, are so well adapted to swimming that their hind legs don't really work on land at all, and they're forced to haul themselves about with their front flippers.

Fur seals and sea lions, on the other hand, are much harder to distinguish from one another, although the former do tend to be, among other things, rather furrier. There are nine species of fur seal, eight of which form an evolutionary group, with species spread across various shallow seas between the Antarctic and southern California. The other one is the northern fur seal, which, despite the name, does not appear that closely related to its southerly namesakes.

We know, of course, where northern fur seals breed: in and around the Bering Sea between Alaska and Siberia. They do this in the summer, and we also know that, during the cold winter months, they head south, spreading out across the North Pacific from California to Korea. But there's an oddity: we also know that males and females don't spend the winter in the same parts of the ocean.

In fact, according to tradition, the sexes overwinter in completely different areas, perhaps as much as a thousand miles apart. You don't need to be a scientist to spot this, since the sexes are pretty easy to tell apart. Specifically, adult females weigh about 40 kg (90 lbs), and full-grown males weigh up to 350 kg (770 lbs). So it's hard to imagine that the traditions are wrong on this point; the question is why the fur seals are doing it.

A newly published study is the first to use satellite-linked tracking devices to follow members of both sexes at the same time, seeing how they respond to the same weather conditions, and what they get up to during the winter. The animals were tagged at their summer breeding grounds in the Pribilof Islands, a particularly remote group within the Bering Sea. Most of them headed south over a ten day period in early November, when the islands were hit by a couple of bad storms - convincing them, no doubt, that winter was truly on its way.

But, as expected, they didn't all head in the same direction. There were, unsurprisingly, some differences between individuals, since they weren't travelling together in a pack. But, in general, the females headed for the Unimak Pass, the most easterly gap of any size within the Aleutian Islands. Some of the males initially headed north, feeding there for up to two months, but all eventually headed south, with all but one choosing to leave the Bering Sea through Aleutian passes much further west than the females had.

Once out of the Bering Sea, the females headed for the west coast of America, spreading out over a huge area from southern Alaska to northern California. One of the males hugged the south coasts of the Aleutian Islands - still a long way from the females - but the others just kept going south, out into the featureless expanse of the North Pacific.

Which demonstrates, to nobody's great surprise, that they do, indeed overwinter in different areas. But to figure out why, we have to look at what they did when they got there.

The females did more or less what has been observed in previous studies of their migratory and winter behaviour. They were mainly nocturnal, diving to depths of about 30 metres (100 feet) for about two or three minutes at a time, with breaks of about the same time in between. Here, they presumably caught fish, many of which rise towards the surface at night, making them easier to catch. It was noticeable, for example, that the seals had to dive deeper when there was a full moon, when fish would not rise quite so close to the surface.

Female northern fur seals feed on fish like herring, mackerel, and pollock, and this all fits with that. But what about the males? Because they travel so far from land, this was the first study ever to look at their winter diving behaviour (although we do have studies of the equivalent behaviour among Antarctic fur seals). It turns out that it really was different from that of the females.

Essentially, they dived much deeper - down to around 75 metres (250 feet), and sometimes to almost twice that. The dives also took longer, and were conducted less frequently, than those of the females, presumably for the same reason. This is diving down to below the "mixed layer" - those parts of the surface waters that are stirred up by wind-driven currents and wave action - into the still, colder, waters that lie beneath. Doubtless they're catching something down there... but we don't know what. Squid are one possibility, but the fact is we have no studies on what male northern fur seals spend their winters eating, so it could be anything.

But whatever it is, it's probably something that isn't found in such great numbers in the shallower seas where the females spend their time. In other words, the sexes live apart outside of the breeding season because they don't eat the same food. Which, in turn, raises the question of why not.

It's likely that the males' deeper dives enable them to get more food, per trip, than the females manage. They must do, because they grow so much larger, and they have to be getting all those calories and body-building proteins from somewhere. In turn, being larger means that it's easier for them to conduct longer, deeper dives. It's a sign of physical fitness, and the bigger they are when they return from their winter feeding, the more they'll impress the ladies.

Come the summer, when the breeding season begins again and both sexes inhabit the same, shallow, parts of the Bering Sea, it doesn't matter that they normally eat different food. That's because the males hardly bother to eat during the breeding season, surviving off the fat they've built up over the winter. They need every moment they can spare to either have sex, or to stop other males from having sex.

It's a tough and exhausting time for them, and they'll have lost a lot of weight by the time the winter storms come around and they head off to their bachelor's holiday in the open sea of the North Pacific.

[Photo by the US Fish and Wildlife Service, in the public domain.]
Posted by JK Revell at 15:05