The Largest Weasel Ever? 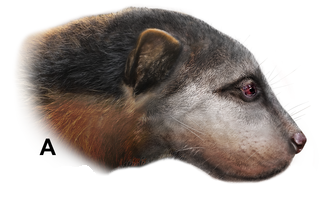 The weasel family were the first group of mammals that I decided to spend a year describing in detail on this blog, back in 2011-12. I concluded the series with a look at their fossil history, stating, among other things, that the fossil genus Enhydrodion "may" have been the largest member of the family to have lived. This, however, relies on guesswork relating the size of the body of the animal to its skull, which is all we have in any completeness. But there are, in fact a number of other fossil members of the family with even larger skulls, so a lot rests on their exact bodily proportions, which are often a mystery.

Such examples include the giant wolverine Plesiogulo (for which we have not only the skull, but, just possibly, the penis bone), the giant hypercarnivorous honey badger Eomellivora, and the relatively long-legged Ekorus, whose relationship to other mustelids is unclear. But, according to a new analysis, the largest mustelid skull known belongs to an animal called Megalictis ferox.

Of course, calling Megalictis a "weasel" is a bit of a stretch. The weasel family is very diverse, including such animals as otters, badgers, and wolverines, as well as more obvious examples such as polecats and stoats. So, yes, it's really only a weasel in the same sense that a badger is... and that's assuming it's a member of the weasel family at all. So, let's start with that - what is this animal, and is it really a mustelid?

The first remains of Megalictis were uncovered in 1901, from a fossil bed in Nebraska. Six years later, in 1907, W. D. Matthew, a curator at the American Museum of Natural History wrote up and published the first formal description of the animal, based on a more recent fossil, this time from South Dakota. In fact, 1907 was a good year for giant American mustelids, because two others, the similarly sized Aelurocyon and the slightly smaller Paroligobunis, were also named that year, based on skulls from the same general locality.

Much later, in 1996, a review of all of these animals was undertaken, concluding that they were all actually the same thing, and that the minor differences between them could be put down to individual variation. Perhaps, for example, the species increased in size over time, or perhaps the smaller specimens represented females; we can't know the real reason, but either way, it's now agreed that there's only one species here. Matthew, it turned out, had got his description out just one week before the first of his rivals, so it was the name he had coined, Megalictis ferox, that remained the official one.

From the fossils that we have, we know that these animals lived in Nebraska, South Dakota, and Wyoming, and likely into the surrounding areas as well - a possible specimen has also been identified from Colorado. It lived during the early Miocene, roughly between 23 and 19 million years ago. The world was hotter then than it is today, although it's worth noting that Megalictis seems to have died out at about the time of a rapid hike in global temperatures to even higher levels.

This is, however, a very long time ago, and, crucially, it's before almost any of the modern types of mustelid (such as otters, martens, and so on) had likely come into being. It's this that raises the question of whether or not Megalictis is truly a member of the weasel family. Certainly, they don't belong to any group we'd currently recognise today. In 1998, Megalicitis, along with a number of other fossil genera, was placed within a newly erected subfamily. These creatures, the oligobunines, were thought to be an extinct lineage of mustelids that had likely originated in North America. 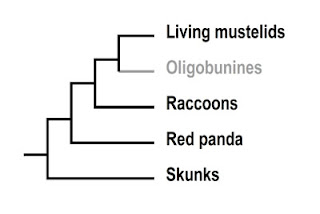 But the question of where exactly they fit, and, indeed, whether they were really a group at all, remained open. At one end of the debate, we have a 2008 study which showed that at least some of the oligobunines, including Megalictis, form a genuine subfamily within the mustelids. According to this view, they are related to the martens and wolverines, although some genetic analyses have since suggested that martens didn't actually appear until much later. At the other extreme, a 2005 analysis indicated that the oligobunines are not mustelids at all, but represent a very early branch in the family tree that eventually led not just to weasels, but also to raccoons, among others.

To try and resolve this, the new examination of Megalictis also compared detailed features of the skull and lower jaw of this animal with other putative oligobunines, along with living mustelids, and with their closest known relatives, the raccoons and skunks. The results came out between the two extremes mentioned above, with oligobunines more closely related to mustelids than to raccoons, but not actually within the weasel family as it exists today. At this point, there are two options. One could define the mustelids narrowly, as anything descended from the last common ancestor of American badgers and stoats (in which case, the oligobunines don't count), or broadly, as anything closer to stoats than to raccoons (in which case, they do). I'd argue, as the study authors do, that the latter is simpler, but it's just a personal preference.

It's worth adding, perhaps, that the weird aquatic animal Potamotherium was part of the oligobunine group as originally conceived. It's very probably nothing of the sort, which may go some way to explaining the confusion about that group's placement, but quite what it really is we still don't know.

But, bearing in mind that this may yet be contradicted as more evidence comes in, let's just say that the balance of current opinion is that Megalictis and its kin are indeed giant mustelids, and move on. What was the animal like?

Well, for a start, it was pretty big - certainly larger than a wolverine, which is probably the modern animal it most resembled physically. We don't have enough of the skeleton to measure it accurately, but the skull is about the same length as that of a jaguar. Now, in fairness, jaguars, like all cats, have unusually short snouts, and Megalictis didn't. So saying that the animal as a whole was "jaguar-sized" may be leaping ahead of the evidence... but it may well have been in the same general ball-park.

Interestingly, when  W.D. Matthew first described Megalictis in 1907, he thought, on the basis of the partial skull that he had available, that the animal really did have a short, cat-like face. From this, he inferred (not unreasonably) that the creature was a deadly, cat-like predator, prowling for fresh meat on the high plains of the northwestern US. The more complete skulls we have now suggest a longer snout, so that a cat is probably not the best analogy.

Still, they also show attachments for what appears to have been an unusually long and powerful temporalis muscle. This is the muscle responsible for closing the jaw, and implies that the animal had a wide gape and a particularly strong bite. Taken together with the shape of the snout and the heavy, somewhat blunt, teeth, the authors of the new study suggest that a better analogy for the animal would be, not a cat, but a hyena. Rather like wolverines, they say, Megalictis could have cracked bone, and, being a lot bigger than a wolverine, even large bones would have been within its capabilities.

Hyenas, of course, no more existed in Miocene America than they do in the America of today. Instead, Miocene America had bone-cracking dogs, animals that likely had a very similar lifestyle to modern hyenas. But the Miocene was a very long period of time, and the first true bone-cracking borophagine, Aelurodon, didn't come along until 16 million years ago - too late to have competed with Megalictis.True, the latter was nowhere near as specialised for this task as the borophagine dogs would later be, but it may have helped fill the bone-cracking predator niche before the dogs came along and beat it at its own game.

At the very least, it must have been one of the top predators of its day, feeding on three-toed horses, early camels, and strange, pig-like oreodonts.

[Artwork by Adam Hartstone-Rose, from Valenciano et al 2016, under the Creative Commons Attribution (CC BY) license. Cladogram adapted from Nyakatura & Bininda-Emonds, 2012.]
Posted by JK Revell at 14:10