Most greater kudu are found south of the equator, with one population right down in the furthest southern reaches of South Africa. However, there is a second  isolated populations in the Horn of Africa and a third just south of the Sahara in Sudan, South Sudan, and Chad. These are usually regarded as distinct subspecies, although at least a couple of more recent sources raise them to full species status, even going as far as to separate the South Aftican population off as a fourth species, distinct from the more general southern form of the animal.

Greater kudu do not like being too far out in the open, and generally inhabit lowland scrub thickets and semi-open woodland, avoiding both deep forest and grassy plains. While the expansion of agriculture across the region has pushed some of them into higher, rockier, terrain than they might otherwise prefer, they are generally fairly tolerant of human presence, and can survive close to farms if the local vegetation provides enough cover.

They are browsing animals, and their larger size means that they can reach leaves higher up than most other antelopes can, which likely helps to explain their preference for woodland. The downside is that they have to eat rather a lot to keep themselves going, and to help with this they appear to be fairly indiscriminate about their food, and are quite capable of eating plants that would make many other animals sick. During the wet season, this isn't an issue, with plenty of tasty foliage around, but as the rains fade, they are forced to switch to ever more woody and unpalatable food, having to eat more of it to extract what little nutrition is still available.  Finally, as the dry season draws to a close, they resort to the poisonous fruits of Strychnos trees - relatives of the plant from which we get strychnine, a chemical often used in rat poison. Which seemingly do the kudu no harm at all.

Greater kudu do not live in large herds. Females form groups of no more than around six adults and their respective calves, but the young males leave at the end of their second year, forming casual associations of up to ten bulls, which compete among themselves for dominance, but show no particular long-term loyalty to one another. Indeed, as they get older, they spend more time alone, saving the effort of fighting off newcomers.

The female groups, which do retain a fair degree of fidelity, migrate up into higher land and onto drier savannah during the wet season, but return to rivers and lake shores when the rains stop. The males, however, tend to stay put by the rivers, so that the two sexes are apart for much of the year. This may be due to differing tactics for avoiding predators, or perhaps the calves that mothers are caring for need a different sort of food, but, in any event it isn't that unusual among hoofed animals. It may be worth adding that the females can stay away from the rivers for so long because, while both sexes can gain most of the water they need from their food the females are particularly resilient to the effects of drought.

Greater kudu are also, as one might expect, tolerant of high temperatures, and don't curtail their summertime feeding activities until the temperature soars above 36°C (97°F) - which, nonetheless can happen about one day a week at the right time of year. They can, unsurprisingly, fall victim to a wide range of local predators, but are said to have one of the loudest alarm calls of any antelope, easily alerting one another to potential threats.

Mating takes place around August to September, with the calves being born nine months later, as the rains return. Male greater kudu don't actually fight all that much, and just don't  seem to feel the need to dominate females or claim distinct territory for themselves. For their part, the females only seem interested in the older males, so there really isn't a lot of point in the latter asserting their dominance. On the rare occasions when they do fight, however, the combat can become quite intense, and it has been known for bulls to accidentally lock their horns together so tightly that they literally cannot escape from one another's grip, and eventually die of exhaustion.

As one might expect, the lesser kudu (Tragelaphus imberbis) is smaller than its 'greater' relative. Full-grown males stand no more than 118 cm (3' 10") at the shoulder, and usually less, and have horns an average of 52 cm (20 inches) in length; as with greater kudu, the females are noticeably smaller. They also tend to have more, and clearer, stripes on their flanks, up to three full twists on the horns, and the males do not have a beard, as those of greater kudu do (the full scientific name means "beardless goat-deer"). In most other respects, they are physically very similar. 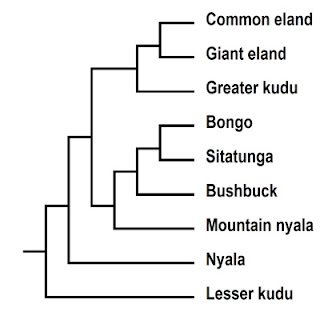 Which is why it's surprising that, genetically, they turn out not to be all that closely related. In fact, they appear to represent the oldest surviving branch on the spiral-horned antelope family tree, and are often given their own genus, Ammelaphus, as a result. Beyond the admittedly many similarities that simply go with being a spiral-horned antelope in the first place, all their other points of resemblance to greater kudu, such as the shape of the horns, are a result of convergent evolution, a coincidence of sorts, rather than the result of a close relationship.

Lesser kudu are not so numerous as their greater kin, and are found across a smaller (although still quite large) geographic area, from the Horn of Africa in the north down to central Tanzania in the south. They do, however, have similar habitat preferences, and in their case, are most often found in semi-arid thorn scrub, sticking to the rivers in the dry season but moving a short distance afield when the rains come. They eat a wide range of plants, with a particular penchant for succulents, which doubtless help maintain their water reserves. Like many African ruminants, they eat in the morning and early evening, standing around to relax and chew the cud during the hottest parts of the day.

The females live in small groups of no more than four, plus their calves, and are seemingly egalitarian, with no evidence of any dominance hierarchy. The males, once they have left their mothers, don't typically gather together at all, although groups might be seen around a particularly useful food resource from time to time. When they do meet up, they can be quite energetic, jumping and running about as well as greeting each other with mutual grooming. Females and their young also engage running and leaping games that must provide practice for escape from predators. In fact, they are fairly agile animals, being able to jump as high as 2.5 metres (8 feet) in order to clear obstacles, much the same height as the larger, but slower, greater kudu can manage.

Their mating habits are similar to those of greater kudu, too, although, while young are more likely to be born between September and December, there is no distinct mating season, and so births can occur at any time. This may be connected with the fact that the females don't tend to travel as far as those of greater kudu, so the two sexes, if not actually living together, are never too far apart. They reach sexual maturity around the middle of their second year of life, and older males are somewhat less tolerant of younger competitors, although still quite relaxed in comparison to some other animals.

The preference of kudu for dry woodland and scrub allows them, especially the greater species, to inhabit wide swathes of Africa. But not all spiral-horned antelopes live out on the savannah, and next time I'll be looking at a couple of other species, each with a rather different habitat.

[Photos by Jean-Louis Vandevivère and Lip Kee Yap, from Wikimedia Commons. Cladogram adapted from Bibi 2013 and Stankowich 2009.]
Posted by JK Revell at 14:54