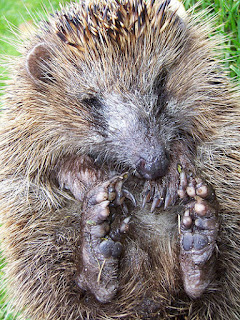 While shrews are found just about everywhere other than Australia and Antarctica, today, hedgehogs are found only in the Old World. However, there are fossils of animals that certainly look like hedgehogs from the Americas. However, they are very old ones, and, for the reasons given above, it's hard to tell whether or not they really were hedgehogs, or just something that looked kind of similar. Perhaps they, too, hadn't changed much from the ancestral placental form.

It doesn't help that, for most of these animals, all we really have are teeth, and whatever bits of the skull or jaw they happen to have been attached to. And, since the whole point is that these are fairly unspecialised, compared with distant placental ancestors, those aren't always terribly helpful. It would be nice to have some other bits, if only to tell us more about how the animal lived its life, but ideally to tell us where it fitted in the mammalian family tree.

But insectivores are small, and, while hedgehogs are among the largest ones, they still aren't that big. Which is a problem, because their skeletons tend to break up and get washed away into separate pieces after they die, in a way that's less likely to happen with larger animals with heavier bones. So, it's not that we haven't got the bones of these early hedgehog-like beasts - in fact, we probably have a great many - it's just not obvious which animal (as identified by the teeth) they're supposed to go with.

Nonetheless, this hasn't stopped palaeontologists from having a go. And some of these theories have subsequently been confirmed when more intact skeletons were discovered. Which brings me to a group of animals called the sespectidines. These lived during the Eocene, with the oldest fossils dating back over 50 million years, and primarily in what is now the southern US, from Texas to California. While there were suggestions back in the '60s and '70s that these were not Insectivores at all, as we now know them, it has generally been thought since then that they are at least more closely related to hedgehogs than to anything else alive today.

A number of small mammalian ankle bones have been recovered from fossil sites near San Diego, dating to a little over 40 million years ago, and these have recently been identified as belonging to three different species of sespectidine animal. The first question to ask, however, is probably "is this right?" After all, the ankle bones weren't attached to anything else, so can we really say what animal they belonged to before they became separated - presumably between the animal turning into a skeleton and the bones being buried and fossilised?

They are small bones, and there's no indication that they belong to animals that weren't adults, so this does rule out rather a lot of possibilities. Furthermore, while there are a number of other small mammals known from this time period and place, most of them have well known, and often distinctive shapes, to their ankle bones, so we can rule them out, too. Apparently, about the only other thing they could plausibly belong to is some kind of early rodent, and the authors argue that they can tell those apart, as well. Assuming that they know what they're talking about, there really isn't much else that the bones could belong to; the only other possibility would be that some animal happened to leave lots of ankle bones about but very few, if any, teeth or skulls. Which seems unlikely.

So, okay, they belong to sespectidines. But, really, what can isolated ankle bones tell us about an animal? Well, actually, quite a bit. This is because we can tell from their shape how flexible the ankles were, in what way, and, to some extent, the relative size of the various leg muscles attached to them. And that, in turn, can tell you how the animal walked and moved about, which is a key element of its lifestyle. Compared with that from, say, ribs, this can be useful information.

In this respect, it turned out that what was missing was more significant than what was present. The bones did not show any of the signs of flexibility that would be expected for an animal that climbed trees, and few signs that might indicate that it ran swiftly. Most likely then, it simply walked, doing little more then scrambling over rough terrain from time to time. So, not that different from a hedgehog or a shrew, then.

As for their relationships with other animals, both living and extinct, here the features were rather more ambiguous. As already expected, combining the features of the new bones with the teeth and other remains already known showed that sespectidines were not literally hedgehogs (that is, members of the hedgehog family as we know it today). In fact, living hedgehogs, shrews, and even moles, all share some features that sespectidines just didn't have. This suggests that the prehistoric animals represented an early branch in the evolution of the group, no more related to modern hedgehogs than, say, moles are.

Yet they do still belong to the wider group Eulipotyphla, because the fourth living family in that group - the obscure Caribbean animals known as solenodons - seem to have branched off even earlier, perhaps as far back as the Age of the Dinosaurs. So, even though they were not actual hedgehogs, nor even particularly close to them, they did at least belong to the same general lineage.

Which is more than can be said for some of the other animals that I was once taught were all in the "Insectivora".

[Photo by Jürgen Howaldt, from Wikimedia Commons.]
Posted by JK Revell at 13:18