The Laziness of Venomous Shrews 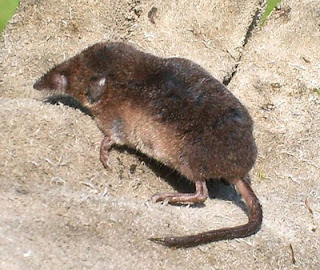 While there are some bats that could challenge them for the title, by most measures, shrews are the smallest of all mammalian species. They typically weigh no more than about 20 grams (two-thirds of an ounce), and are often much smaller than that. Being so small poses a number of challenges, but there's one in particular that affects mammals of this size that would not affect, say, beetles.

This is because mammals are warm-blooded, and need to generate internal heat in order to keep functioning (unless they're hibernating). The smaller you are, however, the more rapidly you lose heat through your body surface, which means that shrews need a fierce metabolism to keep burning enough calories to keep themselves warm. This means that they have to eat almost constantly, but it also means that they want to exert themselves as little as possible while doing so, so as to waste the minimum amount of energy in the process.

Which might not be so bad if they ate plants, but they instead eat flesh (mostly of insects and worms), which is the sort of thing that inevitably requires some effort to catch. Something called "Optimal Foraging Theory" predicts that any predator should always try to catch the highest-energy food and do so in as quick and energy-efficient a manner as possible, and shrews are a fairly extreme example of just how important this can be.

However, there's another unusual feature of shrews, in addition to being small: some of them are venomous. Venom is very unusual among mammals, and most of those species that do possess it are either shrews or at least other small creatures closely related to shrews. (The most obvious exception is probably the platypus, with its venomous foot-spurs, but the anti-coagulant saliva of vampire bats also counts, under a technical definition of 'venom', as, rather weirdly, do slow lorises).

A disadvantage of using venom to kill prey is that you have to wait for it to take effect; ripping your victim's throat out with your teeth is going to have much the same end result, only quicker. On the other hand, assuming that the venom isn't itself particularly costly to produce, stabbing something once and then retreating probably does save you energy over having to fight it up close. So perhaps that's why it's most common among animals like shrews.

Even so, most shrews are not venomous. At the last count, there were almost 400 different species of shrew known, and they're exactly the sort of animal that we keep discovering more of, being easy to overlook and not intensively studied. Of those species, we know of just five that are definitely venomous. It's a fairly safe bet that the actual number is higher than that, due to the aforementioned lack of study, but it's probably not that much higher.

Since these shrews are often very similar in other respects, it gives us a chance to see whether the venomous sort really do use their venom to save themselves effort, or if there is some other benefit to the feature. A recent study took shrews of two different species, placed them in terraria with tasty-looking live food, and watched to see what they did with it.

The two species of shrew in question were common shrews (Sorex araneus) and water shrews (Neomys fodiens), both of which are widespread in central and northern Europe. Water shrews are the larger of the two species, and they happen to be the ones with a venomous bite. (Of the other four shrews that we know for certain are venomous, one lives in southern Europe, and the other three in North America).

When presented with prey that couldn't really fight back, such as beetles and insect larvae, both types of shrew simply attacked, killed, and ate them. Whether or not the shrew was venomous made little difference, so it's interesting to note that this is the bulk of what they'd eat in the wild - which may explain why common shrews aren't at a disadvantage against their larger cousins, despite living in broadly the same areas.

The researchers also, however, faced the shrews off against prey larger than themselves, specifically common and water frogs (Rana and Pelophylax spp.) Both species of shrew were clearly up for the challenge, and attacked the frogs, apparently identifying them as a possible food source. The common shrews, however, were less keen on doing so, and were roundly beaten every time they tried. The water shrews, however, did score a few victories, thus taking down prey twice their own size.

Toads (Bufo sp.), however, proved too much of a challenge even for them, and the water shrews mostly stayed away from them. On the occasions when they did attack, they seem to have been beaten partly by the sheer size of their opponent, and partly because happen to have poisonous skin themselves, leading the shrews to back off after a bite and try to clean themselves of the foul-tasting toxic residue.

Nonetheless, they had beaten the frogs, which the non-venomous common shrews had failed to do. But was that just because the water shrews also happen to be larger, and did they back off after the initial attack to allow the poison to do its work without them having to exert themselves?

In short, no. In fact, they attacked with a flurry of bites to the frogs' bodies and limbs, rather than aiming straight for the throat and neck, where arteries would carry poison straight to the brain, and bring a more rapid end to the fight. Since their venom is at least partly paralytic in function, it may be that they are more concerned with paralysing the frogs' legs so that they cannot escape than in knocking them out altogether. Whether or not that's the case, though, there was certainly no evidence that the water shrews put any less effort into subduing frogs than they otherwise might - they kept up their attack until they had obviously won, with the venom, at best, making the duration of that fight a little shorter.

So, not at all the strike-and-retreat attack that would be used by snakes. Now, it has to be said that shrew venom is much milder than, say, rattlesnake venom, and water shrews, in particular, are not as venomous as some of the shrew species in North America. Since making the venom must surely involve at least some metabolic effort itself, it seems unlikely that, in this species at least, it's used primarily to save energy.

So why bother? An answer may come from the way that the shrews handled more medium-sized prey, such as earthworms. Here, it's notable that it did take significantly less time for the water shrews to subdue their chosen prey, so it may be that the venom at least helped them there. But, once they had done so, they often dragged the paralysed, but still-living animal back to their lair to store for future use - something they also did with those frogs they managed to defeat. (By 'lair', of course, I mean 'flower pot' - they were in a terrarium).

Now, the common shrews hoarded their food too, but they had to bite the worms until they could no longer struggle before doing so. More importantly, perhaps, the worms would rapidly die from their injuries, whereas the water shrews were able to store food that hadn't quite died yet. And that sort of food lasts longer before going off, which is a definite plus.

So, they may be saving themselves some effort in overpowering medium-sized (but not frog-sized) prey, but they also save themselves the much more significant effort of going out to find it in the first place. If your dinner is waiting for you back in the flower pot, and you don't have to eat all of it at once, why bother going out to look for more?

[Photo by Manuel R., from Wikimedia Commons.]
Posted by JK Revell at 11:00