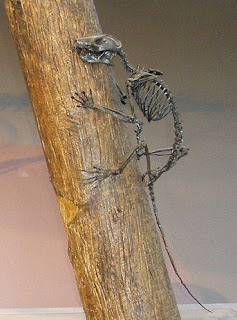 Scientists do, nonetheless, agree on two things about the plesidapiforms. One is that they are more closely related to living primates than to anything else alive today, and the other is that they aren't really a single evolutionary group, but represent a number of otherwise unrelated side-branches on the tree that led to modern primates. Which is to say, the argument is over just how close something has to be to, say, a monkey, to count as a primate, rather than something else.

There are a number of different families of plesiadapiform currently recognised, and the best known one is that for which the wider assemblage is named: the plesiadapids. These animals lived across the Northern Hemisphere, in Asia, Europe, and North America, and they did so over 55 million years ago - before the oldest known definitive primate. In fact, that point in time was quite a crucial one for them, because it was then that they died out in North America, and that most of them died out elsewhere as well.

Most, but not all. At least one genus of European plesiadapid did survive into the Eocene, although, not, perhaps, for terribly long. As is common at the boundaries between defined geological epochs, there was a significant change in climate 55 million years ago, which would, in turn, have changed the local vegetation. The assumption, therefore, is that this one genus, Platychoerops, was somehow better suited to this new habitat than its predecessors, and survived where they did not.

A recent discovery from a site near Compiègne, just north of Paris, sheds some light on what was happening here. Specifically, this one site revealed the fossils of no less than three new species of plesiadapid, seemingly from essentially the same deposit, implying that they lived alongside one another at this time and place. The deposit dates from just before the start of the Eocene, with two of the new species representing genera thought to have died out at that time, and the third being an early member of Platychoerops. So why did it leave descendants, while the other two did not?

It turns out that one of the key differences between Platychoerops and the other two genera we know of from this time period - Plesiadapis and Chiromyoides - is that its teeth are more suited to a tough diet. This seems to be best explained by a shift from eating mainly fruit (as many primates still do) to feeding primarily on leaves.

This seems to be a general shift in the evolution of the group, with even North American species of Plesiadapis from just before the dawn of the Eocene showing some changes in that direction, but not to the extent of the ones that eventually ended up surviving. In this regard, it's interesting to note that the newly discovered species of Platychoerops from France is part way along this pattern of change, more suited to leaf-eating than the known American species of the time, but less so than those which followed it into the Eocene.

In fact, this seems to fit quite neatly with the overall pattern of development, with these new discoveries slotting into the gap, steps in the gradual process of the group becoming steadily more adapted to a new diet. The one problem is the existence of those North American species. That's because they're a little bit too similar to their European contemporaries.

We're left with two possibilities. On the one hand, they could be similar because the animals on both sides of the Atlantic regularly nipped across (on geological time scales) from one to the other, evolving together because, in the grand scheme of things, they were part of the same population. That would explain why they are so similar, but raises the question of why nothing else - including some other animals with generally similar habits and habitat preferences - made the same trip.

The alternative is that, after one initial trip across the Atlantic (probably an eastward one) the populations on each continent evolved in parallel, developing the same features because the climates on each side did change in broadly the same way at the same time. This, unfortunately, requires a rather greater degree of parallel evolution than is, perhaps, entirely plausible, especially given what seems to be a very rapid appearance of a whole number of different species with similar features at around the same time, which would be quite a coincidence.

But not, perhaps, impossible, which leaves the question of how exactly the last of the plesiadapiforms switched to leaf-eating open. But it wasn't enough to save them, because at around the same time, entirely new tree-dwelling animals began to appear in Europe, and a few million years later, out-competed the plesiadapiforms, driving them to extinction. Some of these new animals may well have been rodents, which were just beginning to get a hold at the time, but others would have been true primates, beating their more primitive relatives at their own game.

And the rest, as they say, is history.

[Photo by "ghedoghedo", from Wikimedia Commons.]
Posted by JK Revell at 15:26