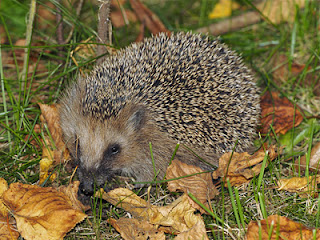 There can be few British mammals more distinctive and well-loved than the hedgehog. Indeed, a 2016 poll found that it is, by a substantial margin, Britain's favourite mammal. (For what it's worth, and by a similar margin, the robin is apparently our favourite bird).

The animal that Brits simply call "the hedgehog" is more accurately the European hedgehog (Erinaceus europaeus), and it's found through pretty much the entirety of western Europe. In fact, across much of the continent, the eastern border of its occurrence is very roughly where the old Iron Curtain used to be. That's a simplification, of course, and aside from some border regions of former 'Eastern Bloc' countries, they are also found quite extensively in the Czech Republic, Estonia and parts of north-west Russia. They are also common on several larger islands, including Ireland, Corsica, Sardinia, and Sicily, and, in more recent times, they have been introduced to the Azores.

In wild environments, hedgehogs inhabit woodland areas with dense undergrowth. They avoid pine forests, since they tend to lack much in the way of undergrowth, and while they do live in mountainous regions, they never venture above the treeline, with about 2000 metres being their limit in the Alps. One of the reasons that hedgehogs are so popular with the public, however, is that they are also quite frequently seen in areas that are not at all wild.

Although a dense network of busy roads can be a limiting factor for hedgehog populations, they don't seem too bothered by the presence of humans, and can be found in hedgerows, parks, and even gardens. In fact, hedgehogs are more common in suburban areas than they are in farmland. A number of studies have shown that this has nothing to do with the nature of the habitat, or the presence of suitable food, and everything to do with the fact that badgers really don't like being close to humans - since badgers eat hedgehogs, residential areas end up being much safer for the latter.

Hedgehogs are omnivorous and will eat almost anything, from mushrooms and fruit to eggs and carrion. They will even attack snakes, and are apparently immune to the bite of Britain's only venomous snake, the adder. The bulk of their diet, however, consists of invertebrates, such as insects, spiders, earthworms, and slugs, including some species that have chemical defences rendering them pretty much inedible to most other animals.

Hedgehogs are, of course, nocturnal, and typically remain active for the whole of the night, only venturing out during the day when they are particularly hungry (for instance, mothers suckling young) or sick. Since humans generally aren't nocturnal, this may help explain why they don't mind living near us much, and there is some evidence that, in suburban areas, they are most active after midnight when almost everyone has gone to sleep.

Hedgehogs also hibernate during the winter, when food is particularly scarce. How long they do this for depends on the local climate, but, in any event, it isn't one massively long snooze, but divided up into several shorter periods, averaging about nine days, although up to four weeks has been reported. Body temperature is greatly reduced during hibernation, reducing the need for food to keep the body fuelled, and it's interesting to note that hedgehogs have shorter periods of less extreme semi-hibernation through much of the year, but especially just before entering true hibernation.

Hedgehogs typically sleep under cover of brush or other vegetation, although they may use abandoned rabbit burrows, or even dig short ones of their own. They can travel a kilometre or more from their sleeping spots during a single night and, at least when they aren't hibernating, don't regularly return to the same one. In fact, while they are antisocial, they aren't territorial, being more than happy to share their home range with other hedgehogs... so long as they can coordinate their activities so that they don't actually have to meet each other. When they do, they'd rather just wander off than fight, unless there's a particularly promising bit of food that they both want.

Breeding occurs in the spring, with an opportunity for a second litter later in the year, if the first one is lost. Pregnancy lasts 31 to 35 days, after which the young are born in a grass-lined nest. The spines of a newborn hedgehog are soft and whitish, but begin to harden not long after birth, and begin to be replaced by adult spines after just two to seven days. They are weaned at four to six weeks, and are ready to breed the following spring - those born in a second litter late in the year typically grow more rapidly than those born early on, and so manage to 'catch up' in time.

As one might expect, given their antisocial natures, only the female cares for the young. In most cases, she only has a single mate in a given breeding season, although individual males mate with several females, and some instances of multiple paternity have been reported. The exact time of the breeding season varies significantly with the local climate, and the males undergo a number of hormonal changes as it approaches, with, for example, their testicles doubling in size for the duration.

An unusual habit of hedgehogs that has sometimes been linked with sexual activity is their propensity for licking themselves with frothy, slightly smelly, saliva. While we know that males "self-anoint" in this manner more than females do, and that it's more common in summer than at other times of the year, it's also more common with juveniles than adults, so the link with breeding is ambiguous at best. It might help deter predators, or have different functions at different ages - sex for adults, alerting their mother for juveniles - or... well, we really don't know.

The European hedgehog is sometimes known (especially in Germany) as the "brown-chested hedgehog", because the fur of its underparts is similar in colour to that on the head and between the spines on the remainder of its body. White-chested hedgehogs are found further east, across the Balkans and most of the rest of eastern Europe, and even into parts of central Asia. They were long assumed to be a single species, but in 1996 genetic evidence showed that those living in Turkey were a different species to those elsewhere.

That has since been confirmed, so that now we know of both northern (Erinaceus roumanicus) and southern (E. concolor) species of white-chested hedgehog. While the latter is found further afield than Turkey - as far south as Israel and as far east as northern Iran - it is almost entirely absent from Europe, being found only on Rhodes and a couple of neighbouring islands in the eastern Aegean. The only other species of hedgehog in Europe is the Algerian hedgehog of eastern Spain which, as its name suggests, is also found in many parts of North Africa. Less closely related to the European hedgehog than the white-chested species are, it can be distinguished from them by a different pattern of spines on the head.

The hedgehog family as a whole is not especially large. There are seventeen widely recognised species of hedgehog across the world, all of them found in either Eurasia or Africa. They are all instantly recognisable as hedgehogs, although some do have noticeably larger ears than any of the European species. The exact relationship between the different species is still not entirely resolved, but one thing we do know is that the hedgehog family also includes at least seven species that are not hedgehogs.

Today, these other animals are usually called "gymnures", and they live only in Southeast Asia. They are are essentially long-tailed hedgehogs without any spines - making them look rather like unusually large shrews. While some are more or less mouse-sized, the largest species, the moonrat (Echinosorex gymnura) of Malaysia, Borneo, and Sumatra, is actually larger than the largest hedgehog, albeit not by very much, and a couple of others come close.

The physical appearance of the gymnures makes it perhaps unsurprising that hedgehogs are related to shrews. Their numerous teeth, relatively narrow snouts and, perhaps, even their diet, also point to this relationship. Together, the hedgehog and shrew families belong to a larger grouping technically called the Eulipotyphla. Apart from two endangered species found only in the Caribbean, this includes just one other family, and it's one that happens to look rather less shrew-like than the others. One species from that family lives in Britain, and it's also the last animal on my list...

[Photo by Jörg Hempel, from Wikimedia Commons. Cladogram adapted from He et al. 2012.]
Posted by JK Revell at 15:02