For much of the 20th century, it was thought that there were only two species of lynx, one of which lived right across the high latitudes of the Northern Hemisphere, from Portugal to Newfoundland, by way of Siberia and Alaska. That began to be questioned towards the end of the century, and, since about 2005, it's been pretty much universal to consider this widespread animal to actually comprise three different species. Two of those live in Eurasia, with the other one found only in North America.

This, of course, is the Canada lynx (Lynx canadensis); the alternative form of 'Canadian lynx' is also used in some formal sources, but only seems about half as popular. It lives across virtually the whole of Canada south of the tundra but, despite the name, is also found in part of the US. Alaska is the most obvious example here, but Canada lynx can also be found south of the border in the Cascade and Rocky Mountains, around Lake Superior, and in much of Maine. Between 1999 and 2006, a number of Canada lynx were also re-introduced to Colorado, where they had been locally extinct since at least the 1970s; so far, they seem to be doing well enough.

The population on Newfoundland island, distinguished by a blander, greyer, winter coat, are usually considered a separate subspecies from their mainland kin. This has, however, been questioned, since it's not entirely clear how long they have been present on the island. They're certainly genetically distinct, which the formerly recognised Alaskan subspecies doesn't seem to be, implying, perhaps unsurprisingly, that the Strait of Belle Isle is a more effective barrier to travel and interbreeding than the Rocky Mountains are.

As this range would indicate, Canada lynx are primarily forest animals. The type of forest doesn't seem to matter to them too much, and they inhabit both deciduous and coniferous woodlands. They do, however, prefer denser forests over clearings or sparse woodland and those cleared by natural (but not too recent) forest fires over truly tangled primary forest. Understandably, they avoid areas recently harvested by human foresters as well as those cut through by roads.

Perhaps more importantly, they seem to require at least four months of snow cover each year, which not only limits how far south they can get but may also help to explain their tendency to live at moderate to high altitudes rather than in easily accessible lowlands. Their large paws help in this regard, meaning that they don't sink into the snow, and can remain comfortable in areas where potential competitors such as coyotes would not.

All of this, and their nocturnal habits, can be explained by essentially just one factor: food. Famously, Canada lynx eat almost nothing but snowshoe hares (Lepus americanus) and the habitat requirements of the two species mirror each other almost perfectly. This isn't to say that the lynx literally eat nothing else at all; they won't turn up their nose at fresh carrion of other species, for example, and they may eat the odd bird or squirrel here and there, but the hares provide something like 96% of their food by volume, which is hardly insignificant.

As a result of this, and the fact that it lives in a relatively low productivity environment with few confounding factors, there have been a number of studies of how lynx populations compare with those of the hares. These make regular appearances in biology textbooks, in particular how the populations of both animals synchronise in a 'boom and bust' cycle every eight to eleven years. The lynx part of the cycle lagging behind that of the hares by a year or two, as the effects of reduced/increased food supply feed through into litter size and the resulting kits grow to adulthood (or not).

These population crashes can be significant and have a considerable effect on the lynxes' behaviour and reproductive success. Most of the time, like other cats, Canada lynxes live solitary lives patrolling particular territories, although they don't seem particularly violent towards intruders so long as there's enough food to go around. When there isn't, this structure seems to collapse, and individual lynx may travel great distances rather than staying put. It's this that likely keeps up the high genetic admixture of their population between places as distant as Alaska and Nova Scotia and the animals probably rely on being able to maintain these long-distance contacts.

The breeding season is typically short, lasting for a few weeks in February and March, although it can be extended if hares are particularly abundant. In years when they are not, males and females still associate during the breeding season, but success is limited and few, if any, kittens are born as a result. When they are born, there is a considerable variation in the size of litters, again depending on the supply of hares that year; five kittens is about average, but it varies from one to eight as the population cycle works its way through. Unlike many other mammals, both males and females seem to disperse a long distance from their place of birth once they are old enough to do so, another factor that must help maintain the wide distribution of the animals.

The other species of lynx native to North America is the red lynx... which, if you've not heard of it, is much better known, at least in English, as the bobcat (Lynx rufus). Bobcats are slightly smaller than Canada lynxes, although both species are considerably smaller than the Eurasian lynx, and tend to have less prominent ear tufts and a darker - often reddish - coat. They are named for their short 'bobbed' tail, although, ironically, this is actually longer than that of the Canada lynx. Unlike the latter species, the underside of the tail is white, rather than being black all the way round, and, assuming you can get a clear enough view, is probably the surest way of telling the two apart.

Bobcats are found through almost the entire lower 48 of the United States, in southern Canada, and in northern and central Mexico. Their southern range may be limited by competition with other cats, notably the jaguar, but they clearly have no such problems with puma/cougar/mountain lions and, in some places, they are found alongside the Canada lynx.

For the most part, bobcats are forest animals, but, as one might expect, the details vary considerably across the enormity of their range. In Wisconsin, they tend to stick to lowland coniferous forests and, to a lesser extent, deciduous ones, but in Vermont, they are also common in areas of dense shrubland which still provide sufficient plant cover from which to pounce on their prey. They are also found in areas with relatively little tree cover, such as open prairies in Kansas, or the comparatively vegetated valleys of Arizona.

Like their Canadian cousin, bobcats feed primarily on rabbits and hares but they are nowhere near as reliant on a single species. Certainly, where snowshoe hares can be found, that's what they'll eat, but over most of their range, cottontails are a more important part of their diet, and there are other local variations, such as marsh rabbits and cotton rats being popular food items in Florida and Georgia. Although they have been noted to hunt and kill deer, especially those that aren't fully grown, they are more likely to feed on such animals when they encounter them as carrion, while males may occasionally take animals such as raccoons, or even porcupines.

Bobcats travel far less than Canada lynx, likely because they don't really need to, and they practice the more usual pattern of young males dispersing further than females when they reach adulthood. The fact that they don't travel as far probably explains their greater genetic variation and, while the total number of subspecies is debatable, there is general agreement that those in the eastern and western halves of the US are distinct. Oddly, the dividing line between them seems to run randomly through the middle of the Great Plains rather than, say, along the more obvious barrier of the Mississippi. Most likely, there was some climatic/habitat boundary there during the Ice Ages, and the subspecies are descended from the populations that sheltered on either side of it. 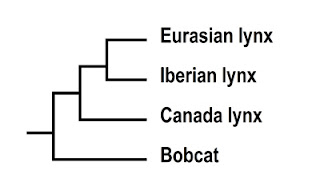 Bobcats seem to practice some form of "land tenure", where each animal maintains a core territory that remains constant throughout their life, along with a wider area around that which they are more willing to share with neighbours, even of the same sex. When one bobcat dies, a neighbour (typically of the same sex) may move into the vacated core territory wholesale, without making any significant changes or expansion to its former borders.

How big these areas might be can vary as much as tenfold across their geographic range, depending on how much food they can reasonably expect to find. They are marked in the ways that cats usually mark such things, from scratches and rubbing to urinating; indeed, some of the scent compounds found in their urine are very similar to those used by domestic cats.

Breeding can occur throughout the year in some parts of their range, but is more common in the spring, as it is with Canada lynx. Litters are also smaller, but less variable in size, than those of the northern species, without about three kittens being most common. Despite the fact that bobcats and Canada lynx last shared a common ancestor about 3 million years ago, during the Late Pliocene, the two can and do interbreed in places where both are found, and there is evidence that at least some of the resulting hybrids are fertile.

It may be that some people reading this, and the previous post in the series, are thinking 'wait, aren't there lynxes in Africa, too?' Well, I haven't forgotten them, but before we get there, it's time to head south and look at some of the cats of Latin America, starting with another one that's probably fairly well known...