Out of Your Hole 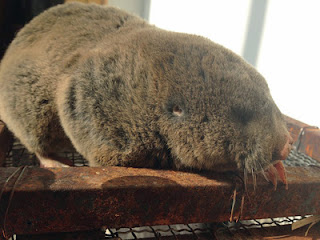 Many animals dig burrows. They can be used for shelter when sleeping, or as a safe place to raise young and, while they may take more effort to construct than finding a natural rock crevice or hiding beneath a log, it's often worth it. Especially if you happen to live in an environment - open grassy plains, for example, where such alternatives are hard to come by. Although, admittedly, this does tend to apply only if the animal in question is small; not only would it take more effort for a large animal to dig a burrow, there's less that's likely to eat it, and it would be harder to hide the entrance anyway.

But some small mammals go further than merely digging burrows to sleep in. They spend almost their entire lives underground, being able to feed off earthworms, roots, and the like. It's a peculiar environment to live in, entirely lacking in light, and requiring constant work to maintain, as well as often being low in oxygen. But it is undeniably safe, not just from most predators, but also from inclement weather (so long as you're not somewhere that's prone to flooding).

In fact, for an animal that's adapted to life underground, coming to the surface can be positively dangerous. While nocturnal animals often have excellent eyesight, even enough to see by starlight on the night of the new moon, subterranean ones, such as moles, often can't see well at all, and some are completely blind. There's a big difference between starlight and total blackness, even if it's not always obvious to humans. And being near-blind means that, once you are above ground, you can't see predators coming. If they happen to be flying predators, even your likely ability to exquisitely sense vibrations in the ground won't be much help.

So, if underground is where you feel safe, you probably don't want to come out at all. Except, of course, such animals do. Not very often, granted, but even the most subterranean of animals sometimes has little choice.

Given that this is a rare event, and the animal will obviously be doing its best not to be observed when it does so, most of the evidence that such creatures do so is indirect. For instance, we know that barn owl dung sometimes contains the remains of subterranean rodents, and that some blind mole rats line their nests with green leaves, which they clearly have to be getting from somewhere.

It's likely, of course, that different species will have different motivations for making this dangerous foray, and, indeed, that the risk won't be the same for all of them. But one such group of animals are the zokors of eastern Asia.

Zokors are rat-sized rodents that physically look rather like a mole, with rounded heads, no external ears, tiny eyes, and large digging claws. For much of the 20th century, they were assumed to be a sort of subterranean vole, with a later view shifting towards them being more closely related to hamsters, which are members of the same rodent family. Over the last twenty years or so, however, more detailed genetic studies have confirmed that they are instead related to the blind mole rats, which today are placed in a family of their own, distinct from the main group of mouse-like rodents. This implies that, rather than independently evolving a similar lifestyle, the common ancestor of the blind mole rats and zokors began to live underground very early on, splitting from more obviously mouse-like animals long before true mice actually existed. 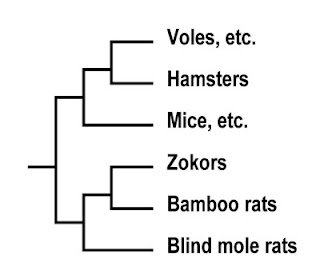 Largely obscure animals, the best-studied of the known species of zokor is probably the plateau zokor (Eospalax fontanierii). This is found in central and northern China, where it lives in high altitude grasslands and feeds on roots and tubers. Since it leaves behind mounds that resemble molehills, local farmers regard it as a pest, although we now know that it helps to aerate the soil, preventing erosion and distributing nutrients on the windswept plains.

This means that zokors are likely to be helpful to the local environment and maintaining overall biodiversity. In 2015, a study to determine how common the animals are, and over what area they typically move was being conducted at a site near the eastern end of the Qilian Mountains, which form the northeastern boundary of the vast plateau of which the Himalayas as the southern edge.

Over 3,000 metres (9,800 feet) above sea level at the eastern end of the Qilian Mountains, the site of the survey is cold and relatively desolate; with no completely frost-free periods, even in the height of summer, there are no trees and the vegetation consists primarily of grasses. To conduct the study, the researchers captured zokors from their tunnels, and fitted them with radiocollars to follow their movements below ground. At one point, the signal from one of the collars suddenly became much stronger and, going to look, the researchers spotted the animal concerned moving about above ground.

It had previously been assumed that zokors spend virtually their entire life in their burrows. But the lucky finding suggested that they might leave home more frequently than supposed, and gave the researchers an opportunity to find out why. Over the next two years they returned to the site armed with infrared cameras to catch them in the act. Since each zokor lives alone, in a burrow that it doesn't share with others of its kind, it was only necessary to place a camera by each entrance they could find to prove that the one-off observation wasn't a rare fluke.

It wasn't, and they were able to capture images of five different zokors - all female - moving about above ground several times a day over a period of a week or so, before returning to their burrows for a prolonged period. But why?

Two obvious possibilities present themselves, both due to the fact that zokors live alone. Firstly, at some point, the young have to leave their mother's burrow to wander off and find somewhere to dig for themselves. But they'd really only have to do this once in their lives, and, besides, these were full-grown adults which returned to their burrows once they'd done whatever it was they were doing, which doesn't fit with that explanation.

The second reason is, as so often, sex. In order for the species to survive, at least one of the two sexes has to go out searching for a member of the other at least some of the time. Even if the zokors lived in colonies - which they don't - they'd likely have to leave to find mates just in order to maintain genetic diversity.

The thing is, we know when zokors breed, and most of the times they were spotted travelling above ground were outside of the breeding season. The researchers also argue that, since they only spent, on average, just over ten minutes above ground per trip, they likely didn't have time to do much, especially given that the radio-tracking evidence showed that they seemed to be staying apart from their neighbours.

The camera images, however, provided a clue as to what the animals were really doing, because they were seen bringing back plants to their burrows at the end of their short excursions. These weren't the grasses that dominate the local region, but flowering herbs that grow amongst them, including lousewort and Chinese globeflower. That they're only doing it at certain times of the year suggests that temporary shortage was leaving the zokors hungry enough to risk a potentially dangerous trip to find food. Indeed, when the researchers tried to perform the same study the following year, the zokors didn't come out at all, so the problem might not even be a regular one.

As to why all the zokors seen above ground were female, there's a possible reason for that to - although, with a sample of only five, it might just be a coincidence. That's because, while it's a little late for the breeding season, the time in July that were seen would map perfectly to when mothers are nursing their young. Producing milk puts a strain on mother mammals, and it so happens that the plants they were seen carrying back to eat are high in lipid content - just the thing for boosting milk production. A temporary lack of suitable roots from their usual diet, perhaps due to the weather that year, might affect nursing mothers more than it does the males.

It was a short-term study, so we can't say that nothing of the sort ever happens at other times of year. For one thing, even if they weren't travelling to mate on this occasion, they must still have to do so eventually. But it seems that, if there's one thing a mother rodent will risk her life to do, it's feed her children.